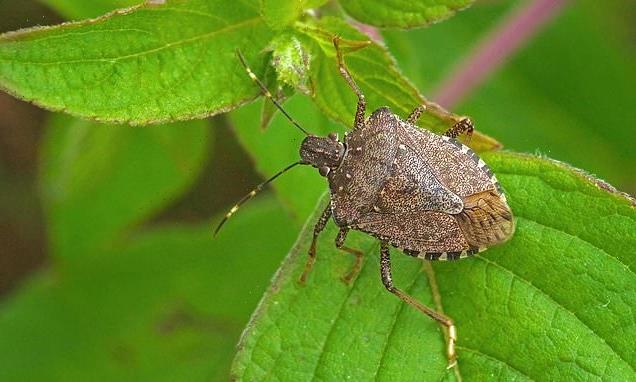 That’s all we need… a plague of STINK BUGS: After Covid, the fuel crisis and tax rises – foreign invaders have arrived that reek to high heaven and decimate fruit and veg

After a global pandemic, acute fuel shortages, the spiralling costs of fertilisers, a dearth of pickers and an appallingly rubbish summer, what slice of merry Hell will Britain’s farmers face next?

A catastrophic flood or perhaps a typhoon? No, actually something rather smaller — and an awful lot smellier.

Because the latest terror to hit the UK — captured this week at the flagship garden of the Royal Horticultural Society, Wisley, in Surrey — is the marmorated stink bug, a mottled insect that is native to China, Japan and Korea.

Though it is tiny (smaller than a fingernail), it sucks the juice — and life — out of fruit plants, invades people’s homes, attacks more than 100 plant species including raspberries, apples, pears, peaches and plums and is capable of destroying entire crops.

To add insult to injury, as it sucks and slurps, it often emits a smell best described as a ‘cross between stale farts, rotting rubbish and rancid almond’. 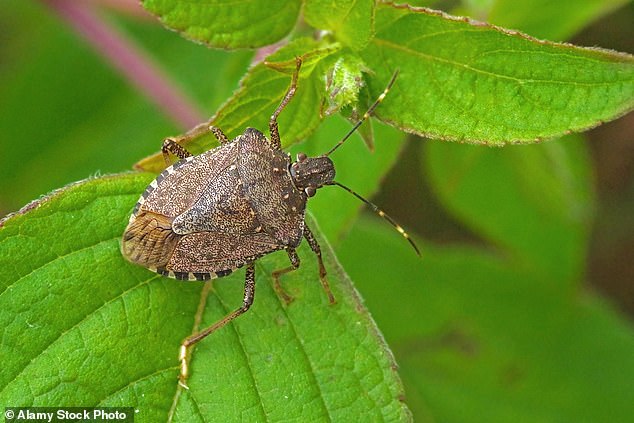 The latest terror to hit the UK — captured this week at the flagship garden of the Royal Horticultural Society, Wisley, in Surrey — is the marmorated stink bug (stock image)

Over recent years, it has caused millions of pounds of damage to crops in Europe and the U.S., where it has reached plague proportions, invading homes in the thousands and, lately, both Britain’s farmers and entomologists have been braced for its arrival.

Now it is here, a type of shield bug — of which we already have more than 40 which pose no threat to plant life — but different, with a rectangular-shaped head and a voracious thirst.

Last year, a stink bug (real name Halyomorpha halys) was trapped at Rainham Marshes nature reserve, Essex. Since then, they have been sighted in London and Hampshire.

This week, it was caught by scientists from the National Institute of Agricultural Botany (NIAB), based in East Malling, Kent, who set sex pheromone traps hung from trees across the South East, including at RHS Garden Wisley.

It is not yet clear whether the lone adult caught each time had simply hitchhiked into the UK and been caught or, more likely, was a sign that the species is breeding locally, indicating a secret stink bug population.

Many scientists insist it is simply a question of ‘when, not if’ the pest settles in southern England before rampaging across the UK.

If it does, the implications are appalling. Because this bug survives by piercing the tissue, or flesh, of a plant to extract the fluids.

This, in turn, causes deformation of seeds, pitting and scarring of the fruit, making it unsuitable for sale, and damage to the plant structure, stunting growth and with the potential to wreck entire crops.

After being accidentally introduced to the U.S. in the late 1990s — most likely in shipping crates from China or Japan — the bug was first spotted in 1998. 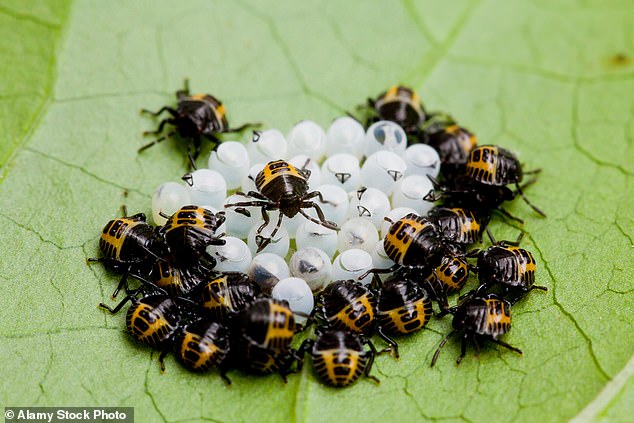 It has caused millions of pounds of damage to crops in Europe and the US, reaching plague proportions, and Britain’s farmers have been braced for its arrival (stock image)

Within 12 years it was causing £26.5million-a-year losses to the apple crop alone, and has since been detected in 40 American states, attacking more than 100 plant species, including raspberries, pears, peaches, plums, corn, soya… the list goes on.

It then popped up in Switzerland in 2004 and has since raced across Europe, decimating crops of soft fruit in every country it has infested.

No wonder our beleaguered farmers are terrified.

Researchers from Scotland’s Rural College in Aberdeen fear the bugs will thrive in the warm polytunnels used by soft fruit growers in areas such as Tayside.

Members of Britain’s burgeoning wine industry are also worried. If significant numbers of stink bugs move into bunches of grapes, their smell can contaminate the delicate flavours of a wine.

Naturally, allotment societies are abuzz with the news. But stink bugs are not just after our crops. This time of year, they’re seeking shelter and warmth in your garden shed, garage or, ideally, a spare bedroom.

They creep in through teeny cracks in window and door frames, form what has been described rather revoltingly as ‘a crust of moving bugs’ on the inside of the glass and settle in for the winter.

Which is all very well until they’re disturbed or alarmed and start releasing their very putrid smell — which can cause allergic reactions in some people — from glands in their knee joints.

And while they are not poisonous and don’t transmit disease, they do bite humans, are frustratingly difficult to catch and require professional exterminators. Rather alarmingly, it goes without saying the bug in Wisley is not a one-off.

The Natural History Museum says it has also recorded a stink bug in the county — in the home of a woman who had contacted their insect experts via a Facebook group.

As part of a wider study, scientists at the museum and the horticultural research institute NIAB EMR have found evidence of the stink bug in multiple areas of the UK.

Yesterday, Dr Glen Powell, head of plant health at the RHS, said his team was searching for signs of a colony and likened it to the Harlequin ladybird.

The Harlequin only arrived in the UK from Asia in 2004 but, thanks to its penchant for devouring other ladybirds’ eggs and larvae and out-competing native species for prey, rapidly became one of our most common ladybirds.

For all that though, the future is perhaps not quite as bleak as it could be. Firstly, our climate and growing season isn’t as conducive as it is in much of the U.S. and Europe.

Also, blessedly, they don’t breed quite as fast as you’d imagine — certainly not at the rate of aphids — laying between two and three rounds of about 30 light green eggs on the underside of leaves each year.

Most of those are spoiled by wasps, one of their many effective predators, along with birds, spiders, beetles and other bugs. 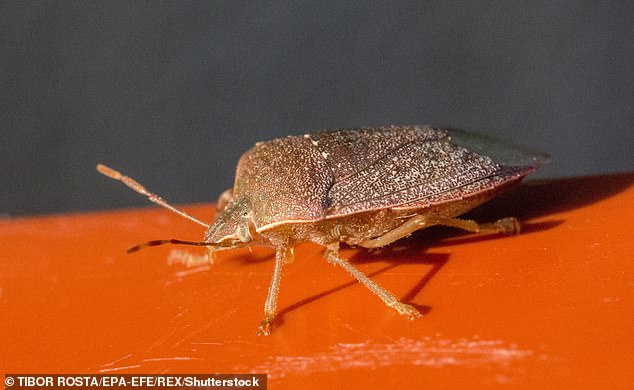 Last year, a stink bug (real name Halyomorpha halys) was trapped at Rainham Marshes nature reserve, Essex. Since then, they have been sighted in London and Hampshire (stock image)

Even so, steps clearly need to be taken. Not least to determine how on earth they’ve got in.

Buglife CEO Matt Shardlow puts it down to imported pot plants — although not via the foliage, but in the soil.

‘Plants get a health certificate but not the soil they’re sitting in, so there could be a whole batch of eggs or worms, or something else hibernating,’ he says.

‘There are no checks at all, so we’re getting hundreds of invasive species arriving in the UK. We have to be more careful with our border.’

He’s quite right. The cost to the national purse caused by the import of invasive species is a staggering £122 million a year.

So how at risk are we really from this smelly imposter?

According to Dr Powell, it isn’t ‘a sudden invasion but potentially a gradual population build-up and spread, exacerbated by our warming world’.

Shardlow, however, is a teeny bit more upbeat. ‘By the time they come to light, it’s usually too late, but we may get away with this,’ he says. ‘We’ll just have to wait and see…’

In the meantime, if you find what you think could be a stink bug in your fruit tree, garden, allotment or spare bedroom, don’t try to catch it, don’t alarm it — unless you’ve got a very robust nose — and don’t squash it.

Get in touch with Defra — and thank your lucky stars you’re not a fruit farmer.

CategoryWorld News
Tagsarrived Bugs have reek that to

How to watch tonight’s game.