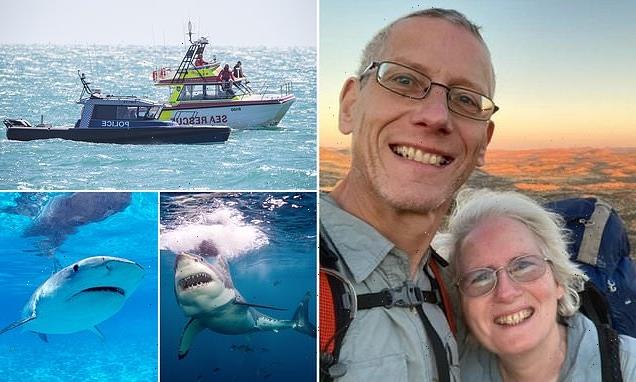 Was British father killed by TWO sharks off Australian beach? Cops probe reports swimmer, 57, was attacked by 14ft Great White AND a Tiger shark before being ‘dragged under’

A British father who was killed by a ’14ft Great White Shark’ as he swam off the coast of Western Australia while his helpless wife watched from the shore may also have been attacked by a second shark.

Paul Millachip, 57, was set upon by the Great White while swimming at a beach in North Fremantle in Perth on Saturday morning around 10am according to several eye-witnesses.

But it emerged this morning that Perth police are investigating further accounts that Mr Millachip was also attacked by a Tiger shark before he was pulled under the water.

One witness said he could only watch in horror as Mr Millachip was ‘dragged under’. ‘I saw the man struggling in the water, and then there was a commotion with a tinny [metal dinghy] coming over surrounding the guy and that was the last they saw of him,’ he told a local newspaper.

Mr Millachip’s wife, Thirl, 59, said her husband of 32 years ‘died doing what he enjoyed doing the most, which was exercising’.

‘Rest in peace, Paul. He died (doing) what he enjoyed doing the most.

A large search effort happened over two days at Port Beach but all that has been found is a pair of swimming goggles. The search was called off yesterday evening. 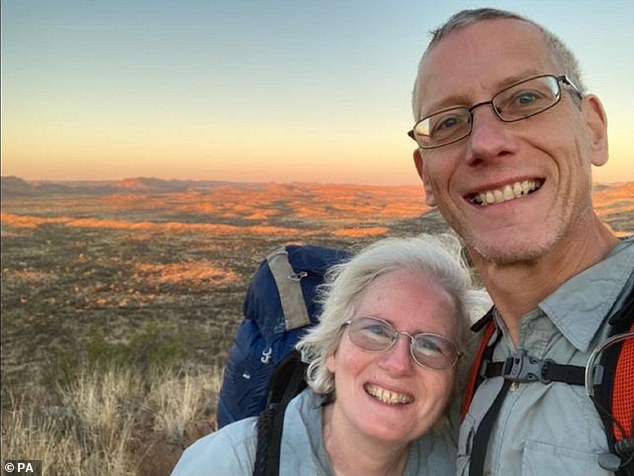 Paul Millachip, 57, and his wife Thirl, 59, were at Port Beach in North Fremantle when Mr Millachip was attacked by a Great White shark off the coast of Perth, Australia 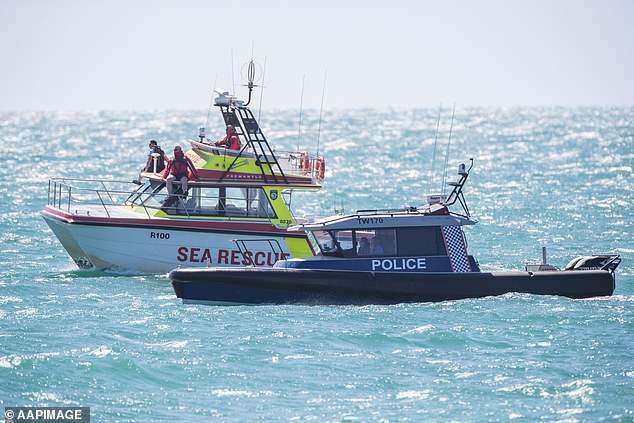 It emerged this morning that Perth police are investigating further accounts that Millachip was also attacked by a Tiger shark, which joined in the frenzy after the Great White’s initial assault, before he was pulled under the water (pictured: police and sea rescue vessels searching for Millachip on Saturday) 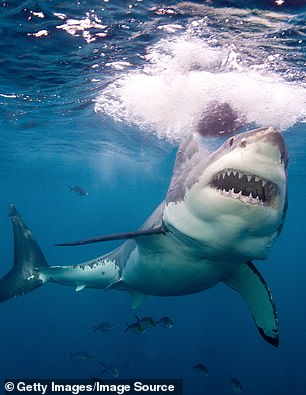 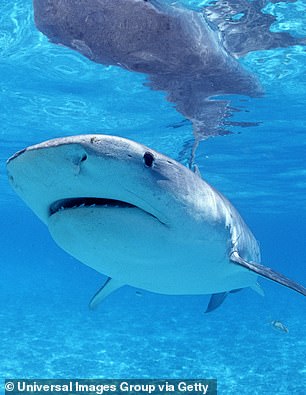 Mr Millachip, who was killed by a Great White shark (left) as he swam off the coast of Western Australia while his helpless wife watched from the shore may also have been attacked by a Tiger shark (right)

While Great White sharks are arguably the world’s most recognisable species of shark, Tiger sharks are known to be among the most dangerous and likely to attack humans.

Tiger sharks are found in the warm waters around all of northern Australia, extending south to Perth in the west and Bass Strait in the east.

Mrs Millachip thanked authorities for ‘being extremely thorough’ and the support of friends as their families are both in the UK.

Four teenage boys who were on the sand said they saw the shark and zipped along the shoreline in their dinghy frantically warning other swimmers and surfers to get out of the water.

‘I didn’t see exactly what type the shark was but it was mammoth. From the fin to the rear tail was pretty big distance,’ one of the teenagers said.

She also said she was grateful to the group of boys who had helped explain what happened.

‘It must have been an absolutely terrifying experience for them, so my heart goes out to them,’ she said, her voice wavering.

‘I thank them for what they did.

‘Amazing. They could potentially have saved other lives.’

The teenagers also called emergency services in the moments between spotting the attack and warning other beachgoers. 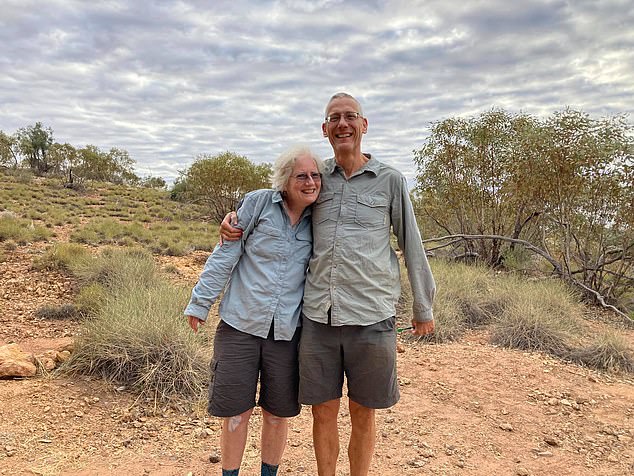 Mr Millachip’s wife, Thirl, 59 (left) said her husband of 32 years ‘died doing what he enjoyed doing the most’. She said: ‘Rest in peace, Paul. He was a wonderful man, a wonderful father, and he loved his exercise.’ 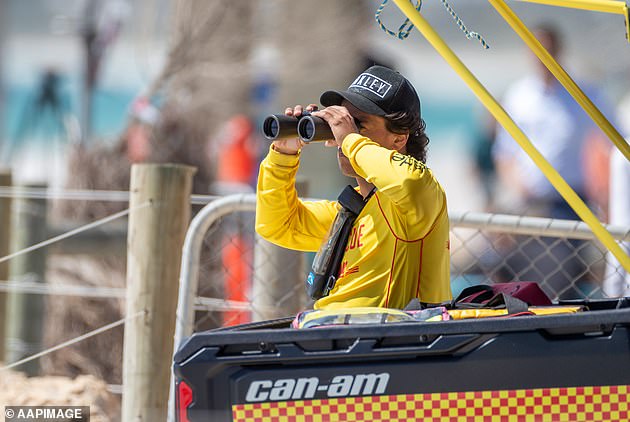 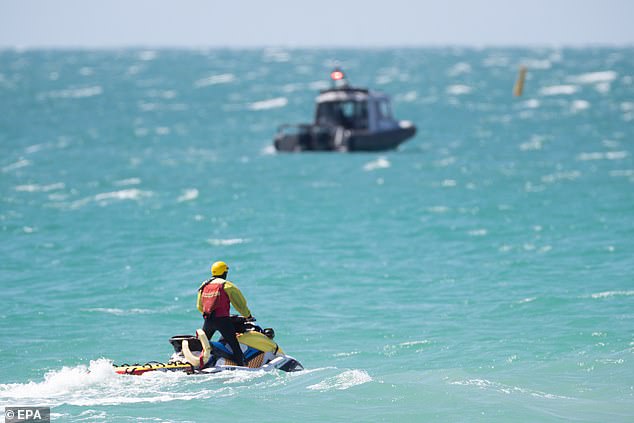 Search and Rescue vessels are seen patrolling off Port Beach in North Fremantle, Western Australia, Australia, 06 November 2021. Beaches along the coastline were closed following the attack on Saturday.

Mr Millachip who was originally from Willesden in London, had settled in Perth with his wife and regularly swam at the beach on Saturday morning.

‘We had been going down to the beach two or three times a week – we would go running first and then go swimming,’ his wife said.

‘He was due to swim for 1km on Saturday – I just went into the water and out again because it was cold and I’m not a huge fan of the cold water.’

Mr Millachip was a regular at the popular beach, and his wife and two adult children were there at the time of the attack.

‘I was… where the changing rooms are,’ she said.

Mr Millachip loved cycling and was an experienced swimmer who would compete in triathlons and marathons.

‘He’d done six Iron Men (competitions) down at Busselton, so he was fit and healthy.’ 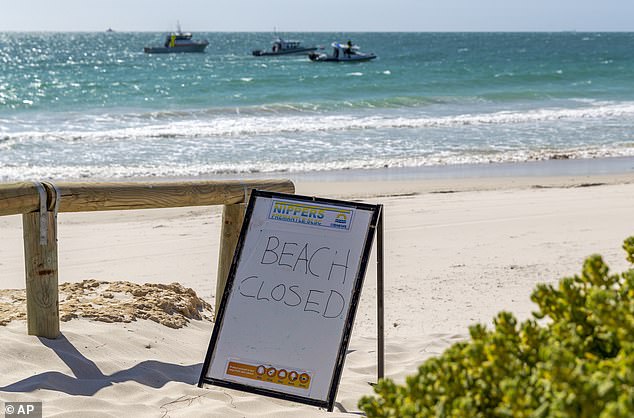 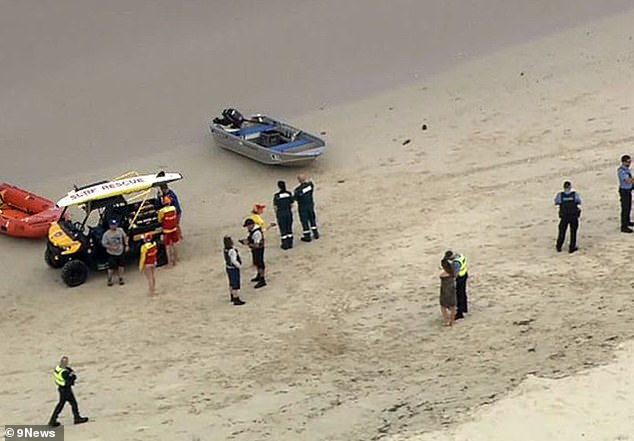 The attack happened at 10am (local time) at Port Beach, 16km south west of the centre of Perth

Police confirmed the extensive marine search for the father of two would be suspended on Sunday afternoon.

All beaches in the area will remain remain closed as of Monday.

Experts have since warned that there is likely a big shark lurking near ‘most popular beaches’ the majority of the time.

The latest incident follows warnings that shark attacks are increasing.

In the 1990s there were 82 recorded shark attacks in Australia, which jumped to 161 in the following decade.

Bond’s University researcher Dr Daryl McPhee said the rise in attacks worldwide was down to a number of factors including more people being on the water doing activities, in more remote locations, and also warmer oceans are forcing shark and their food supply to different areas. 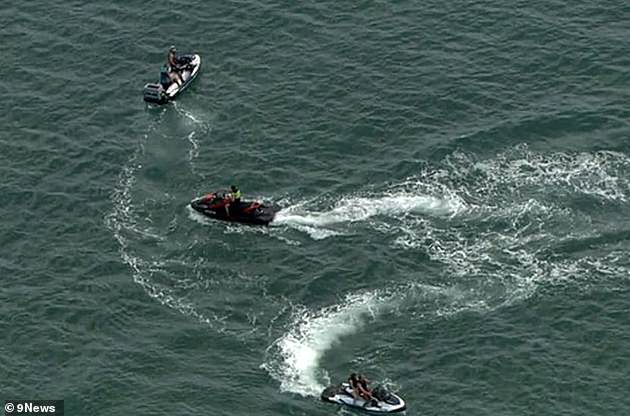 ‘There is a long term trend of an increasing number of shark bites in Australia and overseas,’ Dr McPhee told The Project.

‘Sharks are part of the marine environment and if we could track where every shark was you would find there would be a large shark on most popular beaches most days of the year.’

‘So we need to find ways to co-exist.’

Professor Callum Brown from Macquarie University said despite the increase in shark attacks they are still exceptionally rare.

He added that old school methods of shark control such as nets, drum lines, and culls were being replaced with newer methods which are potentially more accurate. 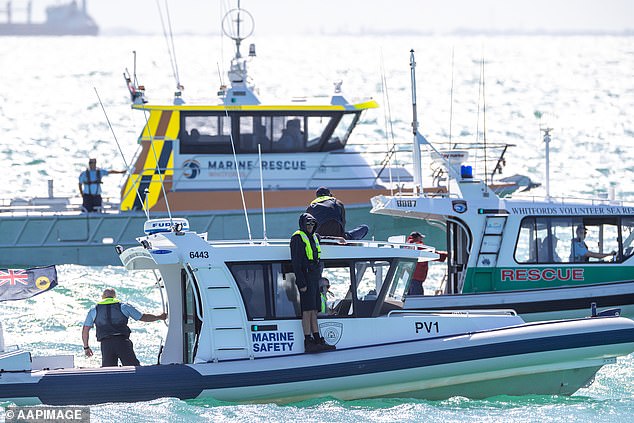 Water police were coordinating a marine search for the victim, who is understood to have been attacked 30m offshore

One such method is to deploy drones which scan the water and send images to an artificial intelligence computer which can accurately spot sharks.

There are also personal deterrents which work by emitting an electrical pulse but these have the be used within metres from a shark to be effective.

And finally there are camouflage wetsuit and surfboard decals which can prevent surfers from appearing like seals to hungry sharks.

‘Our fear is really, it’s driven by guts. Not really by any data or any sort of realistic estimate of what the actual risk is. You should be more scared of getting in your car.’ he said.

Over 80 per cent of 4,000 spots for in-person Stanchart Marathon taken up; 10km race sold out
World News