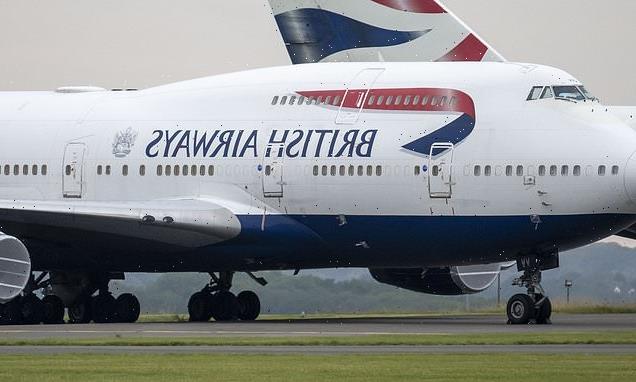 British Airways has apologised after a ‘technical’ glitch delayed passengers for hours while luggage piled high at Terminal 5 last night.

The issue caused multiple planes in the United States to be grounded before take off on Monday night, infuriating weary travellers.

Some reported being held on the tarmac for hours while cabin crew and pilots were left waiting on flight plans to get them to their destinations.

Meanwhile, passengers landing at Heathrow’s Terminal 5 also faced long delays for their baggage, with reports of a lack of ground staff to help planes dock. 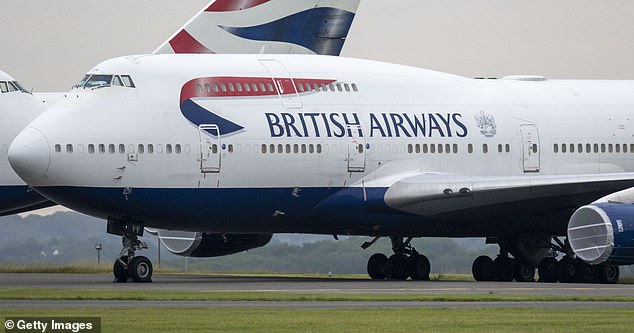 British Airways has apologised after flights out of the United States were delayed by a ‘technical’ glitch last night. Pictured: A BA branded Boeing 747 at Cardiff Airport

Video from inside the terminal shows hundreds of suitcases piled up high in the baggage reclaim hall, with passengers milling around waiting for their luggage.

Lorna Bryant, who arrived into the airport last night, told MailOnline the situation was a ‘nightmare’.

She said there were ‘hundreds, if not thousands, of suitcases dumped in a pile, unattended, awaiting staff to load them onto the conveyor belts’.

‘We have just been informed that baggage delays are expected to more than 90 minsutes,’ she said.

‘We also had delays when we landed. The pilot explained that there were no staff ready to assist them in parking the plane. No shuttle buses ready to take us to the terminal, either.’

She added there seemed to be ‘absolutely no staff,’ and that ‘the pilot even suggested we leave a bad review because they’re sick of the delays every time they land at Heathrow’.

In a statement, BA said: ‘Our flights due to depart the USA tonight are currently delayed due to a technical issue with our third-party flight planning supplier, which we are urgently investigating.

‘We’re sorry for any disruption this will cause to our customers’ plans, our aim is for these flights to depart as quickly as possible.’

‘This is not a safety issue. We are keeping our customers up to date and providing them with refreshments,’ the airline added.

BA has been contacted for comment about the delays at Terminal 5.