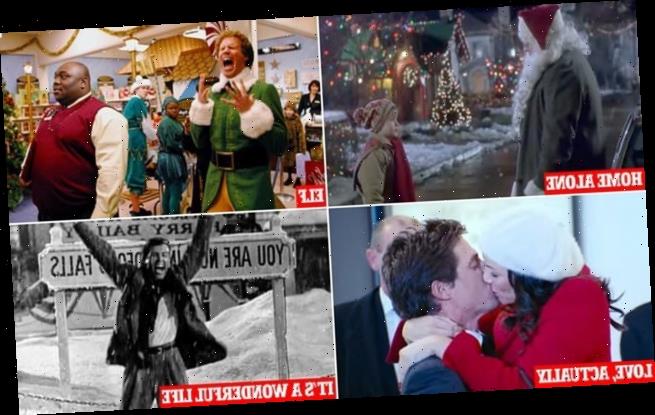 Britain's favourite Christmas movie moments – did yours make the list?

Scenes from Home Alone, Elf and Love Actually are named among Britain’s best-loved Christmas movie moments – but did your favourite make the list?

Scenes from Home Alone, Elf and Love Actually have been named among Britain’s twenty best-loved Christmas movie moments of all time.

The top spot, with 23 per cent of the votes, went to the scene in the festive comedy Home Alone when Kevin McCallister asks Father Christmas for his family back.

The 90s film classic also bags the number two spot for most the second magical Christmas film scene, where Kevin stages a fake house party to ward off the burglars.

Other favourite scenes which featured high on the list include the moment in Elf where Buddy finds out Santa is coming to town and exclaims: ‘SAAANTAAAA’.

Festive rom-com Love Actually also featured on the list for the scene when Hugh Grant as prime minister snatches a kiss with Natalie.

The study by Vue, which polled 1,500 film fans, found that two thirds of Britons said that watching a festive flick officially marks the beginning of the Christmas season.

On average people will watch six festive films this year – with UK women expected to get through seven Christmas films, compared to five for men.

Here is the complete list – but did your favourite make the top twenty? 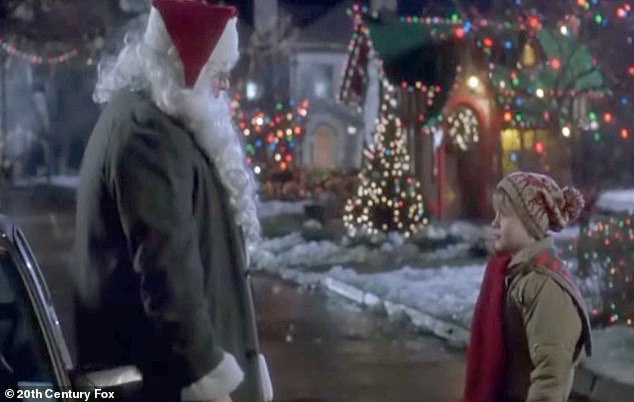 Eight-year-old Kevin McCallister goes to see ‘Santa Claus’ and tells him that although he knows he is not the real Santa, he would like him to pass on a message to Santa.

‘This is extremely important,’ he says. ‘Would you please tell him that instead of presents this year, I just want my family back? No toys, nothing by Peter, Kate, Buzz, Megan, Linnie and Jeff.’

2. Home Alone: Kevin stages a fake house party and keeps the burglars away (21%) 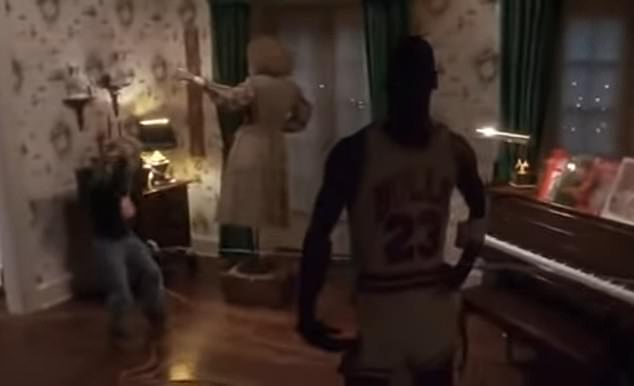 Kevin stages a fake ‘house party’ with cardboard cutouts and mannequins on strings and blaring music to deceive Marv and Harry (Home Alone, 1990)

Knowing that burglars are trying to break into his house, Kevin stages a fake ‘house party’ with cardboard cutouts and mannequins on strings and blaring music.

When Marv and Harry pull up outside the home later that night, they see shadows of people moving about inside and decide to return another night.

3. Elf: Buddy the elf learns Santa is coming to town and exclaims ‘SAAANTAAAA’ (21%) 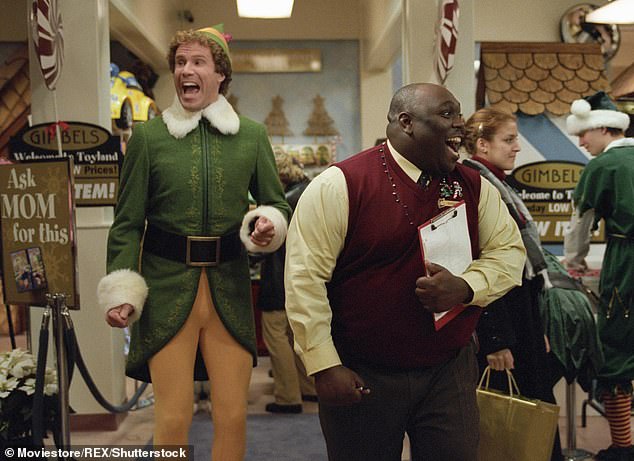 Buddy the elf cannot contain his excitement when he hears Santa is coming to town (Elf, 2003)

Buddy the elf is standing in a New York department store when a manager announces: ‘Okay people tomorrow morning, 10am, Santa’s coming to town.’

Buddy cannot contain his excitement and leaps up and down yelling, ‘SAAANTAAAAA! Oh my God! Santa, here? I know him. I know him.’ 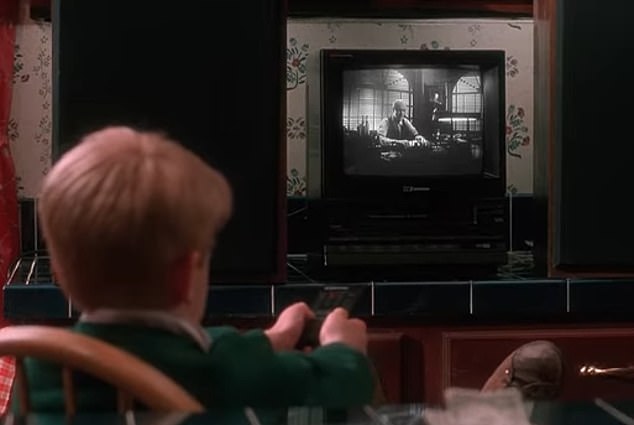 Kevin plays quotes from a gangster movie to respond to a pizza delivery boy to trick him into thinking there is an adult in the house (Home Alone, 1990)

Kevin orders a pizza to the house but doesn’t want the delivery man to realise he is at home without his parents.

He plays quotes from a gangster movie in response to the pizza boy’s questions including the classic line, ‘Keep the change, ya filthy animal.’

The iconic quote is later used in the second film when Kevin finds himself lost in New York.

5. The Polar Express: The boy finds his belief in Santa and hears the bell ring (17%) 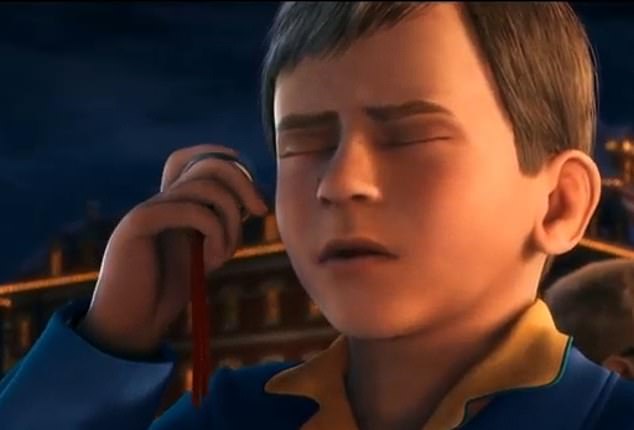 The boy rings the bell and he and his sister marvel at the beautiful sound but his parents are unable to hear it since they don’t believe in Santa (The Polar Express, 2004)

On Christmas morning, the boy opens a box and discovers that it contains the bell he lost. It was delivered by Santa along with a note explaining that he found it on the seat of his sleigh.

When the boy rings the bell, he and his sister marvel at the beautiful sound but his parents are unable to hear it as they don’t believe in Santa. 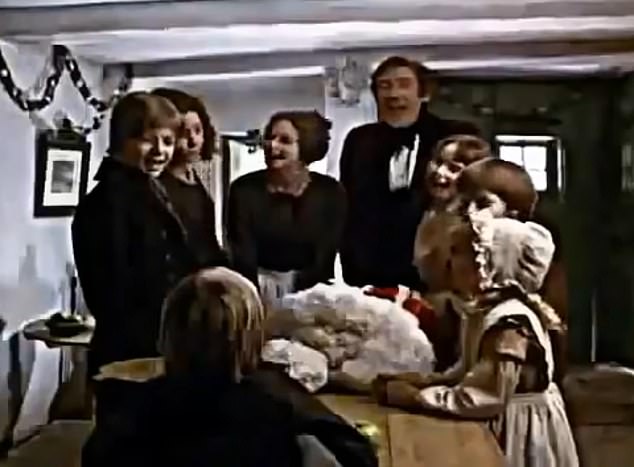 The Cratchit family rejoice at the surprise of the bird sent by Scrooge and Tiny Tim announces ‘God bless us all, everyone!’ (A Christmas Carol, 1984)

The reformed and generous Scrooge sends an enormous turkey to his poor clerk Bob Cratchit’s house for his family to eat for a Christmas feast.

The family rejoice at the surprise and Tiny Tim announces ‘God bless us all, everyone!’

The touching scene comes after Scrooge is shown the error of his ways and realises he must change. 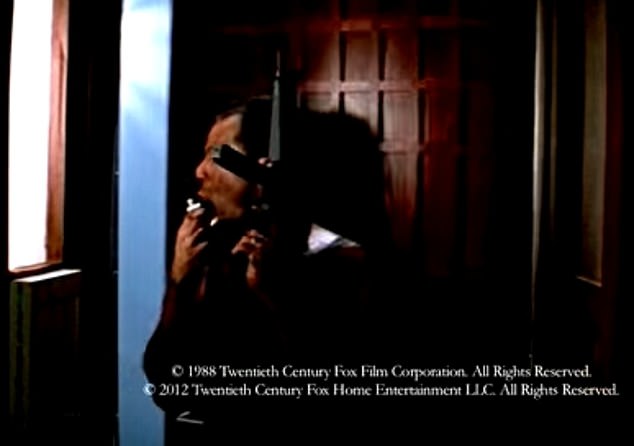 John McClane speaks with Hans Gruber over the radio with Hans comparing him to famous American cowboys. Hans asks him: ‘Do you really think you have a chance against us, Mr Cowboy?’

8. The Snowman: James wakes up in the morning to see the snowman has melted (16%) 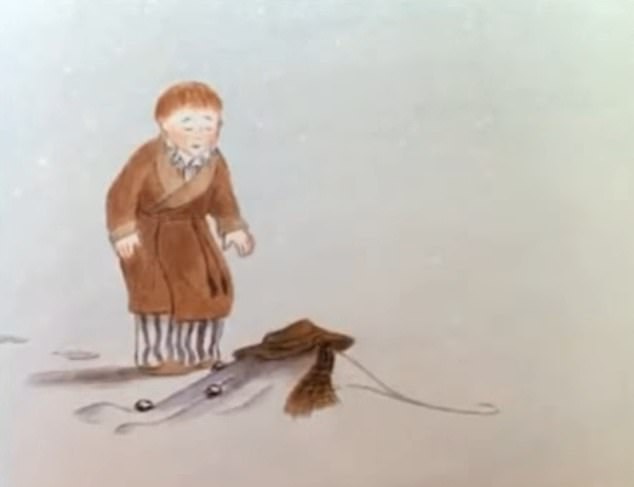 The final scene of the 1982 animated classic The Snowman, sees James wake up on Christmas Day to find that the snowman has melted.

He reaches into his pocket to find the scarf Father Christmas gave him, confirming that the magical adventure with the snowman the night before wasn’t a dream. 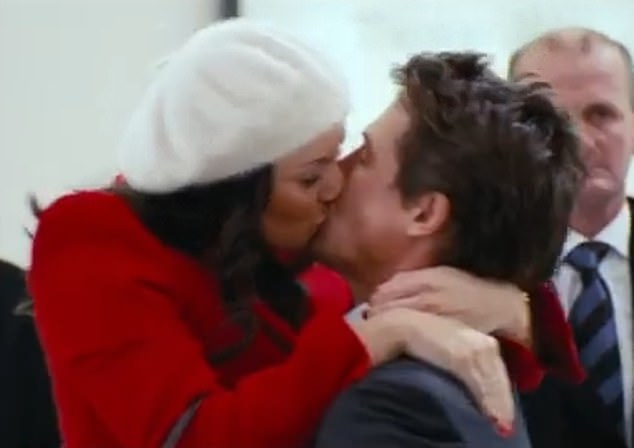 Natalie and David share a kiss as the curtain rises in the final scenes of Love, Actually (2003)

Hugh Grant as the prime minister, David, and Natalie try to keep from being seen and watch the show from backstage, where they finally kiss.

However, as the curtain rises they are seen kissing by everyone in the audience.

The embarrassed pair take a bow and wave to the crowd before walking off stage. 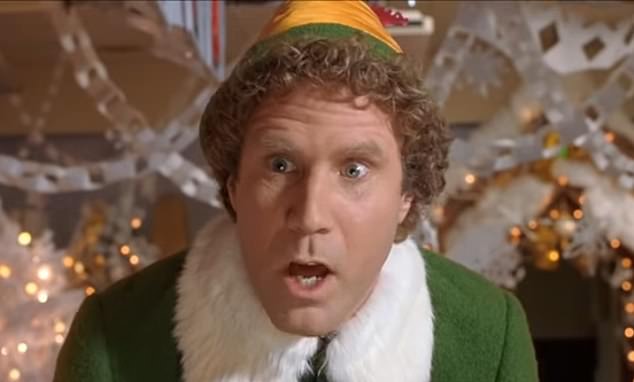 When Buddy realises that the Santa at Gimbels department store is not the real Santa, he unmasks him and causes a wild tumult in the store that lands Buddy in jail.

‘You disgust me. How can you live with yourself?’ he says to the fake Santa. ‘You sit on a throne of lies.’ 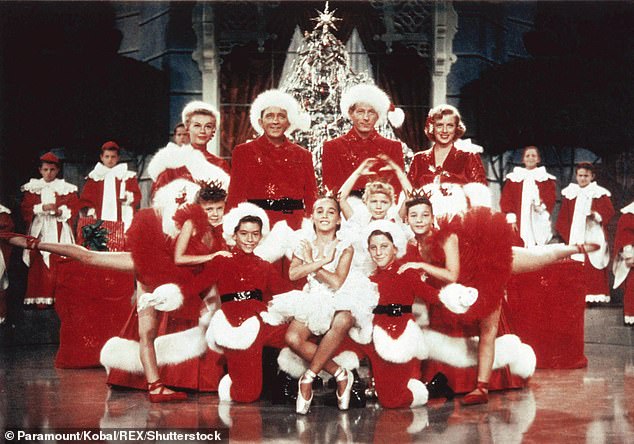 The final scene of the 1954 American musical is a performance of the song White Christmas to a roomful of American soldiers on Christmas Eve.

During the performance, Betty and Bob become engaged, and Judy and Phil decide to go through with their own engagement. 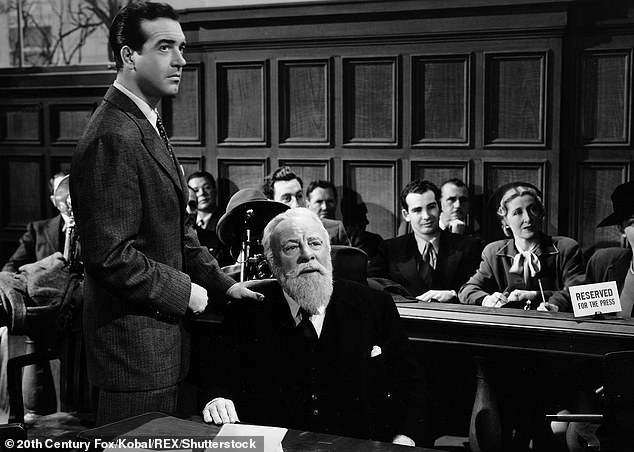 When Kris Kringle surprises customers and employees alike by claiming that he really is Santa Claus, it leads to a court case to determine his mental health and, more importantly, his authenticity.

As evidence in court to prove Kringle is the real ‘Santa Claus’ the judge is presented with letters addressed simply to ‘Santa Claus’ that were just now delivered to Kris, asserting that the post office has acknowledged that Kris is the one and only Santa Claus. 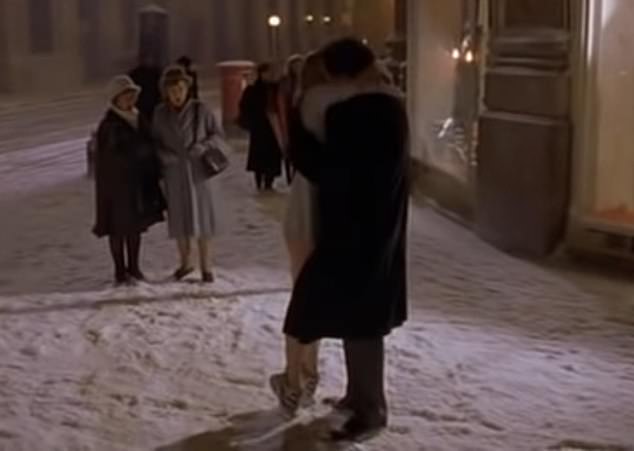 In the final scene of Bridget Jones’s Diary (2001), the protagonist runs outside after Mark Darcy in the snow wearing only her tigerskin-print underwear, a vest top and a thin cardigan.

Bridget attempts to apologise to Mark for the unflattering comments about him in her diary, telling him: ‘I’m so sorry, I never meant it.’

Mark then reveals a new diary he has bought for Bridget for a ‘new start’ and the pair embrace.

14. The Grinch: Cindy Lou invites the Grinch to Christmas dinner (14%) 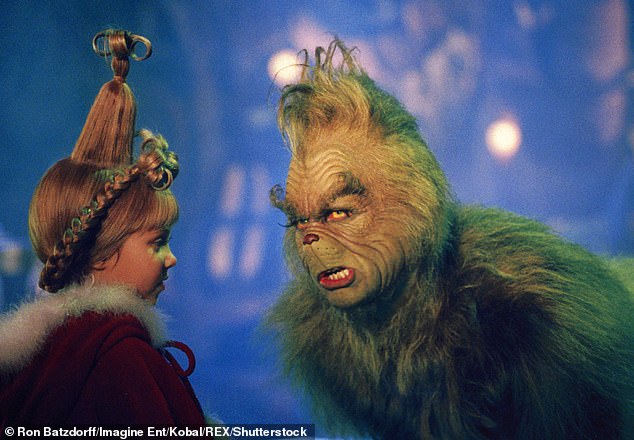 After the reformed Grinch returns everything he stole, Cindy Lou invites him to her family’s Christmas dinner.

Cindy tells him: ‘Mr Grinch I came to invite you to the Holiday Cheermeister.’ 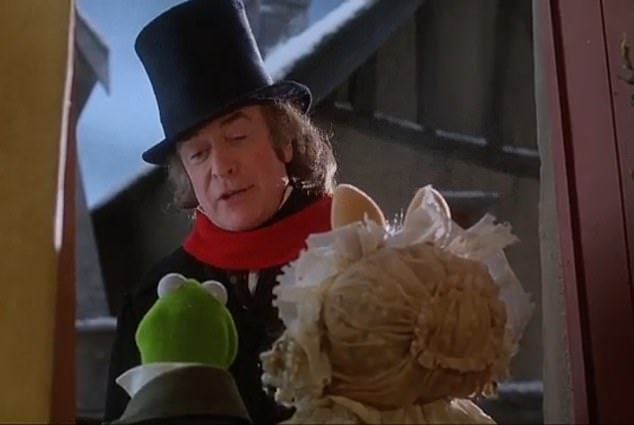 Michael Caine as Scrooge and Kermit the frog as Bob Crachit in The Muppet Christmas Carol, a 1992 musical fantasy comedy film

Scrooge goes to the Cratchit house on Christmas Day, at first putting on a stern demeanor before revealing he intends to raise Bob’s salary and pay off his mortgage. 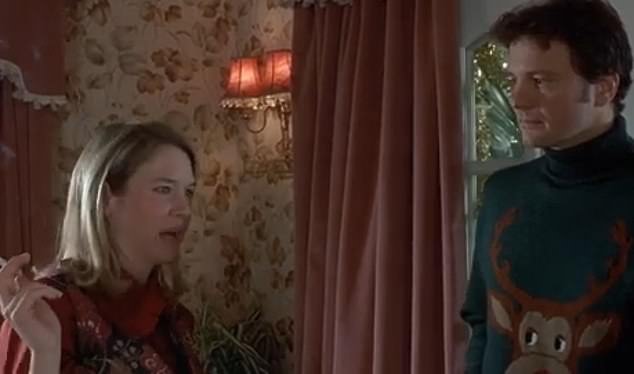 Bridget is introduced to Mark Darcy at her parents party and is disgusted by his novelty Christmas jumper (Bridget Jones’s Diary, 2001)

At her parents Christmas party, Bridget is introduced to Mark Darcy, a childhood acquaintance and barrister, son of her parents’ friends.

Mark finds Bridget foolish and vulgar and Bridget thinks Mark is arrogant and rude, and is disgusted by his novelty Christmas jumper.

17. It’s A Wonderful Life: George runs through the streets of Bedford Falls after deciding he wants to live (13%) 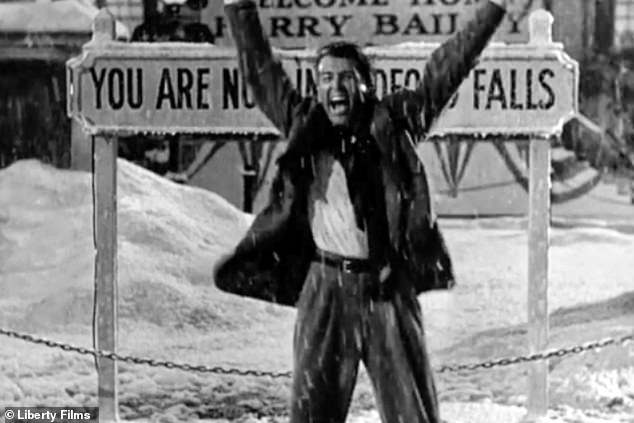 A grateful George rushes home through the snow-covered streets of Bedford Falls (It’s a Wonderful Life, 1946)

After Clarence the angel, shows George a timeline in which he never existed he returns to the bridge and begs for his life back.

The original reality is restored, and a grateful George rushes home through the snow-covered streets of Bedford Falls.

As winter approaches its end, Jack tells a disheartened Charlie that he has to leave but he will be with him wherever he goes (Jack Frost, 1998)

Jack tells a disheartened Charlie that he has to leave but he will be with him wherever he goes.

After saying farewell and giving his love to both his wife and son, he returns to the afterlife.

19. Frozen: Anna freezes herself to save her sister Elsa in an act of true love (13%) 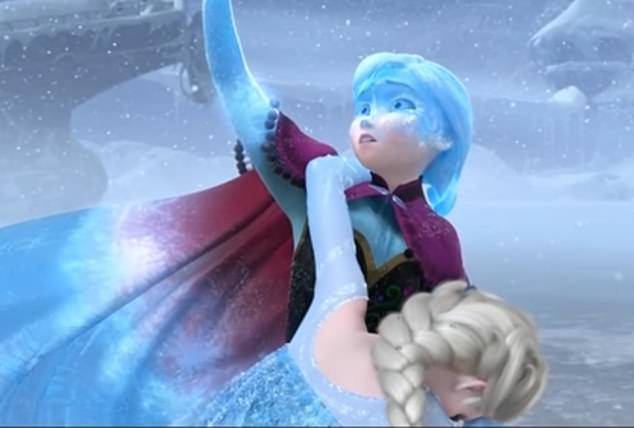 Anna leaps in the way and freezes solid, stopping Hans from killing her sister (Frozen, 2013)

Anna spots Hans about to kill Elsa and leaps in the way and freezes solid, stopping Hans.

Devastated, Elsa hugs and mourns over her sister, who thaws out, her heroism constituting ‘an act of true love’.

20. Muppets’ Christmas Carol: Michael Caine’s Scrooge meets the Ghost of Christmas Present and they sing ‘It Feels Like Christmas’ (13%) 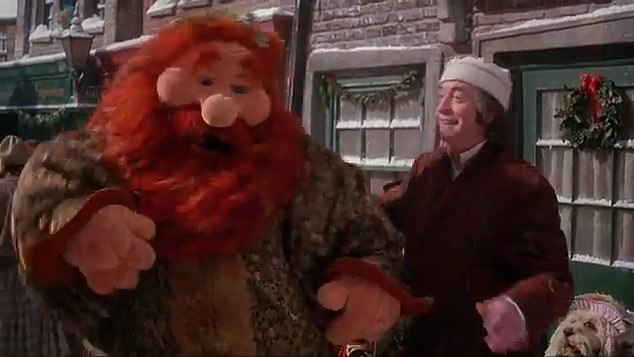 Scrooge meets the gigantic and merry Ghost of Christmas Present who shows him the joys and wonder of Christmas Day.

The jovial character, who has the ability to enter any room simply by touching its walls, shows Scrooge how families celebrate the festive day as he sings ‘It Feels Like Christmas’.

He explains to the cold-hearted protagonist that Christmas is ‘the season of the heart’ and says it is important to ‘make it last all year’.