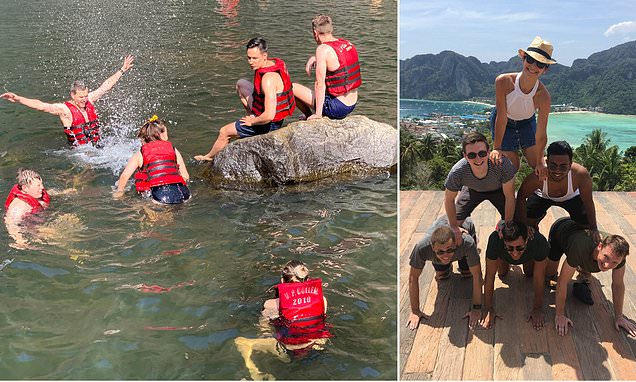 Are these Britain’s best bosses? Tech gurus take their staff on month-long trips to Thailand, Mexico and India and offer them UNLIMITED paid annual leave

A pair of tech gurus have been branded Britain’s best bosses after taking their staff on month-long holidays to Thailand, India and Mexico.

Mike Bandar, 29, and James Vardy, 31, also let all nine of their employees take as much paid leave as they like and work from whatever location they fancy.

So instead of being chained to their desks, staff at Turn Partners have spent working days swimming with sea turtles in Playa del Carmen, Mexico, staying in five-star hotels in Mumbai and going jet skiing off Thai beaches.

Their business, which has offices in London and Birmingham, is a digital ‘startup studio’ which makes more than £1million per year and helps create and invest in apps and websites.

Products they have developed include Hopper HQ, a tool that helps celebrities schedule their Instagram posts, and Toyboy Warehouse, a dating site to match younger men with older women. 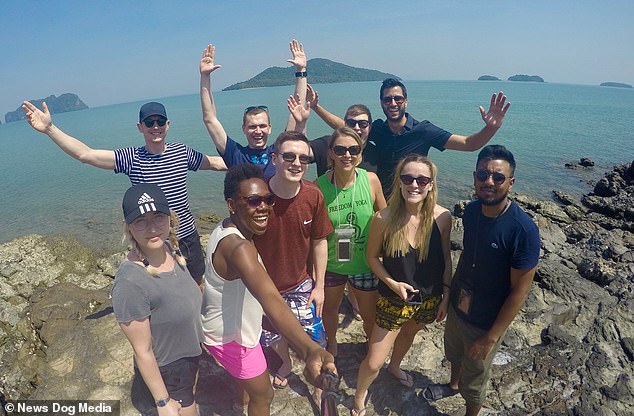 Mike Bandar, 29, back row, far right, and business partner James Vardy, 31, back row, far left, have been hailed as Britain’s best bosses for taking their employees on month long trips to Mexico, India and Thailand. They are pictured in Thailand in February 2018 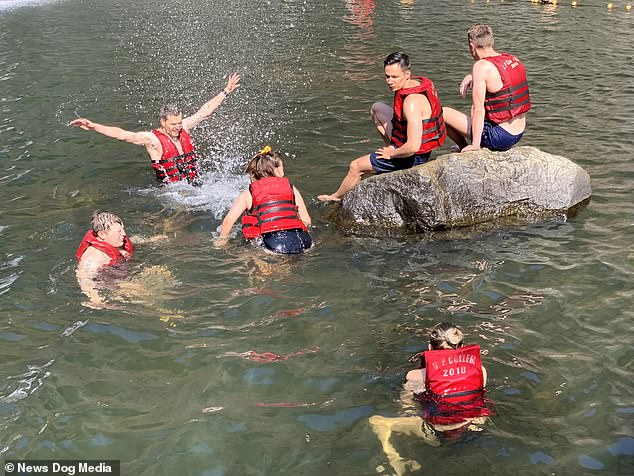 Their company Turn Partners develops apps and websites and employees have enjoyed working from idyllic locations while swimming with sea turtles and jet skiing off exotic beaches. They are pictured here swimming in Goa in February 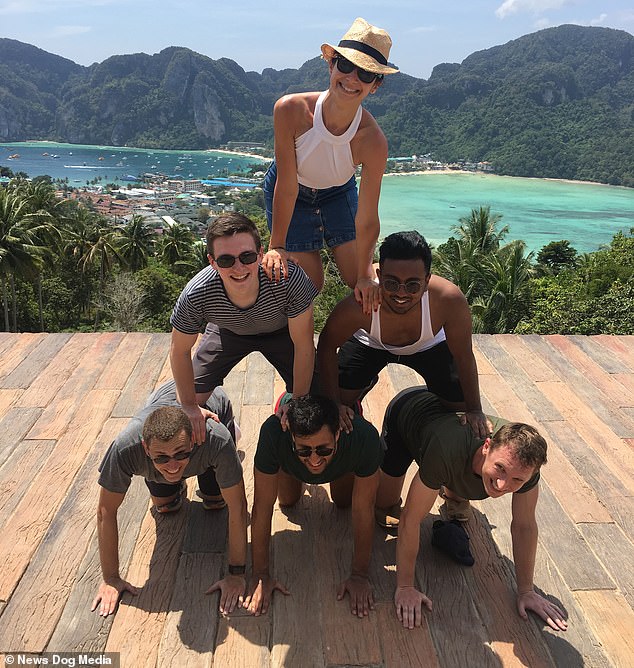 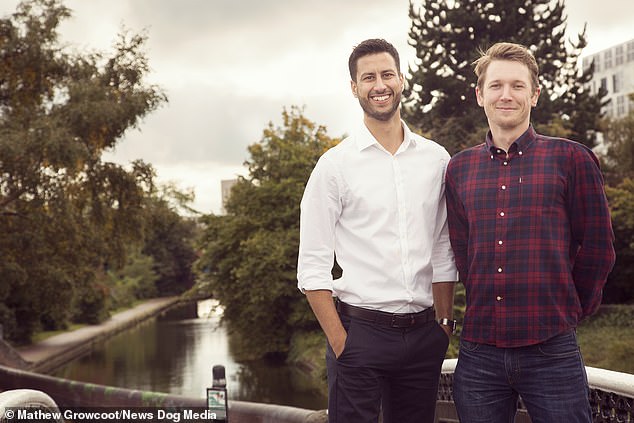 Mr Bandar, left, and Mr Vardy, right, who set up the company in 2013, say they believe a happy team is the backbone of a successful business

Mr Bandar said: ‘James and I had always dreamed of running a close-knit business where the staff have flexibility and can enjoy life to the full.

‘Having a an incredibly happy team always leads to creating amazing business. So from time to time, we like to treat our team to a month-long holiday so that we can all escape the cold British weather and not go too long without some sunshine.

‘Turn Partners covers the costs and although we generally go away for the month, staff can come and go for as long as they please.

‘Partners, friends and siblings often join at some parts of the trips which is always fun.

‘One of our staff even proposed to his fiancé in Thailand and all of the team threw a surprise party for them on the beach afterwards.’

He added: ‘We’ve gone to so many brilliant countries together and without a doubt, grown closer as a company. Buenos Ares, Argentina is the front-runner for our next group holiday.

‘Although our team trips are a real highlight they are also merely the tip of the iceberg. 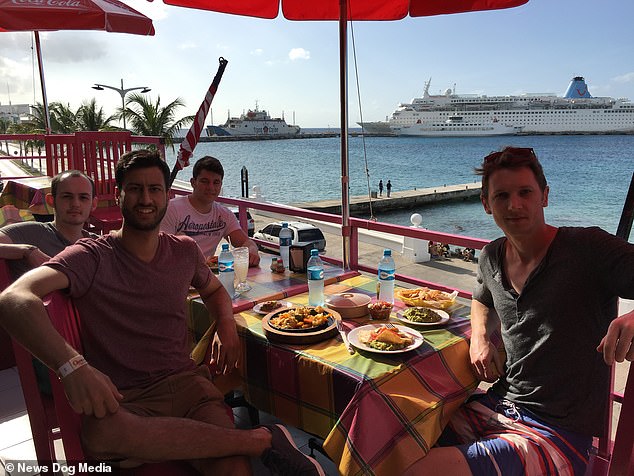 Another ‘working holiday’ took them to Mexico, pictured, in 2016, where they were able to work next to the beach 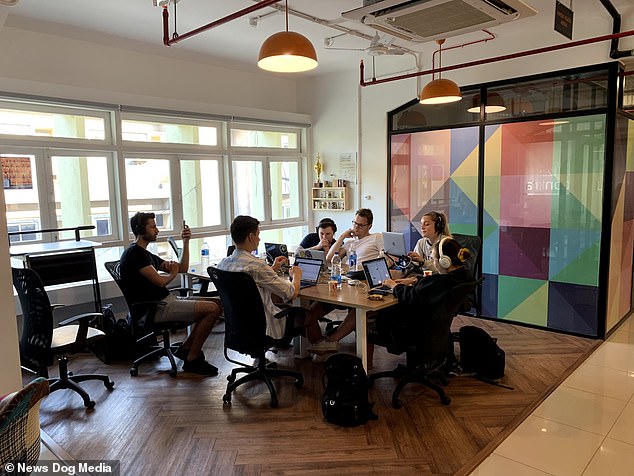 While they make the most of the time abroad, the team also perform their day to day tasks. Employees are pictured working at an office in Goa 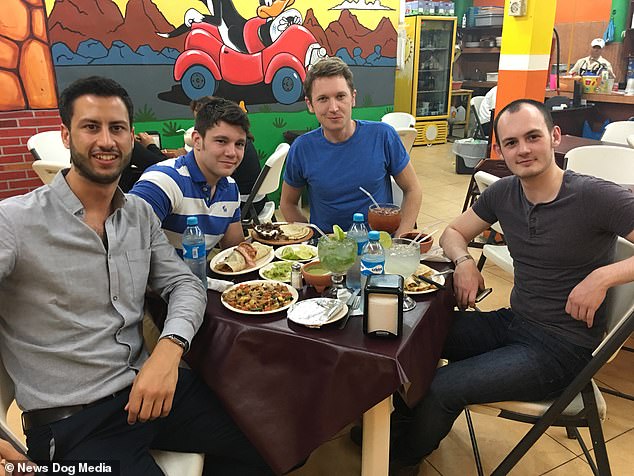 In February this year, the pair flew all nine of their employees for a month-long five-star holiday to Goa and Mumbai, India.

The previous February, the bosses treated their entire team to a 28-day vacation where they worked in the stunning surroundings of Bangkok, Chang Mai, Krabi and Phi Phi in Thailand.

Meanwhile in February 2016, Turn Partners all went on another month long break to Playa del Carmen and Tulum in Mexico – where they spent their working days on a beach.

Over the years employees have also worked remotely in Denmark, South Africa and The US.

Luke Lanchaster, a senior developer at Turn Partners, said: ‘I fixed a problem at work that was eluding me for months whilst sitting on a deckchair, listening to the rolling waves and generally having a great time on holiday. 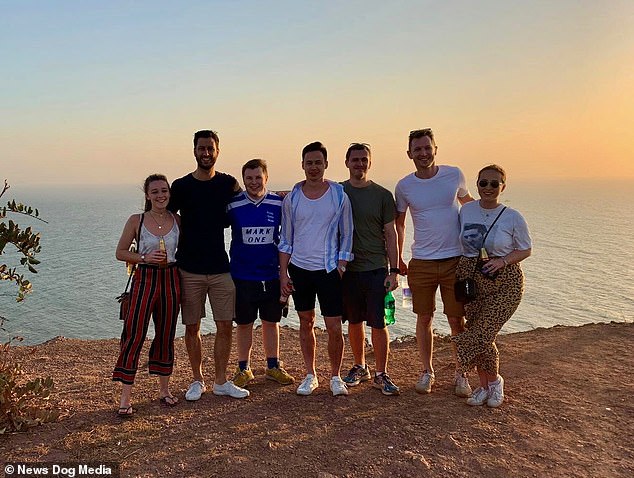 The team are pictured here in Goa. Products they have developed include a tool to help celebrities schedule Instagram posts and a dating site that matches younger men and older women 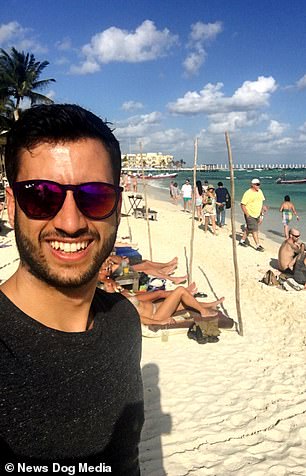 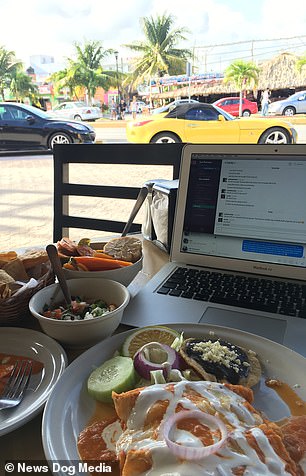 The firm does its day to day business out of offices in London and Birmingham but the bosses said they like to get away from the British weather from time to time. Pictured left is Mr Bandar on a beach in Mexico and right is the working lunch they enjoyed in the country in 2016 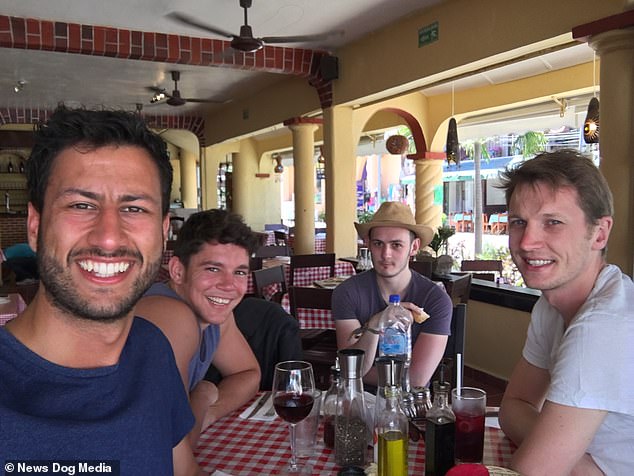 ‘For the whole month of February, I got to visit amazing places and explore hidden waterfalls in between conference calls.

‘There are so many jobs nowadays which involve employees sitting in a cubicle all day, clocking in and clocking out whilst having your output judged against KPIs.

‘Working for Turn Partners is amazing in that they’ve realized keeping employees happy, motivated and excited pays off dividends’.

Mr Bandar added the unlimited holiday policy they introduced has not caused been abused and had actually kept morale high and people in their seats.

He said: ‘It is actually quite the opposite, we introduced unlimited holiday from the belief that people who are well rested, happy, have time and flexibility are more fulfilled, more satisfied and more productive with better work. 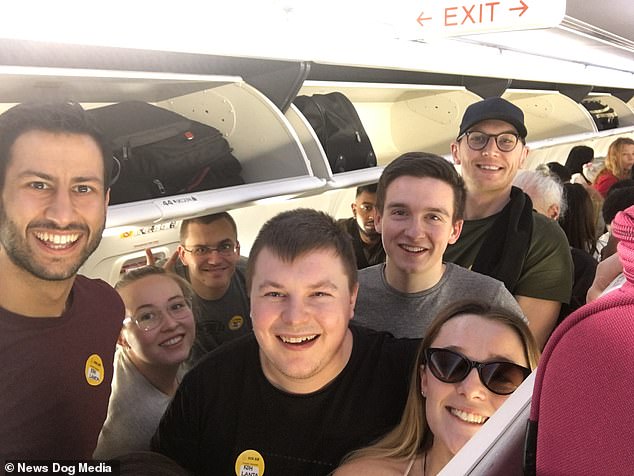 Mr Bandar, left, said the employees, pictured on a flight to Thailand last year, have grown closer thanks to the holidays

‘But we actually found that people who took less holiday as a result of this unlimited paid leave.

‘Other employees who have a limited annual leave allowance will usually work out how much holiday they have remaining and make sure they take all of it.

‘So now we actually make sure everyone in Team Turn takes at least their minimum holiday allowance which is 28 days.

‘No-one in the company has taken advantage of the unlimited paid leave benefit out of respect for each other and the business. People treat it with responsibility and appreciation.’