Home » World News » Boy, 8, dies in his bunk bed after breaking his skull in bike accident 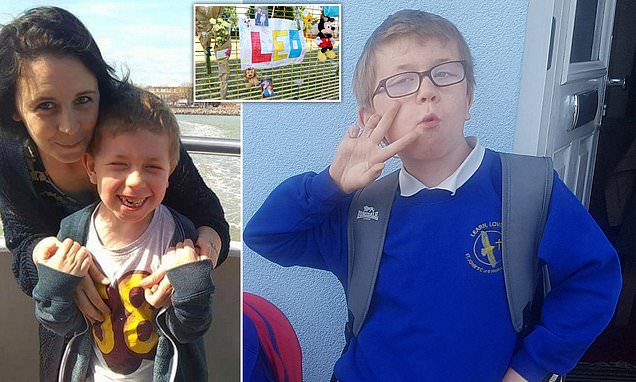 Boy, 8, dies in his bunk bed after breaking his skull in bike accident

Boy, eight, dies in his bunk bed after breaking his skull when he fell off his bike while riding without a helmet for the first time 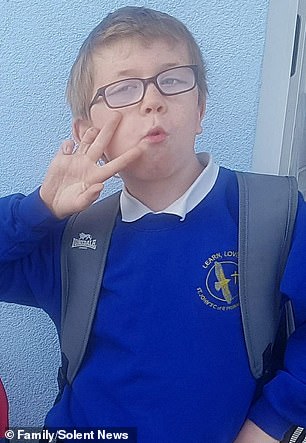 An eight-year-old boy died after fracturing his skull when he fell off his bicycle – having gone out to play on it without a helmet for the first time.

Leo Burton was performing ‘figures of eight’ with his older sister on their bikes when he came off and smacked his head on the concrete ground in Gosport, Hampshire, an inquest heard.

The boy, who was one of five siblings, cried and told his mother his ‘head hurt’ – but had no cuts or bruises and showed no unusual signs before he was put to bed after dinner like normal.

However, Leo had fractured his skull and suffered bleeding on the brain before passing away in his bunk-bed, where he was discovered by his devastated father in the morning.

Thomas Burton, a landscape gardener, went to check on his son when Leo didn’t wake at 6am like he did every day.  Tragically, Mr Burton discovered Leo ‘purplish’ in colour and ‘bubbling at the mouth’. 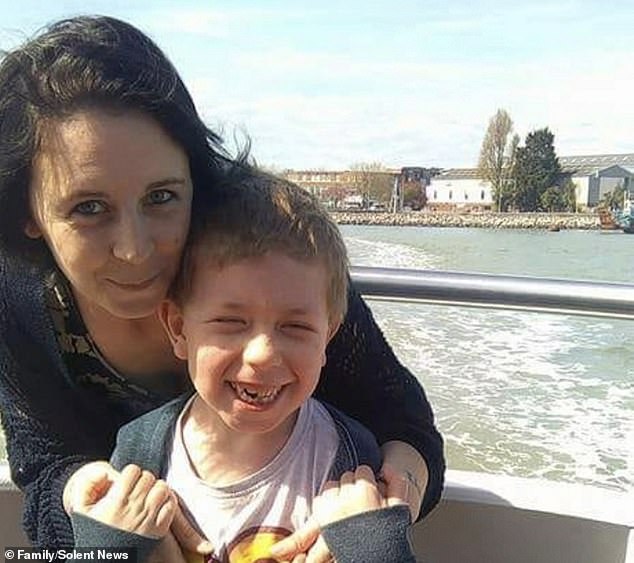 Natalie Dennis said her son Leo (together, above) went cycling without a helmet ‘for the first time’. Paying tribute to him, she said he was ‘clumsy’ but good on his bike

Doctors told the inquest that if Leo’s parents had taken him to hospital after the fall, he would have been sent back home as per NHS head injury guidelines – and his parents would have been told to ‘keep an eye on him’ with ‘Calpol’.

Coroner Samantha Marsh today highlighted the ‘importance’ of helmets on children after Leo’s mother Natalie Dennis said he went cycling without one ‘for the first time’.

Mrs Marsh said: ‘We need to highlight just how important it is to wear helmets.

‘If we can have one positive thing coming out of this it’s that children should wear their cycle helmets, they are important especially at this time of year when families should be together.’

Portsmouth Coroner’s Court heard that in the afternoon of June 23 this year, Leo was out playing ‘around the block’ with sister Courtney by their home in Gosport.

Detective Sergeant Anthony Churcher-Brown, of Hampshire Constabulary, said Courtney told police she and her brother were doing ‘figures of eight’ on their bicycles when he fell off his blue bike and hit his head on concrete. 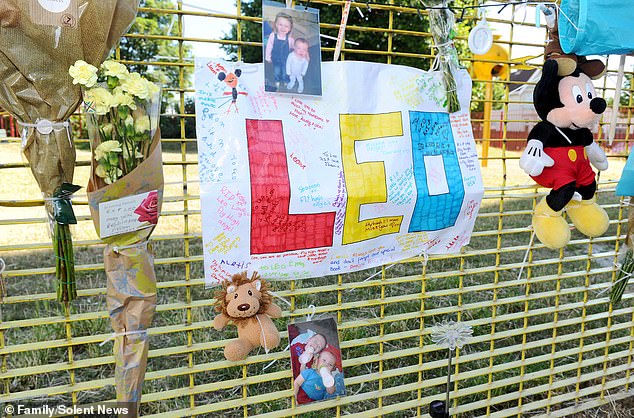 Detective Sergeant Churcher-Brown added: ‘Natalie was in the kitchen with Thomas when one of Leo’s siblings came and told them he fell off his bike and hit his head.

‘Leo was crying but walking and talking, he said his head hurt and Natalie checked it but there were not cuts or bruises.

‘At the time of the incident Leo was not wearing a helmet. He later got upset as he didn’t want dinner and afterwards went upstairs and vomited in the toilet.

‘There was only a small amount of vomit in the toilet and him being sick was put down to the fact he didn’t want to eat his dinner.’

The hearing heard it was not unusual for Leo to not want to eat after hurting himself because he suffered from an underactive thyroid gland.

He was put to bed just after 7.30pm and his parents checked on him just before 10pm when he was still alive.

DS Churcher-Brown continued: ‘At 6.50am Thomas woke up and had a cigarette which woke Natalie. Leo was usually awake by 6am so Thomas went to check on him. 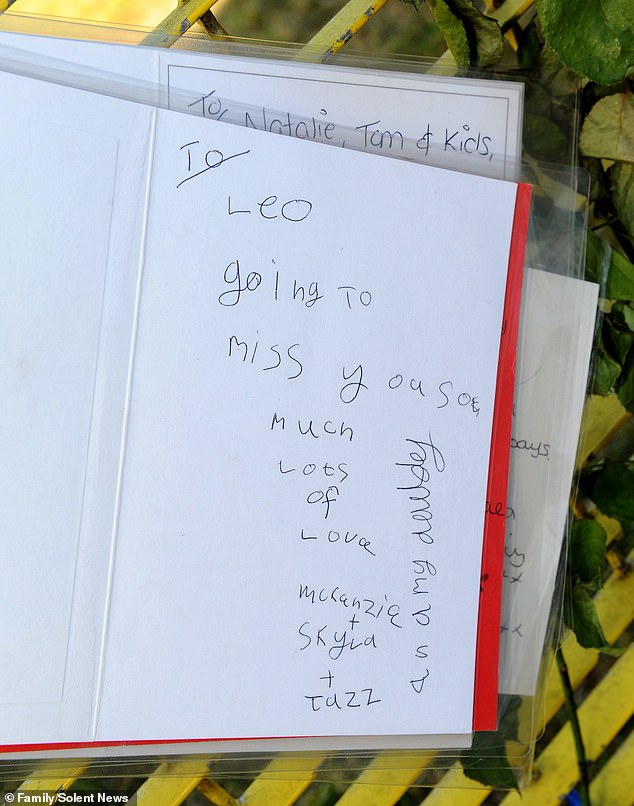 ‘Leo was in the foetal position and when Thomas turned him over he noticed he was a purplish colour and was bubbling at the mouth.

‘Thomas shouted for Natalie and tried to perform CPR as an ambulance was called.’

Paramedics arrived at 7.08am and Leo was rushed to Queen Alexandra Hospital in Portsmouth – but he was pronounced dead at 8.45am.

Experts told the hearing he suffered a small bleed on the brain and would have likely died in his sleep ‘without discomfort’ hours before he was taken to hospital.

Dr Amy Andrew said: ‘He was in rigor and had likely been in cardiac arrest for a significant amount of time.

‘A team discussion concluded more resuscitation attempts were not in Leo’s best interest as he has likely died hours before coming in the hospital.

‘He suffered a fractured skull with bleeding between the skull and the brain, there was a small brain haemorrhage at the brain stem. The blood had nowhere to go apart from down into the area that controls our life support.’

Dr Andrew said if Leo was seen immediately by doctors they may have been able to remove the blood from his brain. 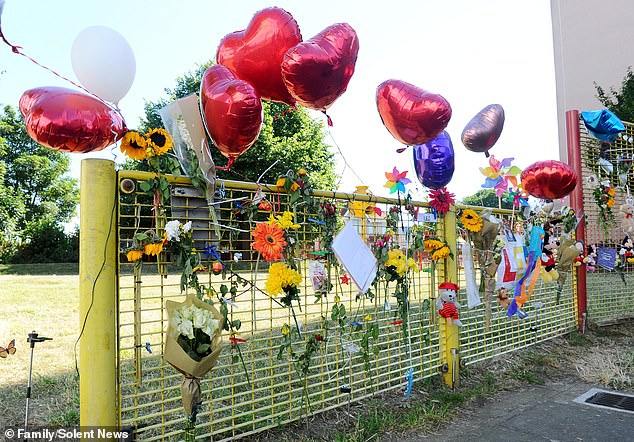 However, Dr Andrew said: ‘If he was sent to us on the day we would have sent him home as per the head injury guidelines.’

Pathologist Dr Samantha Holden said Leo showed no signs of being gravely ill as he was in a state known as ‘lucid interval’.

‘By taking him to hospital it might not have changed anything, his parents would have been told to keep an eye on him, give him Calpol and give him TLC.

‘It was simply too late for Leo by the time he got to hospital. It’s one of those unfortunately tragic deaths. No parent should have to bury their kid..’

Ms Dennis, paying tribute to her son, said he was ‘clumsy’ but good on his bike.

She said: ‘He was just generally clumsy, he would trip over his feet but was very much like a daredevil and this was the first time he didn’t wear his helmet.

‘He was generally good on his bike, though. He was a funny and loved kid, he always kept his younger brothers in check. He had a heart of gold and now after he’s gone we realise how many people loved him. He was one of a kind.’

How old is Alex Jones, when did the One Show host marry, who's her husband and do they have any children?