Boy, 16, is found guilty of stabbing to death promising footballer, 15

Boy, 16, is found guilty of stabbing to death promising footballer, 15, with a ten-inch Rambo blade on a bus after ‘trivial’ argument

A teenager was yesterday found guilty of murdering a 15-year-old boy after knifing him on a bus over a ‘trivial’ row on Snapchat.

The 16-year-old stabbed promising footballer Baptista Adjei twice in the chest with a hunting knife with a ten-inch blade in front of a group of terrified schoolchildren.

A second boy, also 16, was found not guilty over his involvement.

The killer was captured on CCTV dancing after a friend phoned him to say his victim had died. 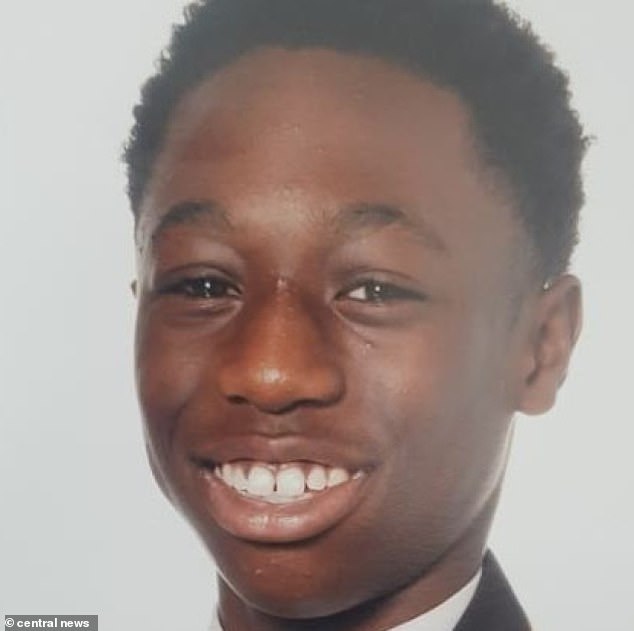 He had become enraged when Baptista called him a ‘midget’ on Snapchat, the instant messaging app, two weeks before the fatal attack. He told an Old Bailey jury: ‘I didn’t really feel anything [about the attack].’

Yesterday Baptista’s grieving mother Josephine said she could not understand how he had lost his life over something so trivial.

She asked: ‘Why do the children do things like this? They start an argument on Snapchat and then they think it’s normal to stab your rival, to kill another person.

‘I live my life for Baptista and his younger brother and now my boy is gone, for nothing. This loss follows me everywhere I go now.’

Mrs Adjei told the Daily Mail she was in the process of moving away from Stratford, east London, because she is ‘too upset, too shaken to live here any more’.

The court heard that the acquitted teenager had alerted the killer after spotting Baptista and his friends on a bus to Stratford on October 10 last year.

When the bus pulled up, the killer, who wore a blue latex glove and pulled on a balaclava, boarded and knifed his rival twice in the chest with the Rambo knife, puncturing his lung and heart.

Baptista, who had trials coming up for League One side Ipswich Town before his death, staggered from the bus but collapsed on the ground outside a McDonald’s restaurant, where he died in a pool of blood still wearing the uniform of Roman Catholic boys’ school St Bonaventure’s in Forest Gate, east London. Another schoolboy was stabbed in the arm and leg but survived. He told police the attack had followed some inter-school threats over Snapchat a few weeks earlier ahead of a football match.

One of the defendants had sent Baptista a message saying: ‘If you’ve got no bodies on your blade, leave the group chat.’

Baptista replied: ‘Shut up. You’ll be the first.’

Deanna Heer, prosecuting, said it was ‘almost unthinkable’ that the boys would arm themselves with hunting knives over ‘something so trivial’.

‘They armed themselves with those knives to go hunting Baptista and [his friend],’ she said. ‘This was not a spontaneous attack.’

The killer had admitted manslaughter and the unlawful wounding of the other boy but denied murder and wounding with intent, claiming he only took the knife to scare his victims.

He was cleared of wounding with intent.

His family had confronted him after hearing rumours of the attack and he was taken to Forest Gate police station by his mother.

The second defendant denied tipping off the killer, telling jurors he had no idea the other teenager would attack his rivals. He was found not guilty of murder and unlawful wounding.

Neither youth can be named for legal reasons. The killer will be sentenced on September 25.

‘Terror crocodiles’ the size of buses with ‘teeth as big as bananas’ once preyed on dinosaurs, scientists reveal