Boris Johnson today declared ‘the price of freedom is worth paying’ as he compared defeating Russia in Ukraine to beating the Nazis in the Second World War.

The Prime Minister, attending the G7 summit in Germany, said victory over Hitler was ‘very expensive’ but delivered ‘long-term stability’ as he joined other leaders in pledging to support Kyiv for ‘as long as it takes’.

Mr Johnson made the remarks after world leaders pledged to set a price cap on Russian oil and impose trade tariffs to make Putin pay for his invasion, which is now dragging into its fifth month.

President Volodymyr Zelensky also addressed the closed-doors meeting, in which he is thought to have told leaders that he will keep fighting for as long as it take to force Russia to negotiate a peace deal in Kyiv’s favour. 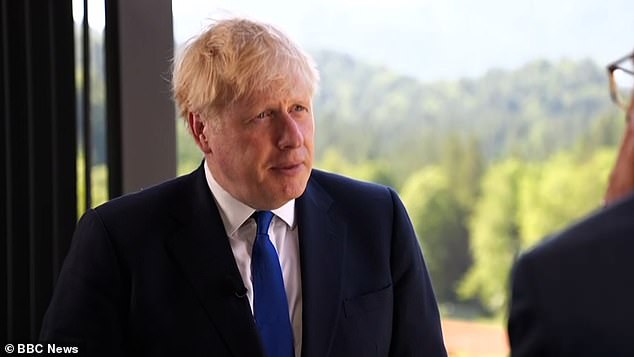 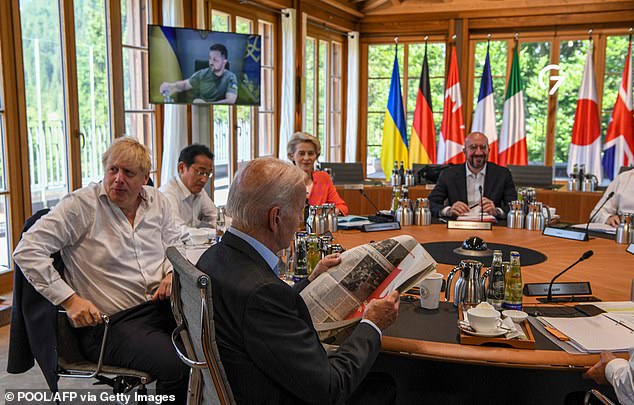 Mr Johnson spoke following a G7 summit in Germany which was addressed by President Zelensky (pictured), who voiced concerns his allies are becoming ‘fatigued’

Speaking to the BBC after the meeting, Mr Johnson was challenged on the rising cost of supporting Ukraine at a time when inflation is running rampant and public finances are being squeezed.

He replied: ‘The point I would make to people is… that sometimes the price of freedom is worth paying.

‘It took the democracies in the middle of the last century a long time to recognise that they had to resist tyranny and aggression.

‘It took them a long time, it was very expensive, but what it bought in the end, with the defeat of the of the dictators, particularly of Nazi Germany, [was] decades and decades of stability [and] a world order that relied on a rules-based system.

Allowing Russia to win in Ukraine, he argued, would produce ‘long-term instability’ and ‘anxiety across the world’ that would ultimately prove more costly.

Also at the meeting, the US pledged to send advanced air defences to Ukraine which can fire further than its current systems and hit incoming missiles.

US national security adviser Jake Sullivan said Zelensky had specifically requested the systems, along with further financial support to prop up his economy.

Zelensky also briefed the G-7 leaders on how his administration is using the assistance he’s received to date ‘to maximize Ukraine’s capacity both to resist Russian advances, and to pursue counter attacks where possible.’

Sullivan added that the Ukrainian leader was ‘very much focused on trying to ensure that Ukraine is in as advantageous a position on the battlefield as possible’ in coming months because ‘he believes that a grinding conflict is not in the interest of the Ukrainian people.’

Zelensky also told the leaders that he needs to be in stronger position before engaging in peace talks with Russia, according to a senior French diplomat, who spoke under condition of anonymity.

After hearing from Zelenskyy, the leaders pledged in a statement to support Ukraine ‘for as long as it takes,’ saying it is up to Ukraine to decide on a future peace deal.

Leaders were also finalizing the deal to seek a price cap during their three-day G-7 summit in the German Alps.

G-7 finance ministers would resolve details of how a price cap would work, according to a senior US official.

Some analysts have doubts about how effective a price cap on Russian oil would be, as enforcement by the G-7 would likely depend on cooperation from India and China.

‘It is questionable whether countries like India and China will agree to cease purchasing Russian oil, especially as it is trading at a significant discount on the global market price,’ said Carsten Fritsch, a commodities analyst at Commerzbank.

The largest democratic economies will also commit to raising tariffs on Russian imports, with the U.S. announcing new tariffs on 570 categories of goods.

President Joe Biden is expected to soon announce the U.S. is purchasing NASAMS, a Norwegian-developed anti-aircraft system, to provide medium- to long-range defense for Ukraine.

NASAMS is the same system used by the U.S. to protect the sensitive airspace around the White House and U.S. Capitol in Washington.

Additional aid includes more ammunition for Ukrainian artillery, as well as counter-battery radars, to help counter the Russian assault in the Donbas, the person said. 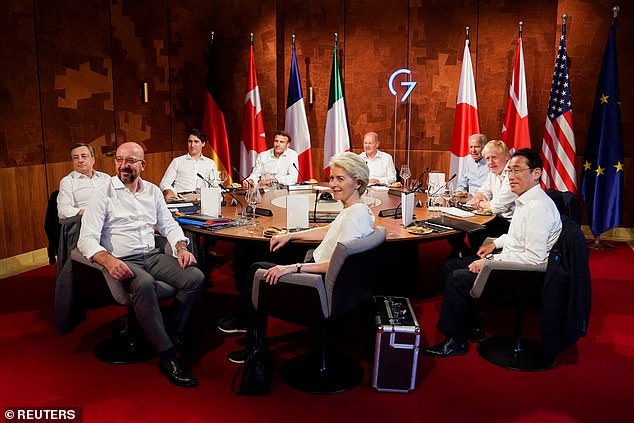 G7 leaders agreed to work towards fresh sanctions on the Russian economy, while the US pledged to send advanced anti-air systems to Ukraine

Biden is also announcing a $7.5 billion commitment to help Ukraine’s government meet its expenses, as part of a drawdown of the $40 billion military and economic aid package he signed into law last month.

German Chancellor Olaf Scholz, the G-7 summit host, said on Monday that ‘we are taking tough decisions, that we are also cautious, that we will help … Ukraine as much as possible but that we also avoid that there will be a big conflict between Russia and NATO.’

Mr Johnson added that under the circumstances the G-7 has to ‘continue to help the Ukrainians to rebuild their economy, to get their grain out, to export their grain, and, of course, we have to help them to protect themselves.’

In Brussels, NATO secretary general Jens Stoltenberg said Monday that the military alliance will increase the size of its rapid reaction forces nearly eightfold to 300,000 troops as part of its response to an ‘era of strategic competition.’

The NATO response force currently has about 40,000 soldiers which can deploy quickly when needed.

Stoltenberg made the remarks ahead of a NATO summit later this week in Madrid when the organization’s 30 allies are expected to also agree on further support for Ukraine in its war against Russia.

The G-7 already is committed to help finance Ukraine’s immediate needs and plans support to rebuild its economy long term.

A senior U.S. administration official said the U.S. and Europe are aligned in their aims for a negotiated end to the conflict, even if the nature of their outreach differs.

Scholz and French President Emmanuel Macron have held active conversations with Putin and Zelenskyy. The U.S. has largely cut off significant talks with Russia. 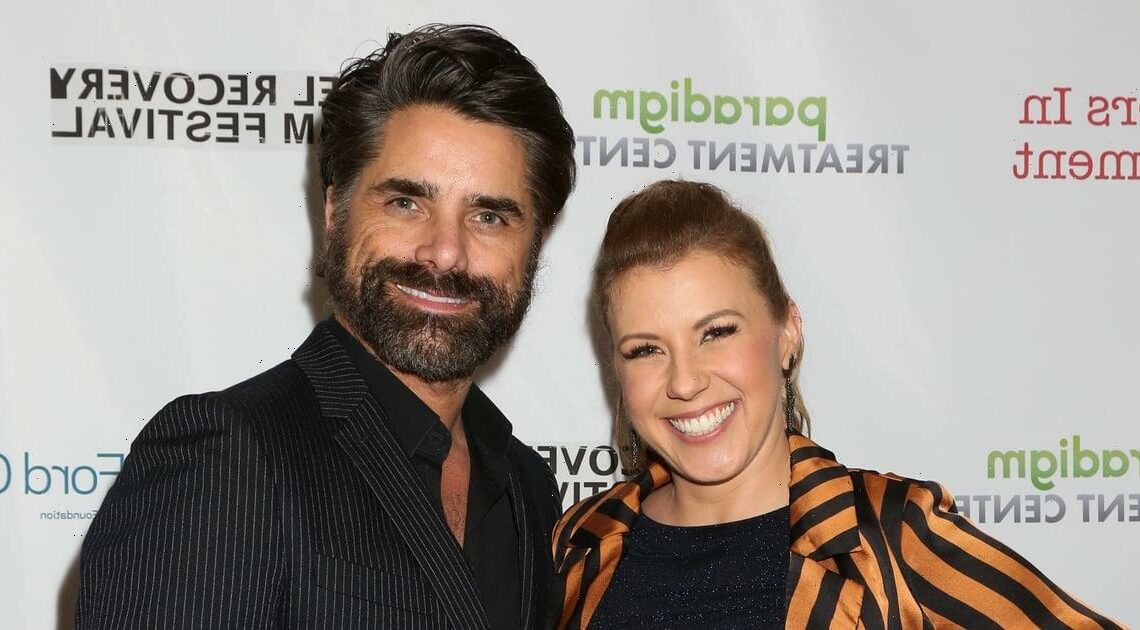