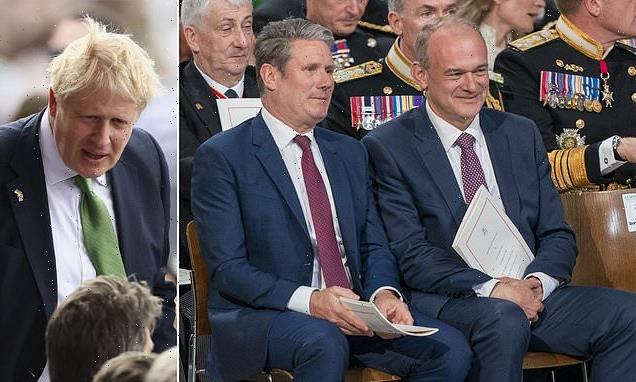 As the battleground is revealed for what could be the fight of Boris Johnson’s leadership, his allies have gone on the offensive against traitorous rebels trying to depose him.

Last night a Cabinet Minister accused Aaron Bell, an outspoken critic of the Prime Minister, of being a ‘turncoat’, insisting that it was only Mr Johnson’s campaigning that had got the little-known MP into the Commons in the first place.

In a sign of how febrile the atmosphere is as MPs return to the Commons this week after recess, No 10 accused Mr Bell of being a ‘rebel rouser’ who is pushing fellow MPs to submit letters of no-confidence while having ‘no alternative plan nor vision nor leader’.

They also accused him of breaking the ‘Jubilee truce’ announced by rebels by continuing to make calls to MPs during the bank holiday weekend. 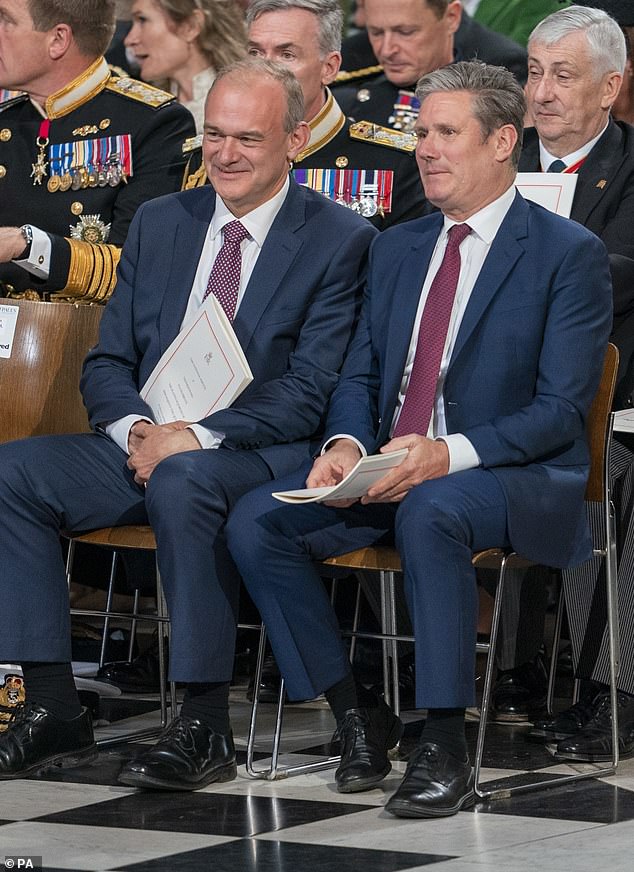 Senior Conservatives have claimed Tory rebels are doing the work of the opposition for them (Pictured: Ed Davey (left) and Keir Starmer (right)) 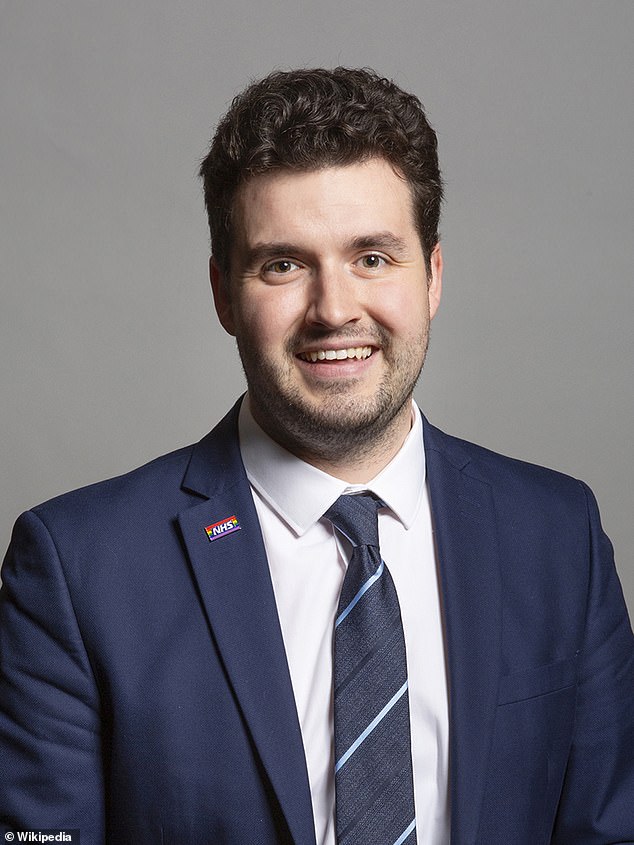 A source said: ‘It’s unseemly – it is meant to be a national celebration where we focus on the Queen.’

Another pro-Boris MP attacked Elliot Colburn, who won his Carshalton and Wallington seat from the Liberal Democrats in 2019 and has submitted a letter of no-confidence, saying Mr Colburn ‘wouldn’t be an MP if it wasn’t for Boris’. Former Tory leader Sir Iain Duncan Smith described the vote-strike tactics as ‘pathetic, childish’ behaviour.

Rebel MPs are convinced they have hit the threshold of 54 letters needed to trigger a vote of no-confidence, with some speculating the number may be as high as 67.

One problem for No 10 is the ‘scattergun’ rebellion appears to be uncoordinated and not led by well-known figures – and it is therefore harder to combat.

Last night a source close to the rebels confirmed Mr Bell was playing a key role as a figure who MPs considering putting in no-confidence letters have got in touch with for support. 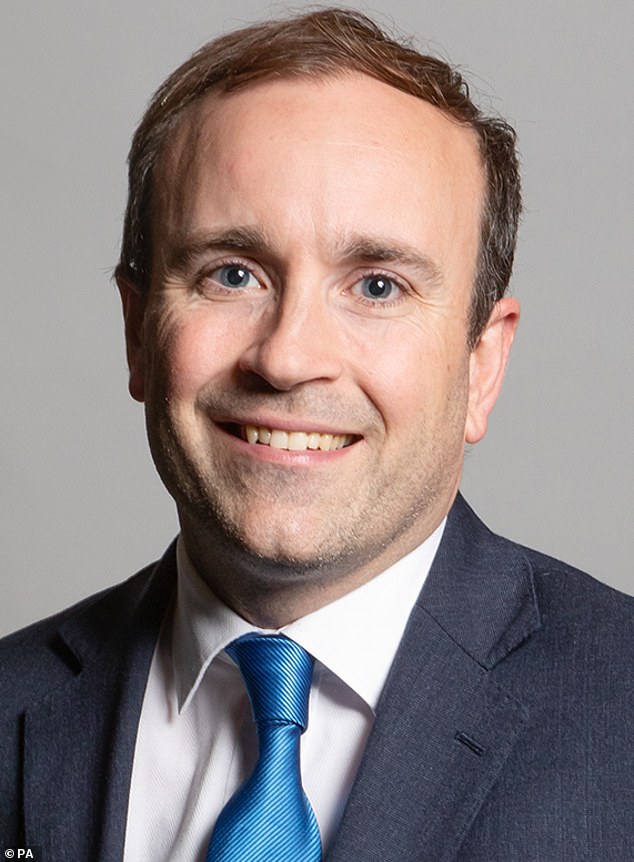 In February, the MP announced he had submitted a letter to the chairman of the 1922 Committee, Sir Graham Brady, after asking Mr Johnson in the Commons whether he had been a ‘fool’ for following lockdown rules at his grandmother’s scaled-back funeral in 2020.

Downing Street sources also pointed to Mr Bell’s acceptance of freebies from the gambling industry, which were first revealed by The Mail on Sunday last year. The MP, who previously worked for Bet365 and Ladbrokes, has accepted thousands of pounds worth of freebies from the industry over the past year.

Mr Bell, who is a vice-chairman of the All Party Parliamentary Group (APPG) on Betting and Gaming, has spoken out about the ‘risk’ of tougher regulation of the industry.

No 10 last night accused him of being ‘prepared to bet Britain’s future on a Conservative leadership election’ and being ‘reckless and self-indulgent’.

Mr Bell declined to comment, but friends of the MP denied he was at the centre of the plot to remove Mr Johnson.

They said Mr Bell had made no secret that he believed Mr Johnson had to go. But they added: ‘The idea that he owes his seat to Boris is b******s.

‘The biggest factors in 2019 were Corbyn and Brexit by a mile.’

Despite Downing Street’s hope that the report by top civil servant Sue Gray would draw a line under Partygate, there has been a drip-drip of MPs criticising the Prime Minister and revealing that they have sent a letter to Sir Graham.

Three ministerial aides, or Parliamentary Private Secretaries, are understood to have submitted letters, as well as a number of the 1922 Committee executive, who would not be allowed to say so in public.

One MP who has submitted a letter said they expected to get a call tomorrow confirming a no-confidence vote this week.

‘If it doesn’t happen this week, it won’t be until the Privileges Committee,’ the MP said, referring to the group of MPs holding an inquiry into whether Mr Johnson misled Parliament over Partygate.

One Boris ally said rebels may view a vote as ‘cathartic’ and a way ‘to give him a kicking’ after Partygate, but defiantly added: ‘Bring it on. He [Johnson] will win it.

‘They do not seem to have grasped the reality that there is no one better.’

She tweeted: ‘There were far, far more cheers, but that doesn’t make a good headline does it.’

But The Mail on Sunday can reveal that Tory leadership contenders have upped their talks with party donors, some of whom are unhappy with Mr Johnson’s leadership.

We have been told of two donors who have approached MPs who publicly criticised the PM and offered them support in the event that Downing Street threatens them with funding cuts.

Jeremy’s in the Hunt, but who else wants the Tory top job?

As the prospect of a no-confidence vote in Boris Johnson grows, so too does speculation about the possible contenders in a Tory leadership contest.

A name on many lips is Jeremy Hunt, beaten by Mr Johnson in the leadership race three years ago.

While the former Foreign Secretary has said now is not the time for a change of leader, he has not ruled out a return to the Cabinet or another tilt at the top job.

The Mail on Sunday revealed last week how Mr Johnson’s Cabinet allies feared supporters of Mr Hunt were mounting a secret pub plot to plan the toppling of the Prime Minister.

Other contenders include Tom Tugendhat, chairman of the Foreign Affairs Select Committee, and Trade Minister Penny Mordaunt, said to have the support of a number of rebels including Scottish Tories.

Those backing Ms Mordaunt believe she could be a ‘unity’ candidate, but she may not have sufficient support among Tory backbenchers to hold up a campaign.

Popular with grassroots Tories and having mounted a PR campaign that has drawn comparisons with Margaret Thatcher, Foreign Secretary Liz Truss has for some time been tipped as a future Tory leader.

Nadhim Zahawi, the Education Secretary praised for overseeing the delivery of the coronavirus vaccine, is also seen as a credible future candidate.