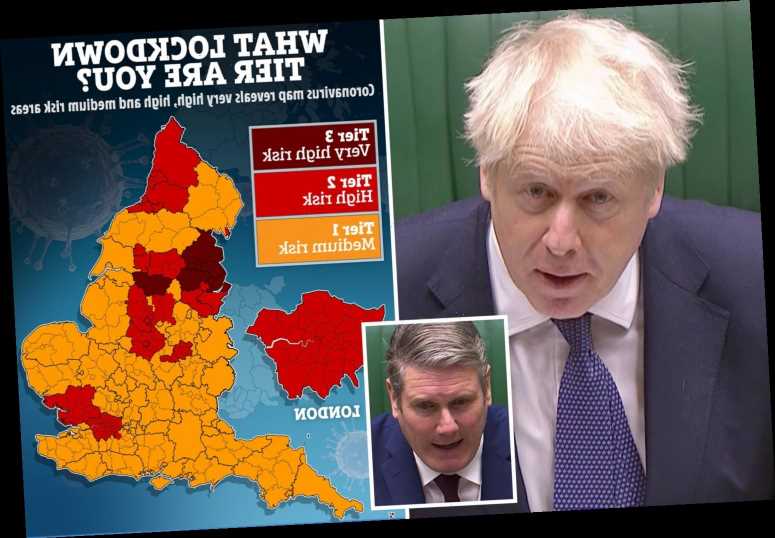 BORIS Johnson today accused Sir Keir Starmer of wanting to "turn the lights out" across the nation with a circuit breaker in a fiery PMQs session.

The PM blasted the Labour boss, who today demanded a two-week lockdown starting this Friday to tackle the rise in coronavirus cases across the country.

It came today as Nicola Sturgeon announced she would extend Scotland's circuit-breaker for another two weeks across the nation – meaning pubs will be shut and face extra curfews until November 2.

Boris is holding out against announcing a circuit-breaker which would would close facilities across the nation to try and get a hold on cases.

The Labour boss has demanded one starts on Friday – taking advantage of the half term break where schools will shut.

Boris raged at today's Commons clash: "He wants to turn the lights out with a full national lockdown! That was his policy last week anyway. Is that what he wants to do?"

But Sir Keir told him that his tiers system wasn't working as the top bracket has "no end" where areas cannot get out.

He claimed "the idea that some areas are immune" from the rise in cases is wrong and said only two areas hadn't seen rises above what Manchester was when it was put into extra measures more than three months ago.

People and businesses were facing "weeks and months of prolonged agony with no exit", he added.

"Half term this Friday may be he last opportunity to put in an effective circuit breaker," he warned.

England is standing alone in not having introduced a temporary shutdown of some businesses – after Wales, Northern Ireland and Scotland all introduced them.