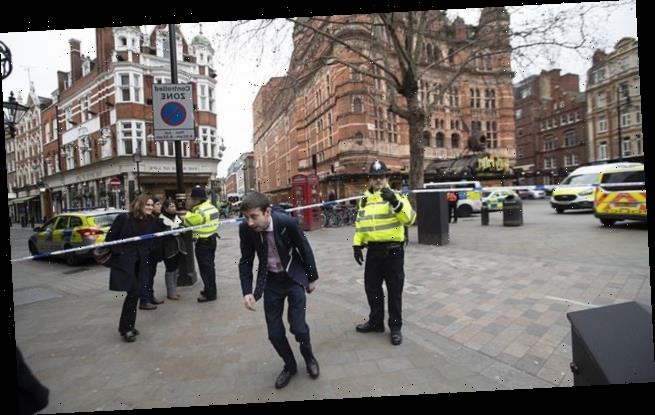 The bomb squad has put central London on lockdown for the second day running after another part of an unexploded WWII device was found in Soho.

Officers have evacuated four streets in the heart of the district and say that closures will most likely be enforced ‘until the end of this incident.”

The Met Police tweeted this afternoon: ‘Another part of yesterday’s WW2 ordnance has been discovered.

‘Further road closures are going to be implemented shortly. It is likely that the closures will be Dean St & the surrounding area however this will be updated as soon as we can.’ 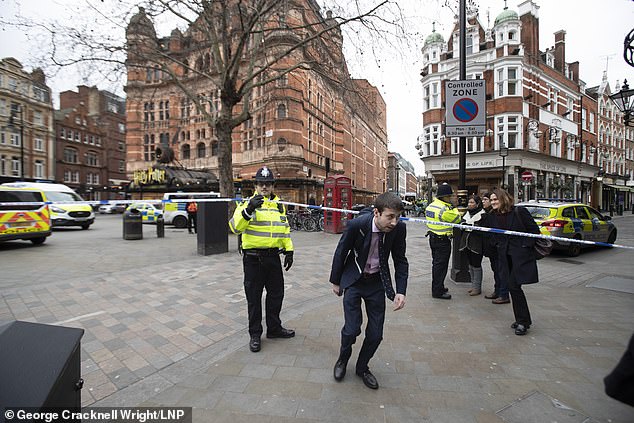 Pictured: Police in Soho, central London, today as they shut the area down for the second day running over a WWII device 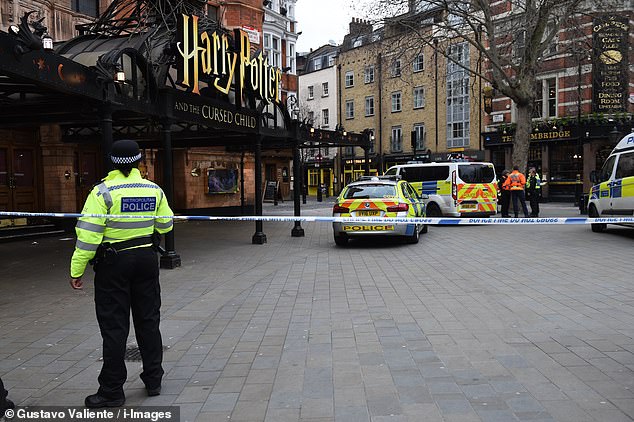 Officers are pictured in Soho, central London, this afternoon as they continue to deal with a WWII device that was found yesterday

It comes after the Met shut down streets in Soho yesterday after finding an unexploded ‘World War Two bomb’.

A Scotland Yard spokesman said: ‘Police were called at approximately 13:42hrs on Monday, 3 February to reports of a suspected WWII ordnance discovered at a building site near Dean Street, Soho.

‘All roads in between those mentioned are closing and evacuations will be taking place shortly.’ 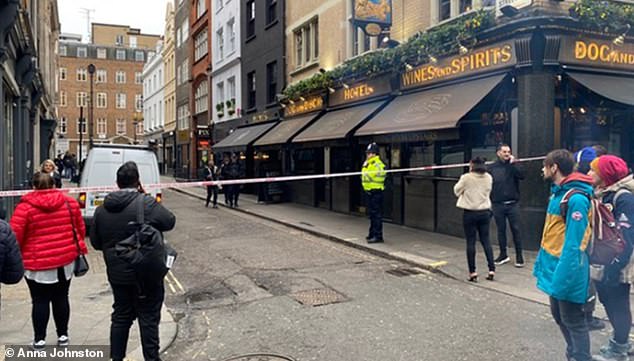 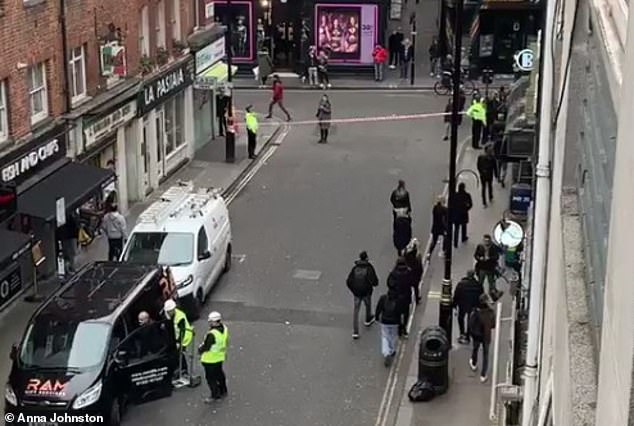 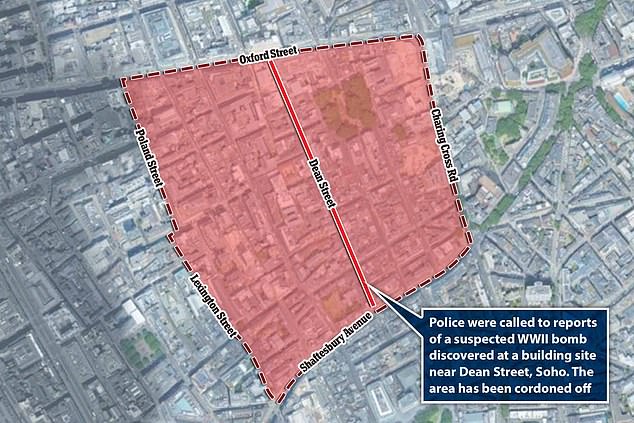 Pictured: The area in central London that police are now evacuating as they suspect an unexploded World War II bomb has been uncovered 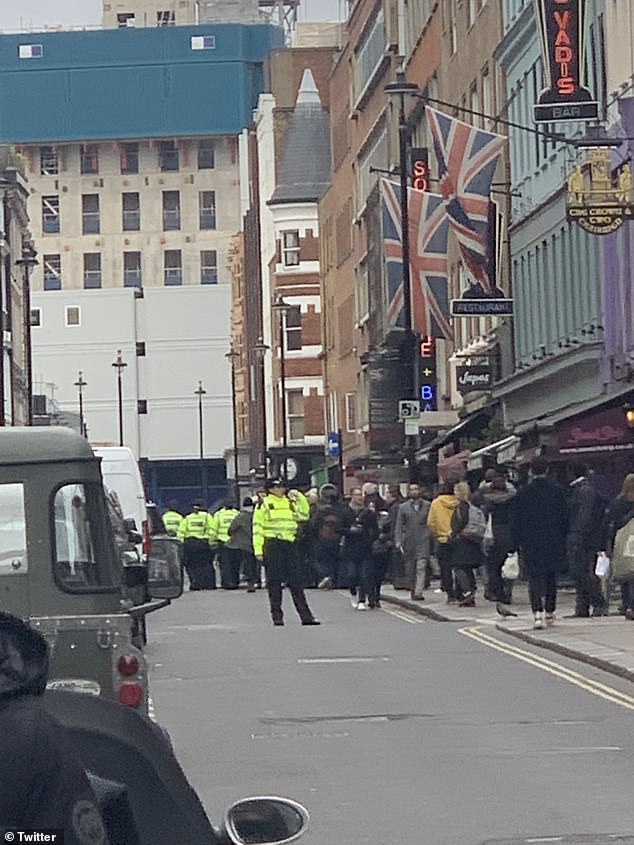 Police are pictured at the scene in Soho, central London, this afternoon where they suspect a World War II bomb has been found unexploded

Twitter user Anna Johnston filmed the scene from her office, writing above the video: ‘Average day at work. Unexploded bomb down my street #oldcomptonstreet #soho #evacuatethebuilding (except, we’re not. It’s been there for years, I’m sure we’ll be fine. Right?!).’

Another witness wrote on Twitter: ‘@MetPoliceUK are evacuating part of Dean Street in #Soho. They’ve told me there is a suspected unexploded bomb near the Soho Hotel.’

Footage from the scene showed police checking nearby buildings to make sure no one was still inside.

Pancho Lewis, Councillor for Mayfair, took to social media to urge anyone nearby to follow police advice. 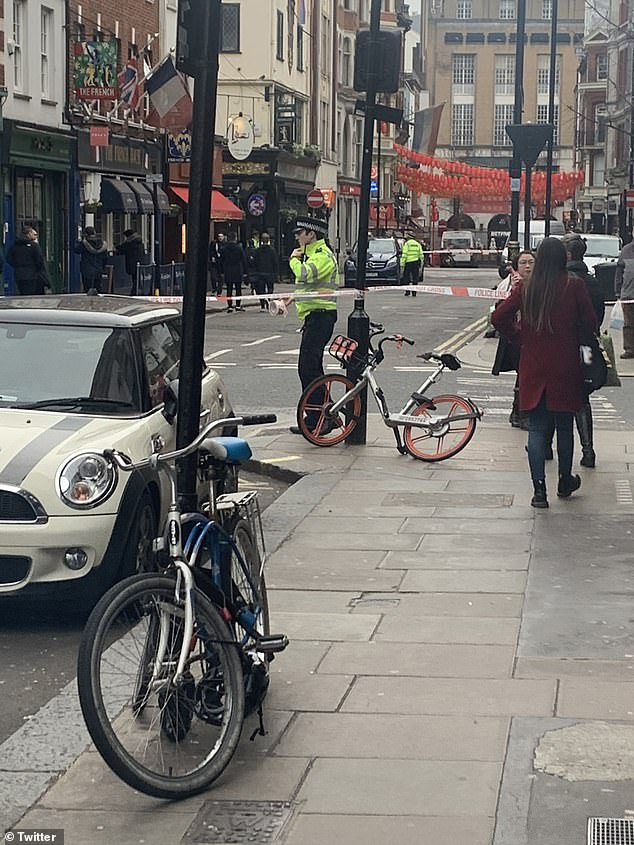 Pictured: Police at the scene in Soho as officers cordon off the area in central London amid a bomb scare

He wrote: ‘I haven’t had a briefing from an official source yet but it looks like @metpoliceuk are evacuating parts of Soho (includ. Dean St and Cambridge Circus). Everyone look after themselves and please follow police advice until further notice.’

Businesses told customers that they are being forced to shut up shop today while the operation unfolds. 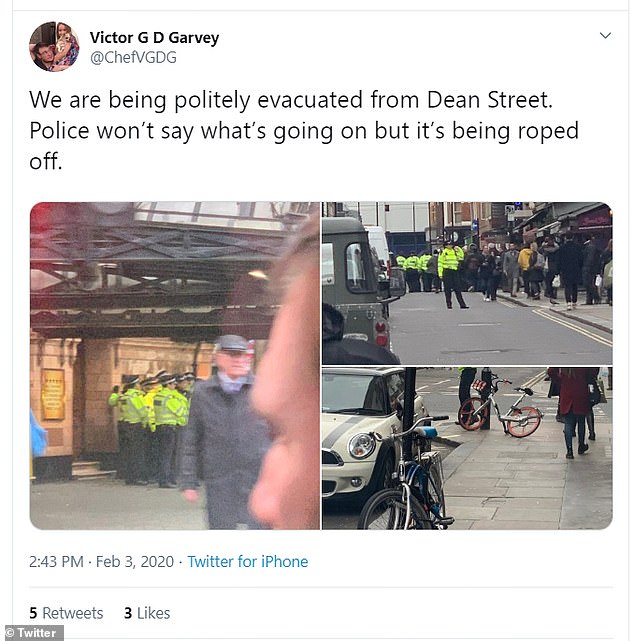 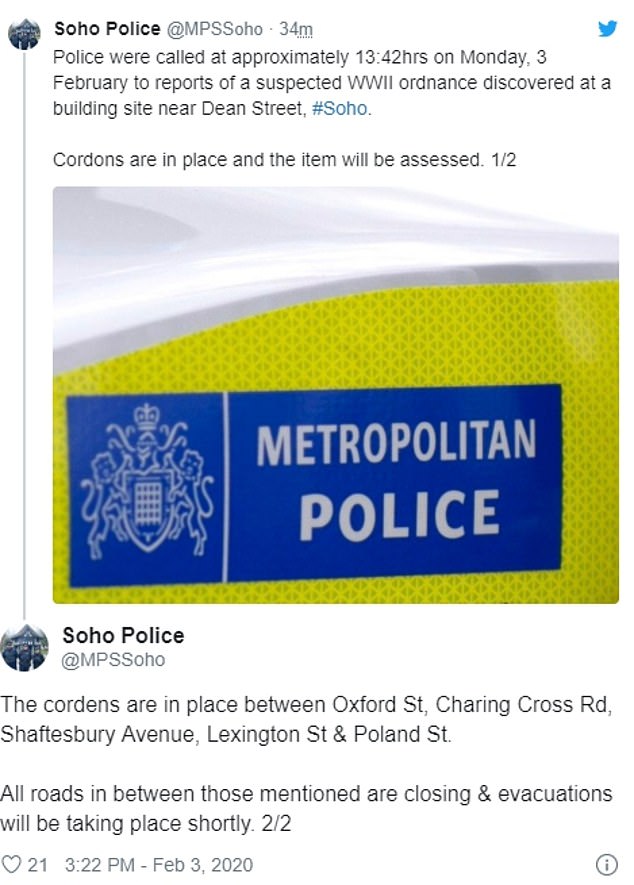 Dean Street’s Little Black Book tweeted: ‘Anyone trying to share news with LBB right now, the office has been evacuated along with half of Soho. Hoping to be back up and running in 1-2 hours.’

Clonezone Soho wrote: ‘We are closed for now guys, we re open once police tells us it’s safe.’

A Royal Engineers bomb disposal unit was called in to remove the half-tonne device.

A Ministry of Defence spokeswoman said: “An Army explosive ordnance disposal team has been called out to Soho to support the Metropolitan Police after discovery of a 500kg Second World War device.

“The Army EOD team have confirmed the bomb was safe to remove overnight to a location where it will be detonated.

“Military personnel are regularly required to assist with the disposal of historic ordnance such as this, ensuring every situation is dealt with as quickly as possible for the safety of the general public.”

Soho was battered with bombs during the Blitz of 1940-41 as the Nazis unleashed devastation on the capital.

The singer’s head was blown from his shoulders and dancers’ legs were sheered off in the horrific attack. At least 34 staff, guests and band members died that night.

Two bombs fell on St Anne’s Church between Wardour Street and Dean Street on September 24 1940 at around 11.38pm, burning most of it to the ground but leaving its tower intact.

It was hit for a second time on October 7 that year and Soho saw further bombing during the so-called Little Blitz of 1944.

Old Compton Street and Wardour Street were the sites of the bombings as the war neared its end.

And in 1999, homophobic terrorist David Copeland used a nail bomb to attack the Admiral Duncan pub in the district.

The iconic gay venue was the neo-Nazi’s third target in a two-week terror campaign across the capital.