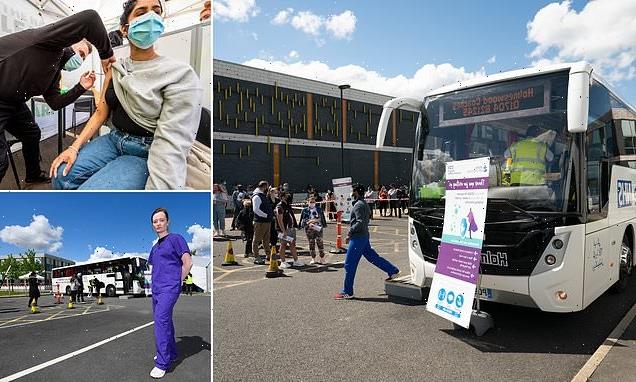 Bolton's vaccination bus could be our ticket to freedom

Bolton bus queue for a vaccine could be our ticket to freedom: The sense of community spirit as residents line up for their jab is impressive, writes ROBERT HARDMAN

They haven’t had a crowd like this all year here at Bolton Wanderers Football Club. It might only a be a few punters every few minutes but it’s several hundred every day and that’s more than the Trotters have enjoyed this season. There’s room for plenty more, too.

Because while Bolton might be leading the nation in cases of Covid-19 caused by the ‘Indian variant’, this town is also vaccinating the local population faster than you can say Nat Lofthouse.

If you want a Covid vaccination (it’s mainly the Pfizer jab hereabouts) and have some sort of reason, you are likely to get it. I meet 17-year-old Lauren who is not actually from Bolton but a student in Manchester. 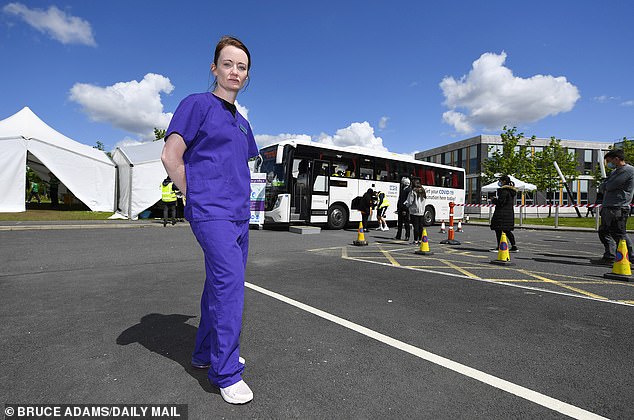 Dr Helen Wall, clinical lead at the Essa Academy vaccination centre, Bolton, is on the front line battling the surge in Covid-19 that has seen the infection rate shoot up to 301 people per 100,000 – the highest level since January

However, she explains that she occasionally works with nursery children and her mother was keen for her to have the jab. She only signed up online on Sunday night and here she is, 48 hours later, vaccinated. I meet Lucas, 23, who works at a local pizza factory. He only booked at the weekend and has been pleasantly surprised how quick it all was.

Whereas the football stadium vaccine centre still requires a booking, there are other places where you can simply turn up. I visit the main walk-in centre at the heart of Britain’s pre-eminent Covid postcode – BL3. Here, they have got vaccination down to a fine art.

The school car park has a team of 42 qualified vaccinators operating from three marquees, a row of ambulances and a bus which has been converted into a mobile inoculation unit. There is a modest queue but it is moving smoothly. Officially, the Joint Committee on Vaccination and Immunisation (JCVI) states that jabs are available to all those over the age of 36 plus over 16s who have a serious underlying health condition or work in certain frontline occupations. As with so much of the national messaging on Covid 19, however, the picture is rather different on the ground.

Here in BL3, I meet Thomas, a 23-year-old accountant from Blackburn, who is in good health but works in Bolton and ‘thought it would be the right thing to do’. He is soon cheerfully on his way with an armful of Pfizer. A few in the queue are key workers. Some, like 31-year-old Raja Khan, do not work at all. No doubt, some central planners in Whitehall will be angry that the rules are being stretched to the limits of their elasticity but one thing is abundantly clear. Whatever the reasons for Bolton’s surge in new cases, there really is, now, no excuse for not having the jab. And all those whom I meet in Bolton agree. Yet there are still enough unvaccinated Boltonians in this old Lancashire town – and in others like it – to cause grave concern to the Prime Minister and his advisers. Indeed, some are now urging him to revise the roadmap to liberation.

For the latest figures show that Bolton has nearly a thousand cases of the new variant – or 301 per 100,000. That is the highest number since January.

Hospitalisations are very low but until the authorities are sure how the new strain is spreading and how it reacts to the vaccine, then there will be pressure on the Government to delay next month’s proposed return to normality. Here in the car park of Bolton’s Essa Academy, the queue and the staff seem as diverse as Bolton itself. Despite reports across the UK that minority groups can be disproportionately reluctant to seek jabs, that would certainly not appear to be the case here.

Those waiting outside the school pass a trestle table with a sign inviting everyone to help themselves to a free cup of tea and a biscuit. It is a delightful, public-spirited gesture by Rashid Patel, a shopkeeper (and one time Test cricketer for India) and his wife, Zebun. 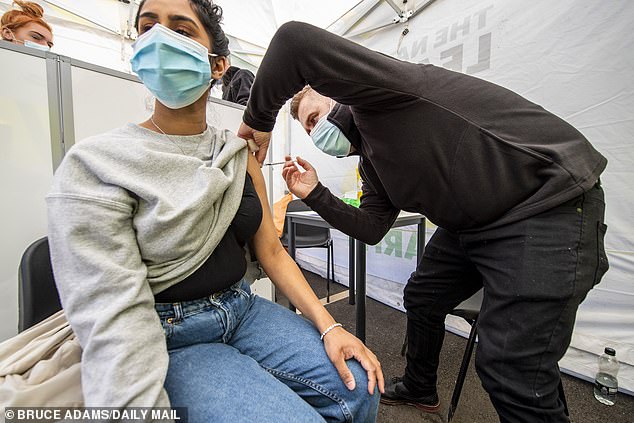 Two of their four children work in the NHS, Zebun tells me, and it just seemed like a neighbourly thing to do.

The sense of community spirit is impressive. Martin Knowles, the head teacher at the Essa Academy, is operating a full school of 1,100 pupils while a large part of the town is simultaneously trooping through his gates to get jabbed.

Stewards take basic information from queuers. Everyone is then checked by a clinician in a booth. I do not meet anyone who is turned away.

Post-jab, everyone must sit in a recovery tent for 15 minutes. ‘We have had one or two fainters – it can be a very anxious moment for some people – but so far no adverse reactions,’ says Dr Helen Wall of the NHS Bolton Clinical Commissioning Group, representing all 49 GP practices across town.

Now 38, she was born and bred here, knows Bolton backwards and says the data is so precise that she can go well beyond specific postcodes and narrow down specific streets where the new variant is on the rise.

For months, she has been working on new ways of improving vaccination rates and says there are several factors at work. One is the fact that 22 languages are spoken here.

‘We can’t get through to every media platform which may be influencing decisions,’ she says. 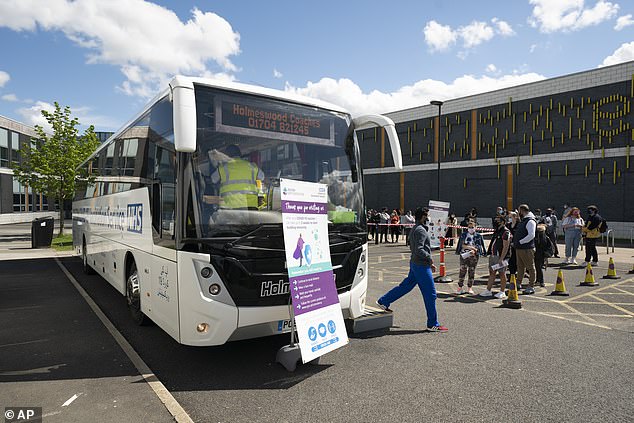 She says a more important factor is what she calls ‘barriers to access’. ‘Some people don’t have credit on their phone or they don’t want to get on public transport,’ she explains.

Hence, the vaccination bus which has been driving all over town and has already visited two mosques and an Asda car park before it came to this school. Trusted local figures have been crucial, she says, citing a Polish priest who very publicly had the jab and was swiftly followed by most of his flock.

I ask her what her policy is on vaccinating under-36s and she says her team must adhere to the JCVI guidelines, but adds ‘what I would say to everyone is turn up and have a conversation and we will see how eligible you are’. She says it has been ‘uplifting’ to see the number of elderly people here in recent days. ‘They would have been eligible some time ago,’ she says.

Some parts of Bolton have seen vaccine take-up well in excess of the regional average – as high as 93 per cent. But as a rule, says Dr Wall, hesitancy increases as age decreases. Since pushing the jabs programme into the local community, the results have been very encouraging with the worst-case cohorts – as low as 60 per cent back in March – now approaching 80 per cent. It’s clear that some clinicians here are keener to get people jabbed than turn them away. I meet Joel Burke, 23, and three colleagues, all in their twenties and all field engineers for a local machinery company, who have turned up on spec and all get vaccinated.

A new walk-in vaccination centre has just opened a few miles away in a community centre. Here I meet taxi driver, Humayun Mushtaq, 22, and two colleagues, also in in their twenties, emerging freshly-jabbed. They say they don’t know of anyone who doesn’t want it. No one is turned back while I am there. No one is entirely sure why Bolton has seen such a surge in the Indian variant. Yes, it has a sizeable population with Indian and Pakistani heritage (a fifth of Boltonians are BAME), and some may recently have returned from the region. But the figures are much the same – or higher – in other areas.

‘I don’t know why it’s us. I knew one or two people at the mosque who refused the jab in the early days but they caught Covid and died. Everyone I know has the vaccine now,’ says Abdul Raoof Raja, 69, a retired driving instructor. ‘I just hope that they don’t try to hit us with a local lockdown.’ Dr Wall points out that when Covid rates started to rise in Bolton last September, the rest of the North West came next, followed by the rest of the country.

‘Once you have community transmission,’ she says, ‘it’s out there. And we have it now.’

We have been warned.