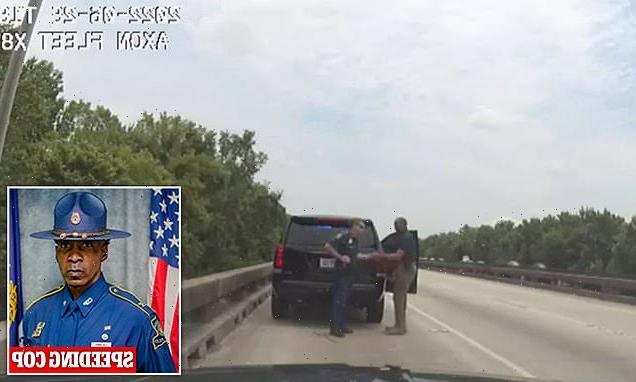 ‘Well I’ll be…!’ Louisiana Trooper’s shock as he pulls over his boss, before switching off bodycam, shaking his hand and letting him go

Police-worn body camera footage shows the moment a state trooper pulls over the head of the Louisiana State Police for speeding before turning off his camera and letting his boss go free.

On Thursday, the Louisiana State Police released the unnamed trooper’s body camera footage and a snippet of video from the trooper’s dashboard camera showing the trooper stopping Col. Lamar Davis on June 28 just before 1pm.

In the video, obtained by WAFB, the trooper is seen pulling an unmarked black van over on the shoulder of the Atchafalaya Basin Bridge, and walking over to the car.

As soon as the trooper notices the driver is Davis, who steps out of the van, the driver says ‘Well I’ll be,’ in apparent surprise, just before the body camera footage cuts off.

The remainder of the encounter was caught on a dashcam on the trooper’s car, which showed the trooper shaking his boss’s hand, before letting him go.  That footage doesn’t have any audio, meaning it’s unclear what the two men said.

Capt. Nick Manale, the head of public affairs for the Louisiana State Police, said it appears the responding officer stopped his body camera recording as soon as he recognized Davis. 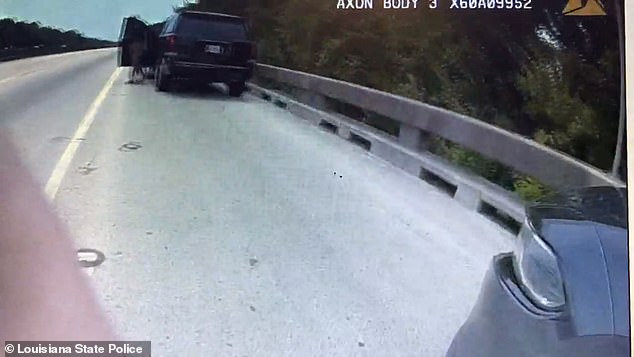 Body camera footage shows an unnamed trooper pull over a black van along the Atchafalaya Basin Bridge for speeding, but shuts off when the trooper recognizes the driver as the head of the Louisiana State Police 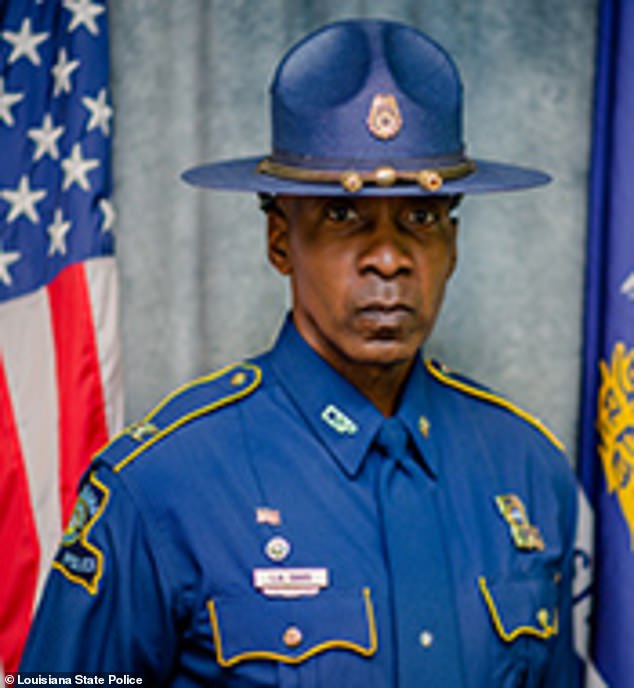 The driver was identified a Col. Lamar Davis, the superintendent of the Louisiana State Police Department (pictured)

But dash cam footage, which does not have audio, picks up the rest of the confrontation.

It shows the trooper walking over to Davis and talking to him for a few seconds between their two vehicles, before the two shake hands.

Within 30 seconds of him exiting his vehicle, Davis could be seen stepping back inside and preparing to drive off.

State Police say the officer did not make any notes about how fast Davis was driving in the 60mph zone on Atchafalaya Basin Bridge along Interstate-10, and Manale said the responding officer ‘utilized his discretion and did not issue a citation.’

An investigation into the confrontation is ongoing, and Assistant Attorney General Kristen Clarke, who oversees the Justice Department’s civil rights division, said Davis and Gov. John Bel Edwards have pledged to cooperate with authorities.

Davis has now said he accepts responsibility for speeding on the dangerous interstate – which has recorded more than 200 crashes each year for the past three years – but said he does not remember how fast he was driving.

He was headed to a meeting in Lake Charles when the trooper pulled him over, WAFB reports, and an unnamed source familiar with the matter told WBRZ he was ‘going at least 90mph.’

The source noted that the traffic stop came shortly after Davis gave his department an urgent assignment to stop speeding drivers on the bridge.

‘I was wrong. I admit that. I take full responsibility,’ Davis told WBRZ on Friday. ‘I try to do too much in a day.

‘I need to practice what I preach, and don’t want to put anyone in a position to stop me or any other troopers,’ Davis added. ‘I was wrong. There’s no excuse. I don’t believe in excuses.’

‘I know everybody wants to see everything that we do. But, we´re not putting body cameras on doctors or lawyers or anybody else that is interacting with the public,’ Davis said. ‘I ask that people trust that we are doing the right thing for the right reasons.’

Davis became superintendent of the Louisiana State Police on October 30, 2020. 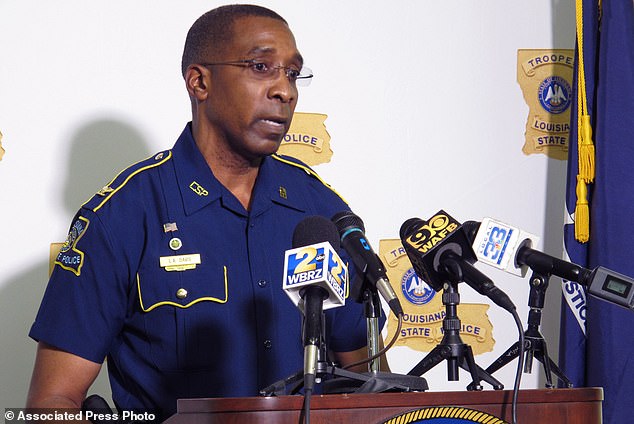 There have been over 200 crashes on the bridge (pictured) each year for the past three years, and Gov John Bel Edwards has recently signed legislation increasing fines for speeding on the bridge and adding speed cameras. It goes into effect next month

The confrontation came just one month before a new law goes into effect targeting speeding along the bridge.

The law calls for speeding fines along the stretch of the interstate to be doubled to $350 for a first offense and $1,000 for a second offense. It also calls for the addition of speed cameras.

Over the past three years, there have been hundreds of crashes involving speeding drivers along the bridge.

According to data obtained by WAFB, there were a total of 235 crashes on the bridge in 2019 – five of which were fatal.

Then in 2020, when fewer people were driving due to pandemic-related shutdowns, there were 206 crashes resulting in two deaths.

And by 2021, the total number of crashes jumped to 276 and resulted in two deaths.

Meanwhile, the United States Department of Justice announced last month that it was opening a civil rights investigation into the Louisiana State Police amid evidence that the agency has a pattern of looking the other way in the face of beatings of black men, including the deadly 2019 arrest of Ronald Greene.

The federal ‘pattern-or-practice’ probe followed an Associated Press investigation that found Greene’s arrest was among at least a dozen cases over the past decade in which state police troopers or their bosses ignored or concealed evidence of beatings, deflected blame and impeded efforts to root out misconduct.