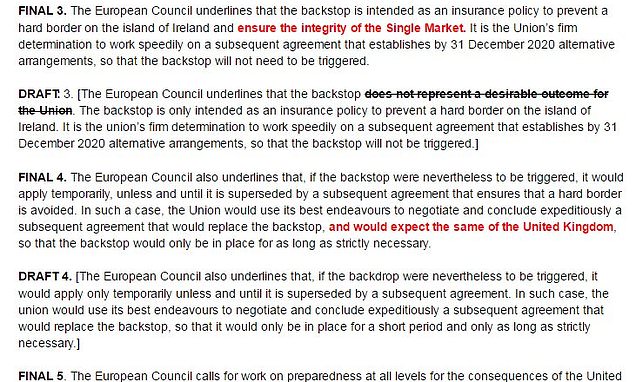 Body blow for May as the EU DELETES compromise passages

After the PM made a 10-minute plea for help, the other 27 leaders discussed what to do over dinner – after kicking her out to eat elsewhere.

Mrs May had asked for legal assurances the Irish border backstop would only be temporary, if it had to be used at all.

But the draft conclusions of the summit were then heavily edited, removing references saying the backstop was not a ‘desirable’ outcome and instead saying it was a crucial insurance policy to ‘ensure the integrity of the single market’.

The draft promised the EU would use its ‘best endeavours’ to get a final trade deal – but the final version added a clause saying Brussels would explicitly ‘expect the same of the United Kingdom’.

The changes mean the final version of the document is likely to be of little help to Mrs May as she fights to save her deal. 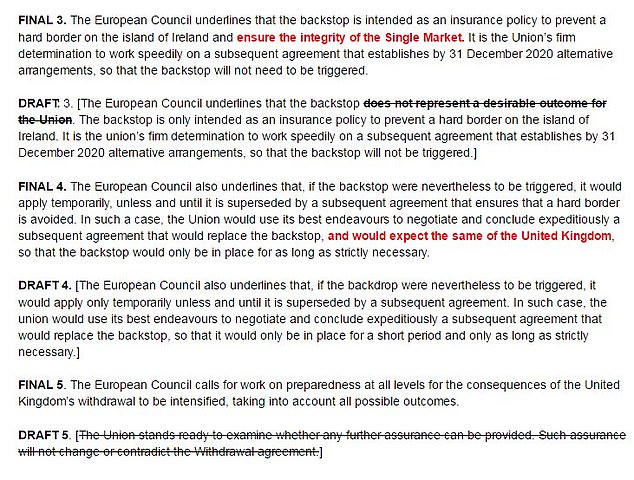 But the draft conclusions of the summit were then heavily edited (pictured), removing references saying the backstop was not a ‘desirable’ outcome and instead saying it was a crucial insurance policy to ‘ensure the integrity of the single market’ 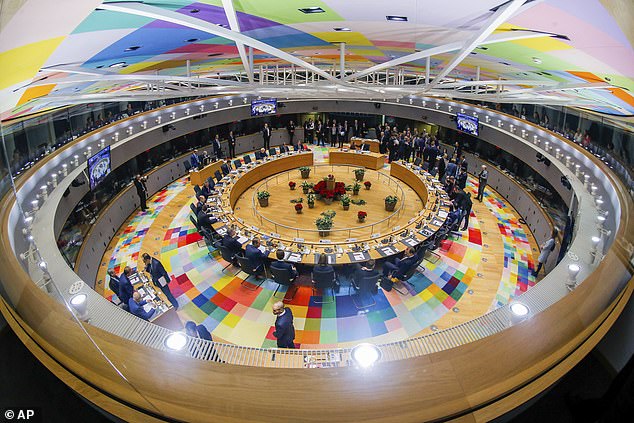 More than 100 Tory MPs have vowed to vote against any deal containing the backstop, which effectively leaves the UK bound to the EU customs union until a final trade deal can be agreed – a process which could take many years.

The DUP hate it because Northern Ireland must also follow many single market rules meaning there is a regulatory divide between the province and mainland Britain.

The EU has always insisted the backstop is necessary to ensure there is always an open border in Ireland despite the UK Brexit demand to leave the customs union and strike trade deals.

As her hopes of a breakthrough faded, Mrs May had an extraordinary confrontation with Jean-Claude Juncker today after EU leaders dismissed her plea for more Brexit concessions and he ridiculed her negotiating strategy. 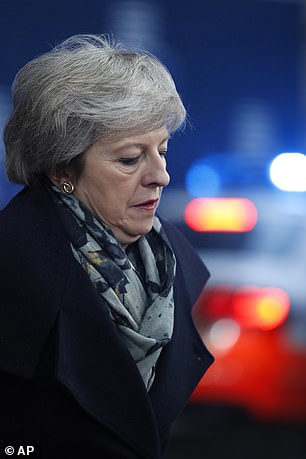 The PM – wielding her handbag – was seen locked in a tense standoff with the EU commission chief as the second day of the summit gets under way in Brussels.

Although the sound was switched off, TV cameras caught the pair exchanging what looked to be heated words for at least a minute.

The apparent clash, which will evoke memories of Margaret Thatcher’s ‘handbagging’ of EU leaders to secure Britain’s rebate in 1984, came after Mrs May’s latest appeal for ‘legally binding’ assurances over the Irish border backstop to save her Brexit deal fell flat.

France and Ireland are said to have be spearheading the resistance to more concessions at a stormy Brussels summit – even torpedoing calls for another gathering next month to try to thrash out a way forward.

The bloc has also pledged to ramp up preparations for the UK crashing out – with threats to charge British holidaymakers £6 to visit the continent if there is no deal.

But the EU’s stance provoked fury from Brexiteers, while DUP leader Arlene Foster insisted Mrs May must ‘stand up’ to her counterparts rather than ‘roll over as has happened previously’.