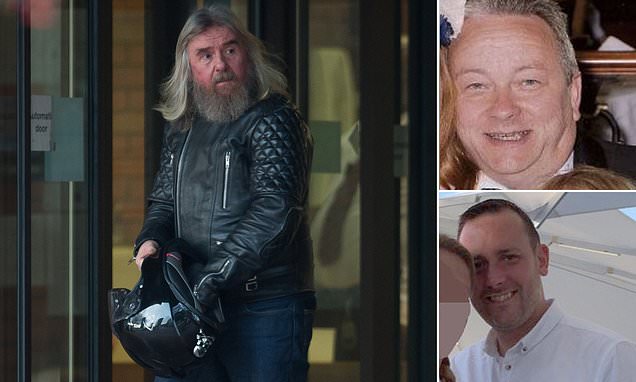 Bitter engineer, 59, sent a dead RABBIT to his ex-employer

Bitter engineer, 59, sent a dead RABBIT to his ex-employer and made Stephen Hawking jokes about his former boss’s disabled son when he was sacked after 32 years

A bitter engineer sent a dead rabbit in the post to his former workplace and made callous jokes about his ex-boss’s disabled son when he was sacked after 32 years in his job, a court has heard.

Derek Gwilliam, 59, waged a bitter hate campaign against company director Steve Rogers and his colleagues after he was fired for repeatedly bringing knives into work at the family run firm.

One sick message sent by Gwilliam to Mr Rodgers’s wife Theresa purported to be from the late Professor Stephen Hawking and mocked the couple’s son – who has Down syndrome – for requiring a wheelchair and calling him a ‘mong.’

The offensive post also linked a play on words about the stair lift company Stannah and the physicist’s death to use the phrase ‘Stannah stairway to heaven’.

The dead rabbit arrived at the offices of Trolex Engineering in Hazel Grove, near Stockport, apparently addressed to Mr Dawson’s newborn son.

Gwilliam also tagged himself in a Facebook group warning ex-workmates he planned to ‘f*** up the two p****s’ and sent pictures of a naked woman to Mrs Rogers plus offensive birthday cards. The letter mocking the couple’s son was initially treated as a hate crime. 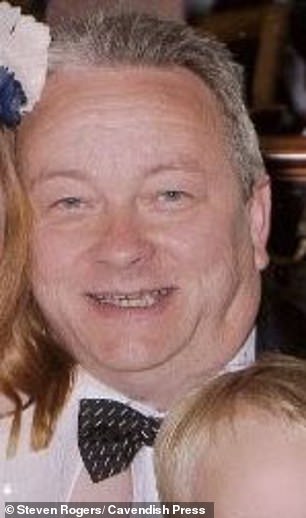 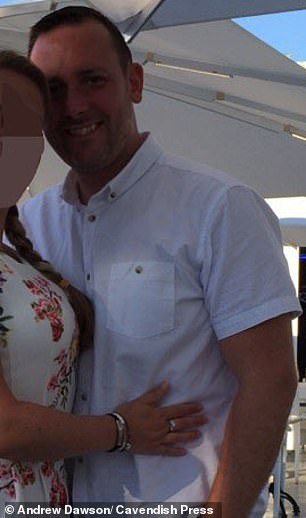 In a statement Mr Rogers, whose firm has successfully specialised in the design and manufacture of electro-mechanical machinery for 41 years, said: ‘We were sad to be letting go of Mr Gwilliam who had been working there for 32 years.

‘We didn’t want to terminate his employment, but we believe he became out of control. We just didn’t realise how distressing it would be to be contacted by him directly.

‘He was directing the hate crime towards my son and it was deeply distressing. There was also a picture of a naked woman which was received by my wife.

‘As a company we treat others with great respect and that is how we expect to be treated in return. This is a family run business. Since his dismissal, we had to involve legal proceedings. It has been detrimental to the business.

‘The comment about ‘mong’ referred to my son – it’s a despicable situation and it was a disgusting thing he did.’

Mr Dawson said: ‘He kept bringing knives into work and it was frightening for us. In relation to that we had no option but to suspend him and we made the decision to investigate him.

‘We thought it was over but then he kept sending Facebook messages and he said I was responsible for the company letting him go, and he said he was going to ‘f*** up the two p****s’ in revenge.

‘He continued to use abusive language towards us, and called me a ‘c***’. The abuse got worse, so much so that we had to call the police. We got legal action. 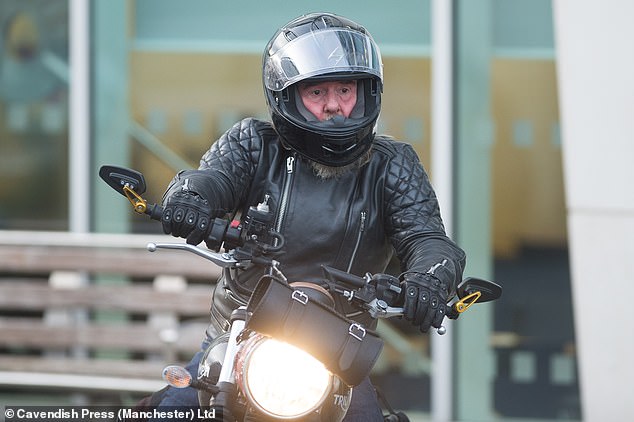 ‘It’s been detrimental to my company as well. It’s been personally upsetting and cause me a lot of concern, not just for my company, but also there were threats to me, threats to my wife and my newborn son.

‘I have been forced to up my security in my home address. I’m concerned to go to and from work, I believe Derek is watching me and checking up on me and my wife. He’s made direct threats towards me in the past.’

At Stockport Magistrates’ Court, Gwilliam admitted harassment and was banned from contacting the two directors and their families for two years.

Prosecutor Irene Rodgers said: ‘In March of this year, the company became aware that the defendant was bringing knives into the workplace. He was warned and a formal meeting took place where he ensured he wouldn’t do it again.

‘However he continued bringing the knives in and displaying erratic behaviour, so he was fired from the company a month later. Things then became more heated in the company when Mr Dawson felt like he was being watched and he even seemed to receive messages that suggested that somebody was watching him at his home and at his business.

‘Mr Dawson was also tagged on Facebook by Mr Gwilliam. He seemed to be hounding him and pursuing him. On August 10, a blue wrapped parcel was delivered by Royal Mail to the company. The postman said the parcel smelt very strange, and when they opened the parcel, they discovered a dead rotten rabbit.

‘Also in receipt of a letter was Teresa Rodgers, who was the secretary of the business and Mr Rodgers’ wife. She was sent a Facebook message that was upsetting and offensive towards her. 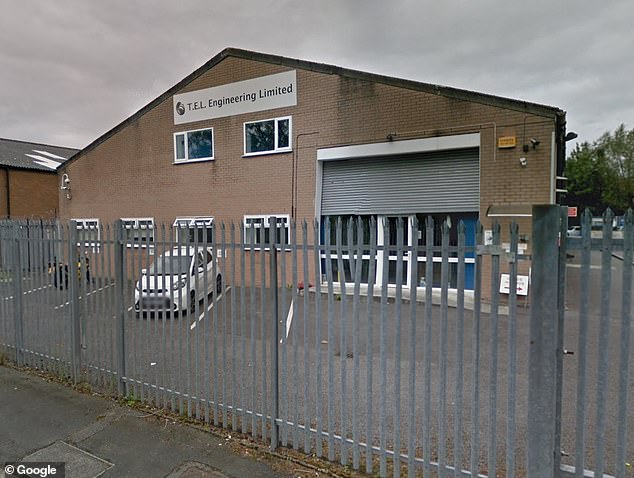 The dead rabbit arrived at the offices of Trolex Engineering (pictured) in Hazel Grove, near Stockport in Greater Manchester, apparently addressed to Mr Dawson’s newborn son

‘The first message referenced ‘Professor Stephen Hawking’ and his use of a stairway and it said: ‘Stannah stairway to heaven’. Her husband’s son had Down syndrome and did use a wheelchair and stairlift in their home, so she believed the message was directed towards their child, and dubbed the letter a hate crime.

‘Mr Gwilliams read the victim personal statements and had it explained to him and he said he could see it was upsetting, and that Mr Rogers was going through some personal familial issues at the time.

‘The offences were initially denied in interview however, he was shown CCTV of him putting the items in the post and was forced to admit it.

‘He admitted to sending the birthday card to the son and the dead rabbit after continuously saying to the police he hadn’t.’

Gwilliam, who has a previous conviction for harassment, said: ‘I never meant for this to go as far as it has, and for that I apologise. I’m the father of a disabled son who is no longer with us, and for that I have the utmost respect for them.

‘My father suffered a stroke two years ago and I have moved in with him to take care of him. I worked there for 30 years. Things were going wrong, my depression is getting worse. I am going to seek help for my depression. I know what I have done and I take it seriously. I put myself in this situation and I realise how serious it is.’

Gwilliam was sentenced to 12 weeks in jail suspended for two years and was also ordered to carry out 240 hours unpaid work and pay £200 in court costs.

Magistrates said: ‘This is serious enough to cross custody threshold but we are going to suspend that sentence. You need to put this behind you, enough is enough. You need to look after your health and that of your father.’ 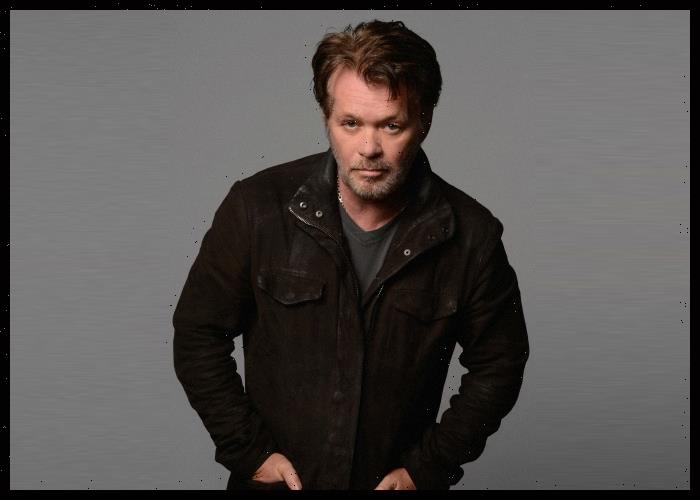 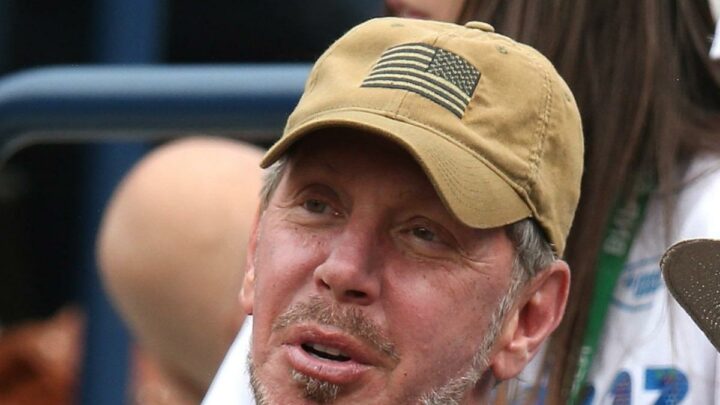