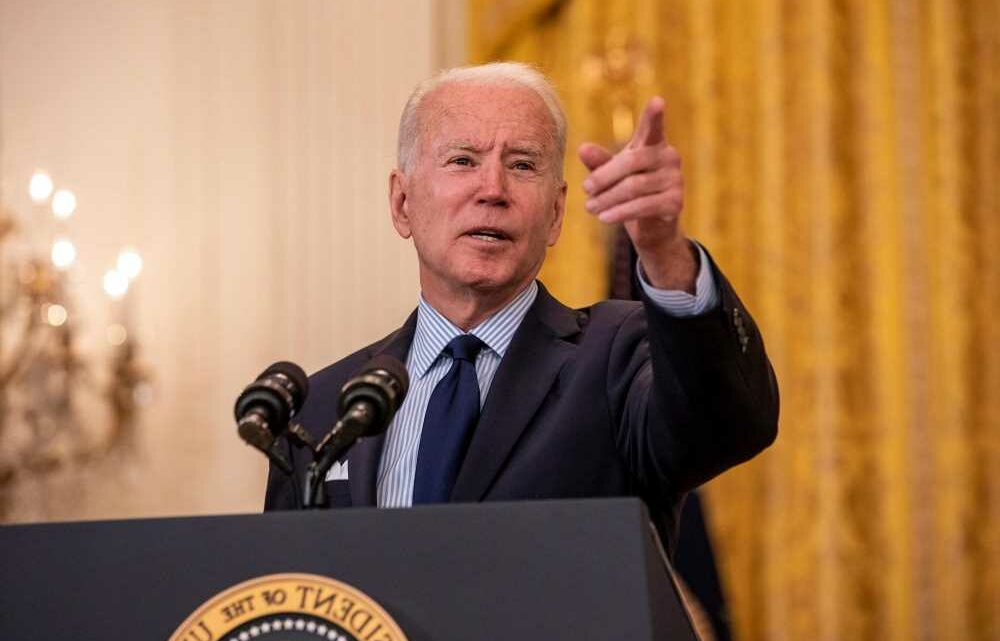 President Biden on Friday insisted that disappointing jobs growth isn’t the result of a federal unemployment insurance supplement — even though business owners say they can’t get enough workers to come back.

The US added just 266,000 new jobs in April — far below estimates of around 1 million as the economy rebounds from the COVID-19 pandemic.

Republicans and business groups blame the $300 weekly federal subsidy that runs through Sept. 6, which allows some low-wage workers to make more money staying home than returning to work.

But Biden said the jobs figures actually show “more help is needed” via his $4 trillion infrastructure and “families” proposals and denied the slowdown is because of the subsidy that he signed into law in March.

“Today’s report is rebuttal to loose talk that Americans just don’t want to work,” Biden said at the White House.

“I know some employers are having trouble filling jobs. But what this report shows is that there’s a much bigger problem — notwithstanding the commentary you might have heard this morning. It is that our economy still has 8 million fewer jobs than when this pandemic started. The data shows that more workers — more workers — are looking for jobs and many can’t find them.”

Biden said that his own father was in emotional turmoil when he didn’t have a job, and that he believes few middle-class people would choose to be unemployed.

“The idea that they don’t want to work? Most middle-class, working-class people that I know think the way my dad did … A job is a lot more than a paycheck, he’d say, ‘Joey, it’s about your respect, your dignity, your place in the community,’” Biden said.

A reporter asked Biden: “Do you believe enhanced unemployment benefits had any effect on diminishing a return to work in some categories?”

The president replied, “No, nothing measurable.”

“There’s no question that we’re hearing from businesses that they are having difficulty hiring workers,” Yellen said.

But Yellen argued that there’s no data associating lower job-seeking with states that have more generous base unemployment benefits.

“If it were really the extra benefits that were holding back hiring, you’d expect to see that in either in the states, or in workers, or in sectors where the replacement rate to the UI is very high, you’d expect to see lower job-finding rates, and in fact what you see is the exact opposite,” she said.

“In order to receive any kind of unemployment benefit, claimants must be available and actively seeking work, and workers are not permitted to refuse suitable work and continue to receive benefits,” Psaki said. “That all remains true, including under the pandemic UI program. You’re only allowed to refuse work and continue to receive benefits if you’re sick with COVID, taking care of someone sick with COVID or offered a job in an unsafe workplace.”

At least two states — Montana and South Carolina — plan to end long-term pandemic unemployment benefits next month amid widespread anecdotal reports from business owners of being unable to rehire their former workforce.

A University of Chicago study found that 42 percent of people claiming unemployment insurance earn more through the government checks than they did at their prior jobs, not counting health insurance aid that also helps the unemployed.

The US Chamber of Commerce, which separately found about 25 percent of people take home more not working, on Friday blamed the $300 supplement for the jobs slowdown.

“The disappointing jobs report makes it clear that paying people not to work is dampening what should be a stronger jobs market,” said Chamber of Commerce executive vice president and chief policy officer Neil Bradley. “One step policymakers should take now is ending the $300 weekly supplemental unemployment benefit.”

Peloton CEO speaks out amid treadmill recall after child's death