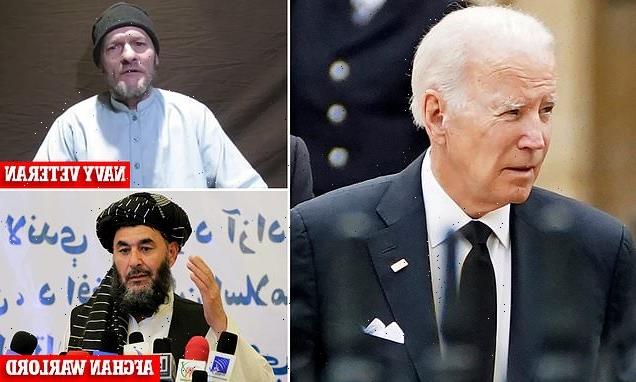 Biden: 'Difficult decisions' before swap of Navy vet for warlord

Biden hinted at the complexity of the move hours after Taliban celebrated the return of Bashir Noorzai, who had been a backer of Mullah Mohammad Omar but who also cooperated with the U.S. after the 2001 invasion of Afghanistan – handing over truckloads of weapons before his arrest in the U.S. on drug charges.

Biden explained the move as part of his effort to ‘prioritize the safe return of all Americans’ – including retired Navy engineer Mark Frerichs, who was abducted in 2020 and whose return the administration set as a ‘non-negotiable ‘priority.’

‘Today, we have secured the release of Mark Frerichs, and he will soon be home,’ Biden said, 31 months after the Americans’ capture.

Biden thanked U.S. officials and ‘partner governments for their ‘tireless work’ on the case, and saying he spoke with Frerichs’ sister Monday to ‘express how happy I am for Mark’s family.’

‘Bringing the negotiations that led to Mark’s freedom to a successful resolution required difficult decisions, which I did not take lightly,’ Biden said.

‘My Administration continues to prioritize the safe return of all Americans who are held hostage or wrongfully detained abroad, and we will not stop until they are reunited with their families. We have much more work to do in many other cases, but Mark’s release demonstrates our enduring commitment.’

Biden also pointed to other Americans held abroad – following a Friday meeting with the wife of Brittney Griner, the U.S. basketball star being held in Russia.

‘Like our work to free Americans held in Burma, Haiti, Russia, Venezuela, and elsewhere, it is our duty to do all we can to bring our people home,’ Biden said.

Griner’s case, which has been stalled even as the U.S. urged Russia to consider the latest American officer, is another case likely to involve difficult decisions.

There have been reports the U.S. offered convicted arms trafficker Viktor Bout in exchange., although the government won’t confirm details of its offer.

When a federal jury in Manhattan convicted Noorzai in 2008, prosecutor David O’Neill called him a ‘drug dealer on a massive scale, a global heroin trafficker driven by greed for money and for power, a man who has made himself rich off the misery of others.’

‘Most importantly, after initial assessment, it appears that Mark is in stable health. He has been offered a range of support options after his time in captivity,’ a senior administration official told reporters on a call Monday.

‘We consulted with experts across the U.S. government who assessed that Noorzai’s return to Afghanistan would not materially change any risk to Americans emanating from the country or the nature of the drug trade there,’ said the official.

‘The President made the difficult decision this summer in June to grant clemency to Noorzai if that meant bringing an American home where he belonged and reuniting him with his family who missed him,’ the official added.

The official pointed to strike that killed al Qaeda leader Ayman al-Zawahiri, and said Frerichs was ‘foremost on the president’s mind’ when he made that decision weeks after deciding he would grant clemency for Noorzai to bring home Frericks.

The U.S. released Noorzai, who had been  held since 2005 for heroin in the prisoner swap.

Noorzai was exchanged with Frerichs at the airport in Kabul, a news conference was today told by acting foreign minister Amir Khan Muttaqi.

The US had sentenced Noorzai to life imprisonment for smuggling more than $50 million worth of heroin into the United States and Europe and he served 17 years in an American jail.

Engineer and U.S. Navy veteran Frerichs, from Lombard, Illinois, worked in Afghanistan for a decade on development projects. He was abducted in February 2020.

Noorzai’s return to Kabul was celebrated with a hero’s fanfare by the government of the new Islamic Emirate of Afghanistan (IEA), the name the Taliban have given the nation since seizing power last August.

Photographs and video show that he was greeted by masked Taliban fighters bearing floral garlands.

He was embraced as the garlands were placed around his neck and his hand was kissed by one of the fighters.

Referring to the Taliban at the news conference, Muttaqi said: ‘The Islamic Emirate of Afghanistan is ready to solve problems by negotiation with all including the United States.’

The news conference were briefly addressed by Noorzai, alongside Muttaqi and the Taliban’s acting deputy prime ministers.

He said: ‘I am proud to be in the capital of my country among my brothers.’ 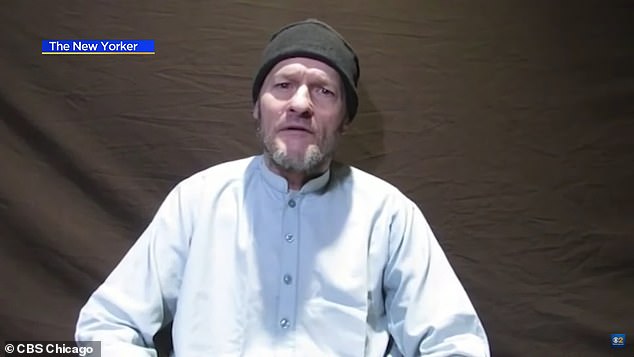 Engineer and U.S. Navy veteran Mark Frerichs, from Lombard, Illinois, worked in Afghanistan for a decade on development projects. He was abducted in February 2020. Pictured: Frerichs in April 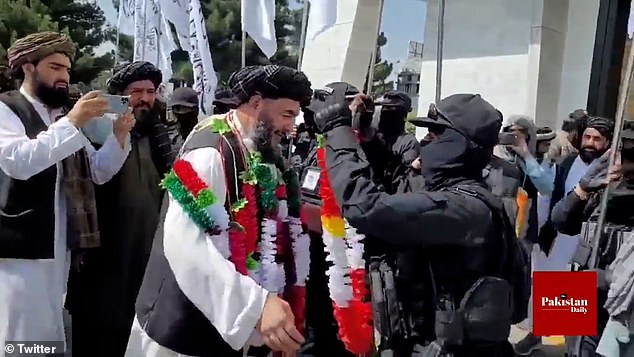 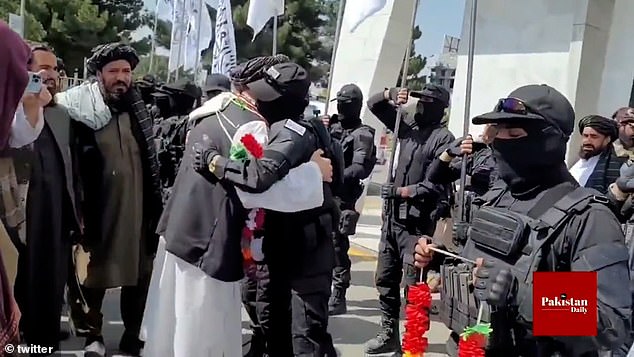 The Taliban fighters who greeted him embraced him, with one kissing his hand

Noorzai said at the news conference: ‘If the IEA had not shown its strong determination, I would not have been here today.’

He had longstanding ties to the Taliban and was an early supporter of the regime.

His lawyer denied that he was a drug dealer and argued that the charges should be dismissed because U.S. government officials duped him into believing he would not be arrested. 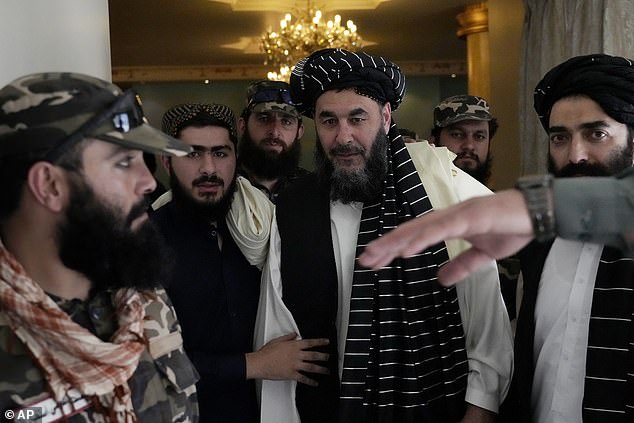 Frerichs was exchanged at the airport in Kabul, with Bashir Noorzai, a news conference was today told by acting foreign minister Amir Khan Muttaqi. Pictured: Bashir Noorzai, center, a senior Taliban detainee held at Guantanamo attends his release ceremony, at the Intercontinental Hotel 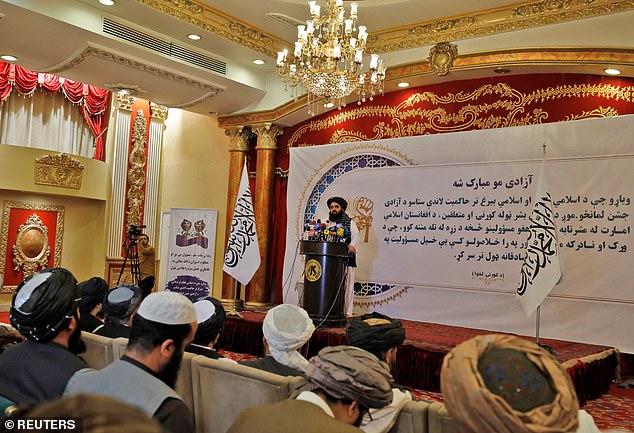 The news conference were briefly addressed by Noorzai, alongside Muttaqi and the Taliban’s acting deputy prime ministers. He said: ‘I am proud to be in the capital of my country among my brothers.’ Pictured: Muttaqi addresses the news conference in Kabul, Afghanistan 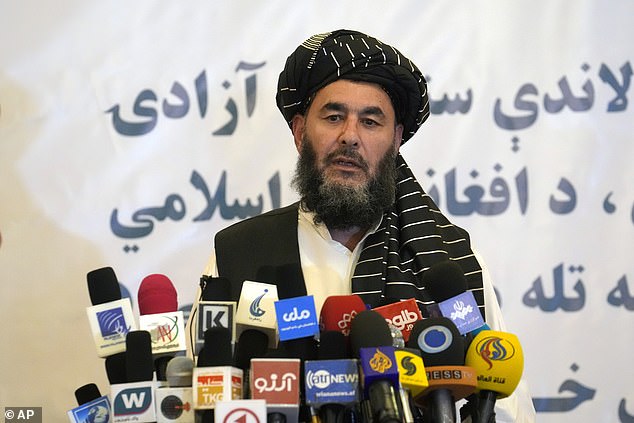 Pictured: Noorzai speaks during his release ceremony, at the Intercontinental Hotel, in Kabul, Afghanistan 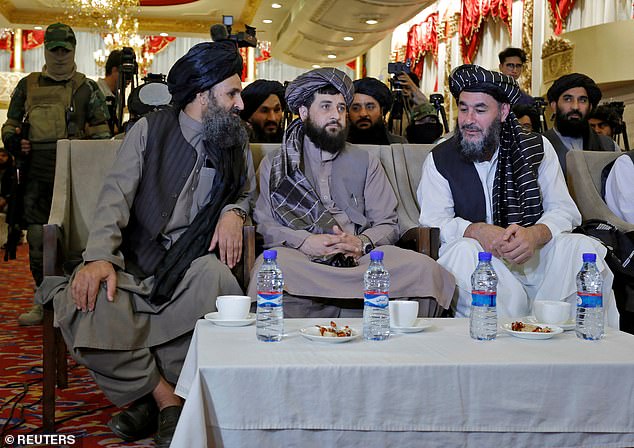 While Noorzai held no official position, he had ‘provided strong support including weapons’ for the Taliban in the 1990s, government spokesman Zabihullah Mujahid said.

From 1979 to 1989 he fought the Soviet forces that occupied Afghanistan.

Noorzai was left in charge of Kandahar when Mullah Omar went into hiding.

Before his arrest, Noorzai worked as an undercover agent on behalf of the US government.

Although he was among America’s most wanted drug traffickers, he was lured to the US in 2005 for talks and arrested 11 days later. 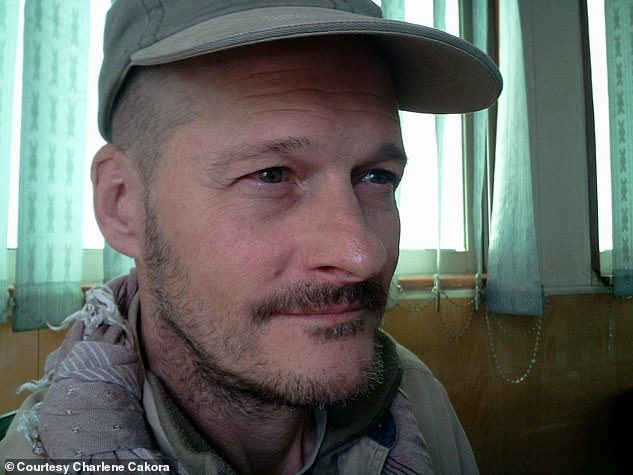 Previously, the US had pushed for the release of Frerichs, pictured, including after the Taliban took over Afghanistan in August 2021, as U.S-led foreign forces were withdrawing

Previously, the US had pushed for the release of Frerichs, including after the Taliban took over Afghanistan in August 2021, as U.S-led foreign forces were withdrawing.

America’s state department had described the veteran’s release as one of the government’s ‘core, non-negotiable priorities’.

Joe Biden said in a statement in January: ‘The Taliban must immediately release Mark before it can expect any consideration of its aspirations for legitimacy. This is not negotiable.’

Officials in the US have said that Frerich’s case would influence their view on the legitimacy of a Taliban-led government.

The Taliban has not been formally recognised by any foreign government, partially due to the group’s restriction of most girls from education.

It seized power in Afghanistan a little over a year ago and renamed the area the Islamic Emirate of Afghanistan (IEA) after the United States and their NATO allies withdrew from the country in a move which shocked the world. 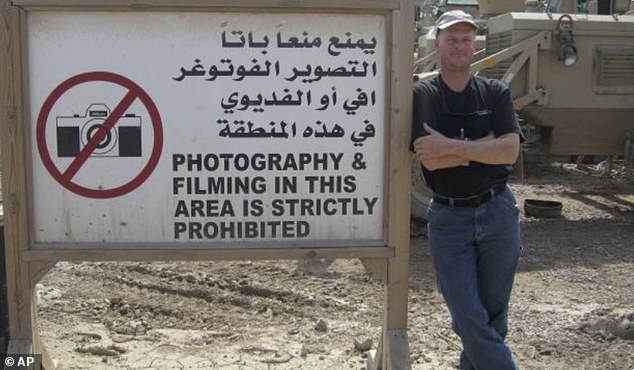 America’s state department had described the veteran’s release as one of the government’s ‘core, non-negotiable priorities’. Pictured: Undated photo of Frerichs

Who is Bashir Noorzai? 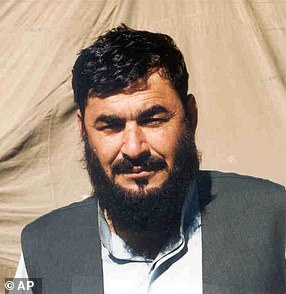 Bashir Noorzai is a convicted former Afghan drug lord. He was an early supporter of the Taliban movement and later worked as an undercover agent on behalf of the U.S. government.

Haji Bashir Noorzai’s case drew worldwide attention. He was part of an operation that sent millions of dollars of heroin around the world.

On 1 June 2004, he was sanctioned under the Foreign Narcotics Kingpin Designation Act.

Noorzai was lured to New York in 2005 to meet with American officials, assured that he would not be arrested, even though he was among the US’s most wanted drug traffickers.

But after days of talks with federal agents, he was arrested and in 2009 was sentenced to life in jail.

Noorzai had insisted that he did nothing against the US government, people or legal system before his sentencing.

He had led a tribe of a million people and told the court that he wanted to bring ‘peace and stability’ to his country.

The judge said that Noorzai’s involvement in drugs were harmful to the people of his country.

Denny Chin added that he was not convinced his efforts to assist the US were viable reasons to reduce his sentence.

Noorzai was in Quetta when the September 11 attacks occurred, and soon afterwards returned to Afghanistan.

In November 2001, he met with men he described as American military officials at Spinboldak, near the Afghan-Pakistani border. Small teams of U.S. Special Forces and intelligence officers were in Afghanistan at the time, seeking the support of tribal leaders.

According to his lawyer, Noorzai was taken to Kandahar, where he was detained and questioned for six days by the Americans about Taliban officials and operations.

He agreed to work with them and was freed, and in late January 2002 he handed over 15 truckloads of weapons, including about 400 anti-aircraft missiles, that had been hidden by the Taliban in his tribe’s territory.

But he had also provided money and arms to the Taliban and had been heard on the phone in 2002 calling the US his ‘enemy.’

Bashir Noorzai fought the Soviet forces that occupied Afghanistan from 1979 to 1989.

He was left in charge of Kandahar after Mullah Omar went into hiding.