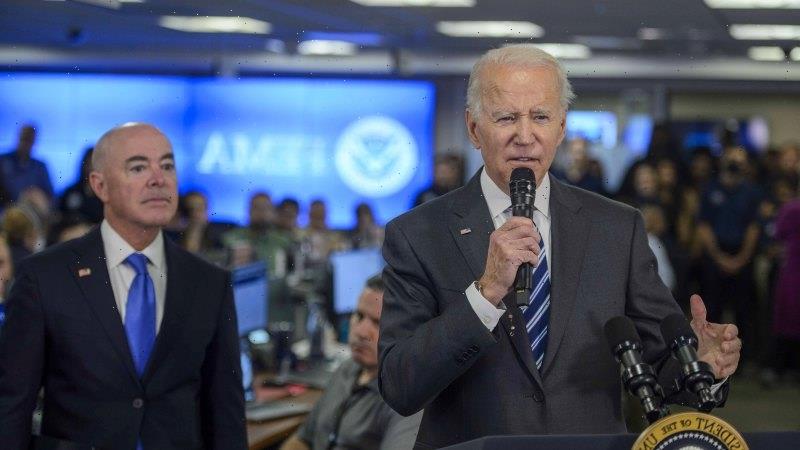 Washington: President Joe Biden said “our entire country hurts” along with the people of Florida after Hurricane Ian flooded communities across the state, knocked out power, forced people into shelters, and raised fears of a “substantial loss of life”.

On Thursday (US time), Biden said the storm could up as the “deadliest hurricane in Florida’s history”. 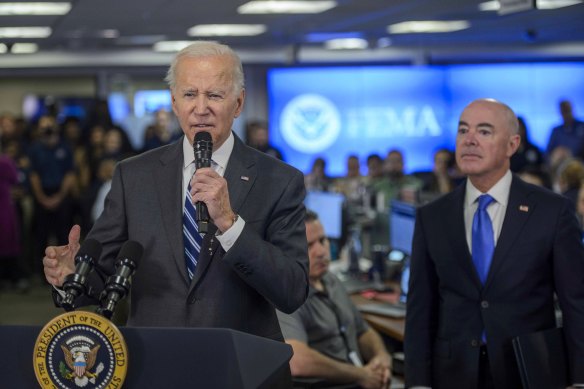 The destruction began to come into focus on Thursday (US time) after Ian made landfall in Florida as one of the strongest hurricanes ever to hit the US. The storm flooded homes on both of the state’s coasts, cut off the only bridge to a barrier island, destroyed a historic waterfront pier and knocked out electricity to 2.67 million Florida homes and businesses, nearly a quarter of utility customers.

At least one man was confirmed dead.

During a visit to the headquarters of the Federal Emergency Management Agency, where he was briefed on federal response efforts, the president said, “the numbers are still unclear, but we’re hearing early reports of what may be substantial loss of life.”

Biden said he would visit Florida and meet with Republican Governor Ron DeSantis when “conditions allow”. The president said he would also visit Puerto Rico, a US territory, that was slammed earlier this month by Hurricane Fiona. 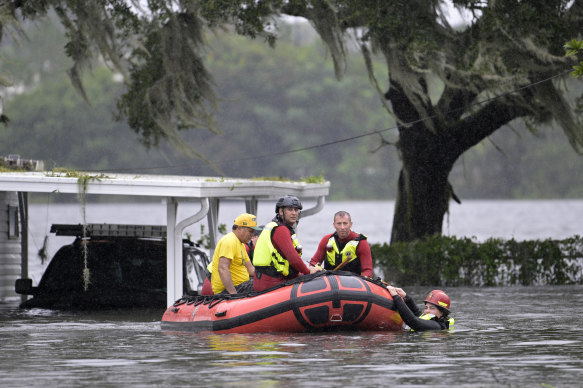 First responders with Orange County Fire Rescue use an inflatable boat to rescue a resident from a home in the aftermath of Hurricane Ian.Credit:AP

“We know many families are hurting,” Biden said at FEMA’s National Response Coordination Centre, where teams of specialists from across the federal government and partner organisations were monitoring the storm and assisting in recovery efforts. “Our entire country hurts with them.”

He urged those affected by Ian to take seriously the warnings from local officials to stay safe and remain indoors.

“Don’t go outside unless you have to,” Biden said. “The danger is real, to state the obvious. Please obey all warnings and direction from emergency officials.”

Earlier in the day, DeSantis said the state had “never seen storm surge of this magnitude”.

“The amount of water that’s been rising, and will likely continue to rise today even as the storm is passing, is basically a 500-year flooding event,” he said.

Sheriffs in southwest Florida said 911 centres were inundated by thousands of stranded callers, some with life-threatening emergencies. The US Coast Guard began rescue efforts hours before daybreak on barrier islands near where Ian struck, DeSantis said. More than 800 members of federal urban search and rescue teams were also in the area.

In the Orlando area, Orange County firefighters used boats to reach people in a flooded neighbourhood. A photo the department posted on Twitter showed one firefighter carrying someone in his arms through knee-deep water. At an area nursing home, patients were carried on stretchers across floodwaters to a waiting bus.

Authorities confirmed at least one Florida death: a 72-year-old man in Deltona who fell into a canal while using a hose to drain his pool in the heavy rain, the Volusia County Sheriff’s Office said. Two other storm deaths were reported in Cuba.

Though downgraded to a tropical storm by Thursday morning, the National Hurricane Centre said storm surge and flooding rains remained a threat as Ian crept across the Florida peninsula and emerged in the Atlantic Ocean north of Cape Canaveral. Forecasters predicted Ian would regain some strength while turning northward.

A hurricane warning was issued for the South Carolina coast, where the storm was expected to again make landfall, having already hit Cuba and Florida.

Biden declared a major disaster in parts of Florida at DeSantis’ request, freeing up additional federal assistance to state and local governments and individuals. FEMA Admnistrator Deanne Criswell said more counties would likely be added to the disaster declaration as assessments were carried out.

Asked if his administration would need additional money from Congress to respond to the storm, Biden said, “we may”.

Biden said DeSantis, with whom he has squabbled politically, was “extremely happy” with the federal response. The president said “this is not about anything having to do with our disagreements politically. This is about saving people’s lives, homes and businesses.”

Biden also spoke to the people of Puerto Rico, who are cleaning up and trying to rebuild after Hurricane Fiona ravaged the US island territory before Ian pummeled Florida on Wednesday.

“I’m committed to you and the recovery of the island,” he said. “We’ve not gone away.”

Shameless thug, 30, gave newborn baby COCAINE while he was meant to be caring for the child | The Sun