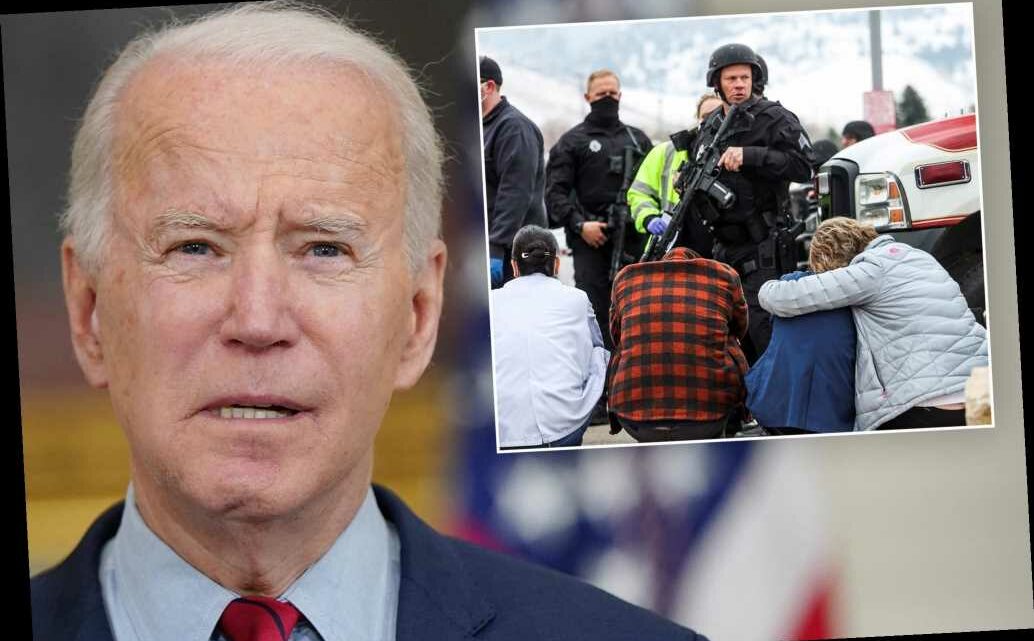 Boulder shooting victim, 20, was training to be a pilot

Half-naked Boulder shooting suspect asked for his mom during arrest

What we know about the assault rifle used in Boulder massacre

A “devastated” President Biden said Congress should immediately take action to curb access to guns and “ban assault weapons” as he spoke out Tuesday on the deadly mass shooting at a Boulder, Colo., supermarket that left 10 people dead, including a cop he hailed as “an American hero.”

The president called for legislation to curb gun violence one day after Ahmad Al Aliwi Alissa allegedly opened fire inside a King Soopers grocery store, killing 10 people including responding cop Eric Talley before he was taken into custody.

“Ten lives have been lost, and more families have been shattered by gun violence in the state of Colorado,” said Biden from the White House. “Jill [Biden, the first lady] and I are devastated.

“I don’t need to wait another minute, let alone an hour, to take common-sense steps that will save lives in the future,” he continued. “And to urge my colleagues in the House and Senate to act. We can ban assault weapons and high-capacity magazines in this country once again.”

The president touted his previous work in Congress during the 1990s to curb access to assault weapons, and called on those who succeed him to continue the effort.

“That’s one of the best tools we have right now to prevent gun violence,” he said. “The United States Senate — I hope some are listening — should immediately pass the two House-passed bills which close loopholes in the background check system.”

Noting that the legislation received both Republican and Democratic support, Biden continued, “This is not and should not be a partisan issue. This is an American issue. It will save lives. … We should also ban assault weapons in the process.”

Biden also spoke of both those who survived the nightmarish assault and those who did not.

“I just can’t imagine how the families are feeling … who now have to struggle to go on and try to make sense of what’s happened,” he said. “Our hearts go out to the survivors, who had to flee for their lives, and who hid, terrified, unsure if they would ever see their families again, their friends again.”

“I commend the exceptional bravery of Officer Eric Talley, and I send my deepest condolences to his family,” he said. “He thought he’d be coming home to his family and his seven children. But when the moment to act came, Officer Talley did not hesitate in his duty, making the ultimate sacrifice in his effort to save lives.

“That’s the definition of an American hero.”

The 21-year-old Alissa, who is hospitalized in stable condition with a gunshot wound of his own, faces 10 counts of first-degree murder.

Investigators have yet to identify Alissa’s alleged motive, though his older brother told the Daily Beast that he believed the alleged gunman is mentally ill.

Long has allegedly told authorities he suffered from a sex addiction and was seeking to “eliminate” the “temptation” that the spas made him feel.

But, as six of the eight killed were Asian women, investigators continue to probe whether racial hate may have been a factor in the deadly spree, which came amid a nationwide wave of anti-Asian attacks.