Washington: US President Joe Biden has marked the first anniversary of the Capitol attack by warning that America is at a crossroads and has urged the country not to accept election subversion as the norm in the wake of Donald Trump.

Twelve months after thousands of Trump supporters stormed the US Capitol building in Washington, Biden has taken direct aim at his predecessor’s involvement in the January 6 riot and accused him of spreading “a web of lies” over the 2020 election “because his bruised ego matters more to him than our democracy or our constitution”. 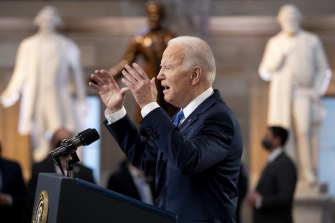 Joe Biden spoke for 30 minutes; while he did not mention Donald Trump by name, it was his toughest attack yet on his predecessor. Credit:EPA

In his strongest attack on Trump since taking office, the Democrat leader also renewed warnings about the ongoing threat by superpowers China and Russia, who were “betting that democracy’s days are numbered”.

“We cannot allow ourselves to be that kind of nation. The way forward is to recognise the truth and to live by it.”

The President made his 30-minute speech on Thursday morning (Friday AEDT) from the Capitol building’s Statuary Hall – an historic part of the chamber where, on this day last year, rioters roamed freely after breaching police lines, taking selfies and holding Confederate flags.

This morning, however, the atmosphere in snow-filled DC was far more sombre. While there had been warnings of potential protests across some states, and parts of Capitol Hill had been fenced off to the public, there were no early signs of major unrest. 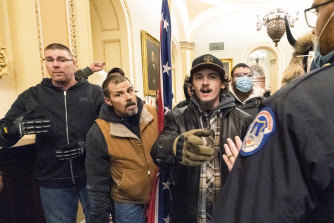 A year ago, Trump supporters roamed the hall after breaking through doors and windows to get inside the Capitol building. Credit:AP

Standing at a podium shortly after 9am, Biden recounted in detail the events of January 6, 2021: from “American flags being used as weapons,” and “fire extinguishers being thrown at police officers” to rioters roaming the halls “menacing” House Speaker Nancy Pelosi.

Without naming Trump directly, he then unleashed a scathing attack on his predecessor, rejecting his claim of a fraudulent election and describing him “not just the former president – he’s the defeated former president.”

“We must decide what kind of nation we are going to be.”

“For the first time in our history, a President had not just lost an election – he tried to prevent the peaceful transfer of power as a violent mob reached the Capitol,” Biden said.

“But they failed… and on this day of remembrance, we must make sure that such an attack never, never happens again.”

Trump – who is considering running for the White House again in 2024 – had planned to mark the anniversary of January 6 with a press conference at his Mar-a-Lago resort in Florida on Thursday evening, but cancelled the event earlier this week amid concerns by some Republicans.

He nonetheless put out a statement moments after Biden’s speech, saying the President was using his name to further divide America, and accused the Democratic leader of “destroying our nation with insane policies of open borders, corrupt elections, disastrous energy policies, unconstitutional mandates, and devastating school closures”.

“This political theatre is all just a distraction for the fact Biden has completely and totally failed,” Trump said.

Biden’s speech was followed by a moment of silence on the House floor and testimonials from Congressional Democrats about the attack. Republicans were mostly absent, many instead travelling to Georgia to attend the funeral of late senator Johnny Isakson.

However, in an unexpected visit, former US vice-president to George Bush, Dick Cheney, now 80, appeared in the building with his daughter Liz Cheney, one of the few Republicans who has spoken out about Trump and now sits on the House committee investigating the riot.

Outside, visitors also remained polarised about Trump’s role on January 6. One woman, who did not wish to be named, said the former president should not be held responsible for the actions of others, while Colorado resident Stephen Parlato said: “I’m scared to death about what is happening to my country.” 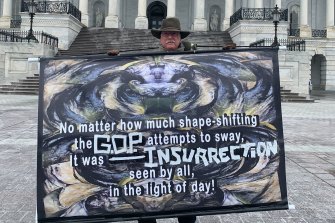 Holding up a banner that read “No matter how much shape-shifting the GOP attempts to sway, it was Insurrection seen by all in the light of day,” Parlato said he had travelled to Washington specifically for the January 6 anniversary and was “horrified by the continuation of the ‘big lie’ (a Democrat reference to Trump’s claim that the election was rigged) and the continuation of it by Republicans.”

Earlier, former White House press secretary Stephanie Grisham, who resigned on January 6 last year, revealed on CNN that about 15 former Trump officials would meet next week to discuss how they might stop the former president from continuing to “manipulate” his party over claims of election fraud. 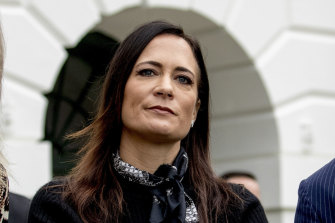 Trump continues to be the most powerful figure in the GOP according to published opinion polls. In the latest Reuters/Ipsos poll released a few days ago, 54 per cent of the Republicans viewed him to be the best candidate for the 2024 Republican nomination with Florida governor Ron Desantos a distant second with 14 per cent of the backing.

The Capitol attack took place after Trump supporters attended a rally where the former president urged them to “fight like hell” to stop Biden’s victory from being certified by Congress.

Five people died during the attack, including a QAnon supporter who was shot dead by an officer as she attempted to make her way through a smashed window. About 150 police officers were injured in the event, which also led to Trump’s second unsuccessful impeachment by the House of Representatives.

So far, 725 people have been charged for their roles in the Capitol attack, including members of far-right groups such as the Proud Boys and the Oath Keepers, but hundreds of others are yet to be charged or even found.

January 6 also renewed the debate over voting rights, with Democrats and Republicans once again at odds over new laws to safeguard the electoral system. 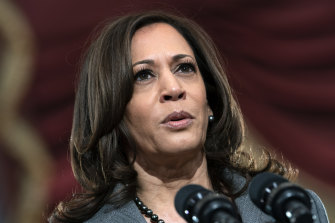 Vice President Kamala Harris compared the Capitol riot to the terrorist attack on the twin towers and the Pentagon and the Japanese attack on Pearl Harbour. Credit:Pool The Hill

Vice-president Kamala Harris, who introduced Biden this morning, warned that democracy in America was so fragile that unless it was preserved it could “falter and fail”.

“We must pass voting rights bills that are now before the Senate and the American people must also do something more. We cannot sit on the sidelines,” she said.

She compared January 6 to other bleak moments in US history, such as September 11.

“Certain dates echo throughout history, including dates that instantly remind all who have lived through them where they were and what they were doing, when our democracy came under assault,” Harris said. “December 7, 1941, September 11, 2001 and January 6, 2021″.