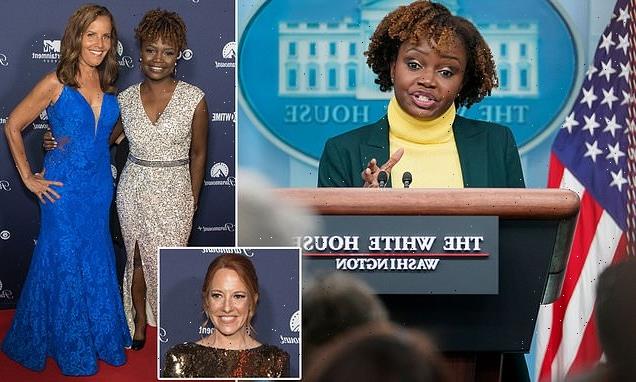 Biden announces Karine Jean-Pierre will replace Jen Psaki as the new press secretary on May 13 when she leaves – and likely goes to MSNBC: Will be first openly-LGBTQ black woman to take podium 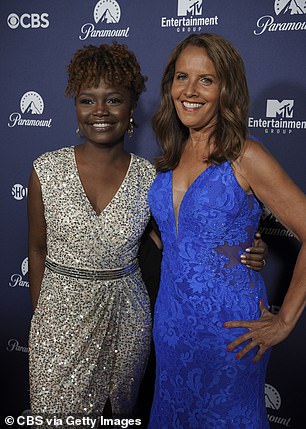 Jean-Pierre will be the first openly LGBTQ+ person to serve as White House press secretary. She lives in DC with her partner, CNN journalist Suzanne Malveaux, and their child (pictured: The couple attend this year’s White House Correspondents Dinner)

President Joe Biden’s deputy press secretary Karine Jean-Pierre will be taking over for Jen Psaki when she leaves the administration on May 13, the White House has announced on Thursday.

It was previously reported that Psaki will be joining left-wing television network MSNBC, though she never confirmed the new gig when asked about it in the past.

Jean-Pierre, 44, will be the first black female White House press secretary and first openly LGBTQ+ person in the role, Psaki said in a tweet celebrating her successor.

‘I am proud to announce that Karine Jean-Pierre will serve as the next White House Press Secretary,’ Biden said in a statement.

‘Karine not only brings the experience, talent and integrity needed for this difficult job, but she will continue to lead the way in communicating about the work of the Biden-Harris Administration on behalf of the American people.’

Biden said he and First Lady Dr. Jill Biden ‘have known and respected Karine a long time and she will be a strong voice speaking for me and this Administration.’

He went on to praise Psaki’ for ‘returning decency’ to the White House briefing room in what appears to be a veiled jab at the Trump administration’s more combative relationship with the press.

‘Jen Psaki has set the standard for returning decency, respect and decorum to the White House Briefing Room,’ Biden said. ‘I want to say thank you to Jen for raising the bar, communicating directly and truthfully to the American people, and keeping her sense of humor while doing so.’ 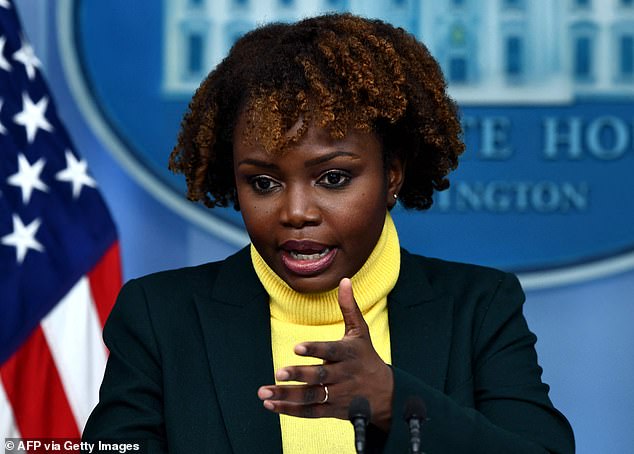 ‘Karine not only brings the experience, talent and integrity needed for this difficult job, but she will continue to lead the way in communicating about the work of the Biden-Harris Administration on behalf of the American people,’ Biden said in a statement 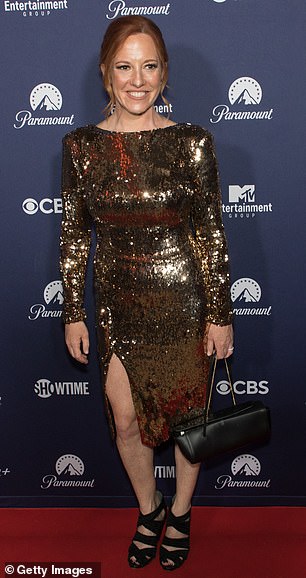 ‘I thank Jen her service to the country, and wish her the very best as she moves forward.’

The Columbia University grad was born in Martinique, and served as chief of staff to now-Vice President Kamala Harris on the Biden campaign.

Jean-Pierre also worked in the Obama administration as Regional Political Director for the White House Office of Political Affairs, and on both of Barack Obama’s presidential campaigns.

Before joining Biden’s presidential bid she was an MSNBC and NBC political analyst and held roles at MoveON.org and the American Civil Liberties Union.

The veteran communications officer lives with her partner, CNN journalist Suzanne Malveaux, and their one child.

Psaki lauded Jean-Pierre’s historic appointment in a statement on Twitter.

‘She will be the first black woman and the first openly LGBTQ+ person to serve as the White House Press Secretary. Representation matters and she will give a voice to many, but also make many dream big about what is truly possible,’ the outgoing press secretary said.

Psaki said Jean-Pierre has ‘decades of experience from her early years working in government and politics in NYC, to her years as an outspoken advocate, to serving as a long-time advisor to [Biden] back when he was the VP.’

‘She is passionate. She is smart and she has a moral core that makes her not just a great colleague, but an amazing Mom and human. Plus, she has a great sense of humor,’ Psaki praised.

Who is Karine Jean-Pierre?

Jean-Pierre, 44, who serves as Psaki’s deputy, has stepped in to fill the press secretary’s shoes on multiple occasions, including during both of Psaki’s covid situations.

She is well-accustomed to the press, having briefed repeatedly on presidential trips and having taken turns at the podium herself without incident or veering off script.

She is known for keeping a close grip on the binder of information compiled for briefers, and takes pains not to get far from its contents. That is what she did when she jumped on President Biden’s trip to Europe last month on short notice following Psaki’s positive covid test. She briefed reporters aboard Air Force One en route, but kept a low profile on the trip during Biden’s rounds of diplomacy.

Jean-Pierre has stepped in for Psaki at the podium multiple times in the first part of Biden’s administration – perhaps most notably when the press secretary was out after testing positive for COVID-19.

Along with her new promotion, the White House also announced Thursday that former senior Biden adviser Anita Dunn would be returning to the administration in the same role.

Dunn left the White House in August 2021. She is also an Obama veteran, having served in the role of acting communications director in the former president’s administration in 2009.

Psaki, for her own part, has kept mum over her future job prospects – presumably for ethical reasons.

When asked about potential ethical concerns about her reportedly joining MSNBC while still at the podium, Psaki said during an April 1 briefing that she has ‘abided’ by any and all ethics guidelines without confirming the report.

‘Well, there are a range of stringent ethical and legal requirements that are imposed on everybody in this administration and many administrations past about any conversations you’re having with future employers,’ she deflected at the time.

‘That is true of any industry you’re working in. And I have abided by those, and tried to take steps to go beyond that as well.’

She added, fresh off a stint of isolation due to COVID: ‘I have nothing to confirm about my length of public service or planned service, or anything about consideration about next plans. I’m very happy to be standing with all of you here today after it felt like a never ending endless time in my basement quarantining away from my family.’