Backstreet Boys talk holidays, 'leaning on one another' during tough times and sweet childhood Christmas memory of Aaron Carter 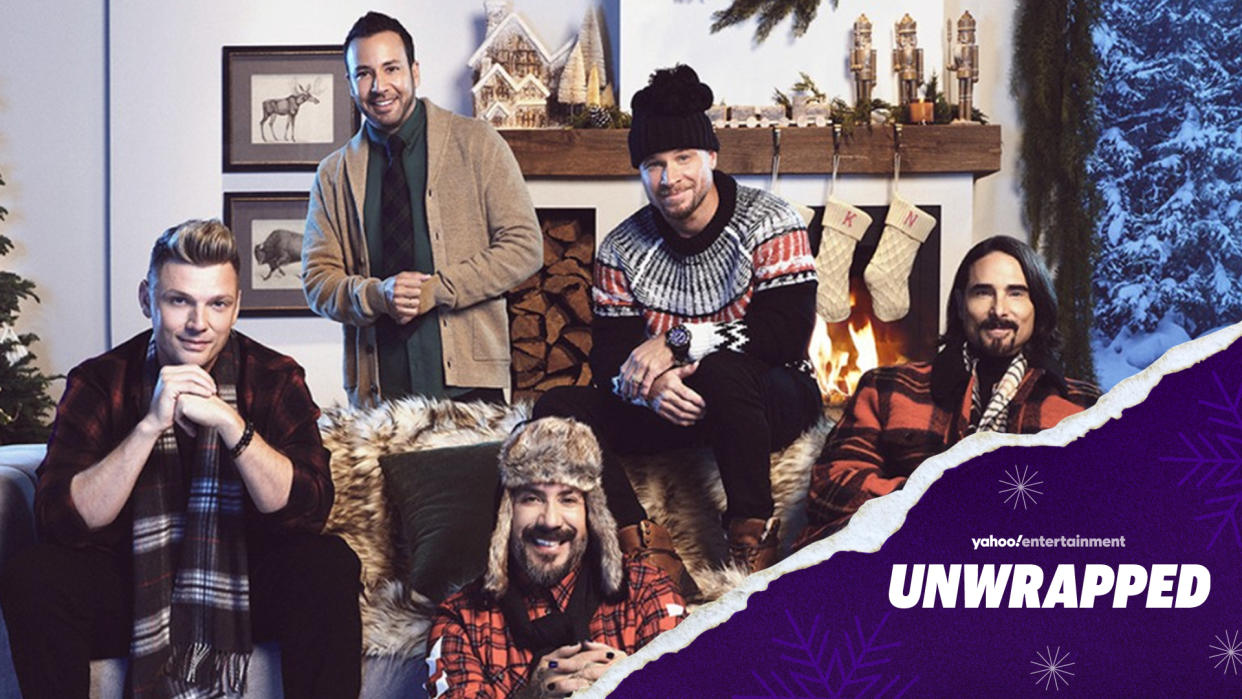 The Backstreet Boys just released their very first holiday album, A Very Backstreet Christmas, and it’s surprising that it took them this long. After all, their boy band peers — New Kids on the Block, *NSYNC, Hanson, 98 Degrees — released their own collections of jingle bell pop many seasons ago.

“We’ve been busy — for, um, going on 30 years!” BSB’s Nick Carter jokes to Yahoo Entertainment via Zoom, sitting on the set right before their live-streamed “JCP Live Holiday Spectacular” with JCPenney, which Carter’s bandmate Kevin Richardson describes as “a variety show-meets-game show-meets-fundraiser-meets-telethon” in conjunction with Feeding America. The quintet will also be making up for lost time with a more traditional TV special, A Very Backstreet Holiday, coming to ABC and Disney+ on Dec. 14.

“But no, [making a holiday album] been a bucket list of ours,” Carter continues. “We grew up listening to holiday songs, Christmas songs. They were in all of our homes when we grew up, and they're special to us. We talked about it for years. … These classic songs are not just our favorites, but they're everyone's out there. And so we wanted to do our best with that. We're really proud of this album. It's charting now, and this is the first time we've actually had an adult contemporary hit — with ‘Last Christmas’ — since ‘I Want It That Way.’”

“And I just want to add that I feel like this Christmas album happened at the perfect time in our lives and where we're at as men, because I feel like the thought, the heart, and the soul that we put into the record, it wouldn't have been the same if we were in our twenties,” notes Richardson. “Like, we're fathers now. We have life experience. And I feel like you feel that in the album.”

As the Backstreet Boys have evolved into men over their long career, they have indeed experienced the ups and downs of life — and Carter just suffered a massive loss right before the holidays, with the tragic death of his younger brother, pop star Aaron Carter, on Nov. 5. As Nick sits with his bandmates — Richardson, Howie Dorough, AJ McLean, and Brian Littrell — he says they’re “leaning on one another” during this tough time, but he seems happy to share a fond Carter family Christmas memory about Aaron.

“Actually, I was telling the guys… we were getting ready to do our ABC Christmas special and we were sharing some stories, and I didn't get an opportunity to share this story,” Nick tells Yahoo Entertainment. “But when we were touring over in Europe, I was around 15 years old, and we were always over in Europe for about three, four years before we actually broke [in America]. And every time we were onstage, things were thrown at us, and there were all these stuffed animals that were thrown at us. This is when we first started; we were just trying to do our best and didn't really have much at the time. So, I collected all these stuffed animals and I bagged them up. It was like a couple days before we got home for Christmas, and I bagged them all up and I put them in this bag, and I literally had like this huge bag on an airplane. I stuffed it in the bin up there and brought it home.

“And that night, I was a little older so I could help my parents decorate and get things prepared, wait for me to help. So, I was ‘Saint Nick’ that night. I decorated everything, and I remember setting up these little footprints going to from the chimney, and I put these cookies out and had a bite out of it. That next morning, all my brother and sisters woke up and they were so excited to see all these stuffed animals underneath the tree. And I actually put on a Santa outfit and I came out dressed up like Santa, and it was just a beautiful time.”

Carter empathizes with other people who are grieving during the holiday season, and since he has a strong support system with his bandmates, he also takes a moment to offer some kind advice to anyone out there who’s feeling lonely or sad. “There are a lot of people out in this world who are going through times dark times in their lives,” he says. “And I encourage anybody out there to find someone — pick up a phone, call someone — and just come together with anybody, the people that you love the most. It definitely can be one of those times during the year, but just know that there's people out there for you.”

The Backstreet Boys have always leaned on each other during hard times, and working on A Very Backstreet Christmas was another example of that. “The silver lining during the pandemic was we had some time we had to stop, and so we jumped into the studio together,” Carter explains. “We hadn't seen each other in about six to eight months. We decorated the studio up in Los Angeles in the middle of summer to look like Christmastime: We had trees, we had yule logs, we had music, we had eggnog, and we had it all in there in the heat of summer. And we picked our favorite songs, the things that we love the most, and then we started recording them. And it took a little while, but I think it's also good that it did take some time, because we were able to perfect it as well. You know, we're a band that sings in harmony, so we really were able to get intricate harmonies in all these songs — make them our own, make them really special.

“People are so hungry for entertainment. They're so hungry to just get together. They want to feel good right now. They just want to come together,” Carter continues. “And I think that's what the Backstreet Boys represents: a good time in people's lives. … And that's what we're giving them. We're giving them an escape from all the crap in the world and just to come together.”

And now, three decades into their career, the Backstreet Boys are celebrating with their first full holiday record, and they’re still charting hits. Did they ever envision this future for themselves when they were just starting out, eking out a meager living on the road and stockpiling stuffed animals?

“We had hoped, when we signed up for this 30 years ago, that we wanted to have a career,” stresses Littrell. “At the end of the day, when you're in the music business, it's not about a flash-in-the-pan, it's not about a one-hit-wonder, it's not about the flavor-of-the-month, or whatever that is. It's kind of like sharing your goal, sharing your life together, and building a career. And that's exactly what we set out to do on April 20, 1993, when we first were introduced to everybody. This journey began, and here we are. I think we love this experience and we love the band even more today than we did years ago. Just sharing our lives together, becoming a part of each other's families, and growing and nurturing each other and being there for one another — that's what makes this band so special. And that's what makes people like, I believe, JCPenney, call up the Backstreet Boys and say, ‘Hey, could you be on this special with us?’ We just want to bring people together. Music brings people together, and having that bond that we've shared for 30 years makes our music even more special.”

Watch Yahoo Entertainment’s full-extended interview with the Backstreet Boys about their holiday album and two holiday specials, the rumor that John Mellencamp protested being on the same record label as BSB, and AJ McLean’s memorable and victorious run on another television show, Secret Celebrity Drag Race: