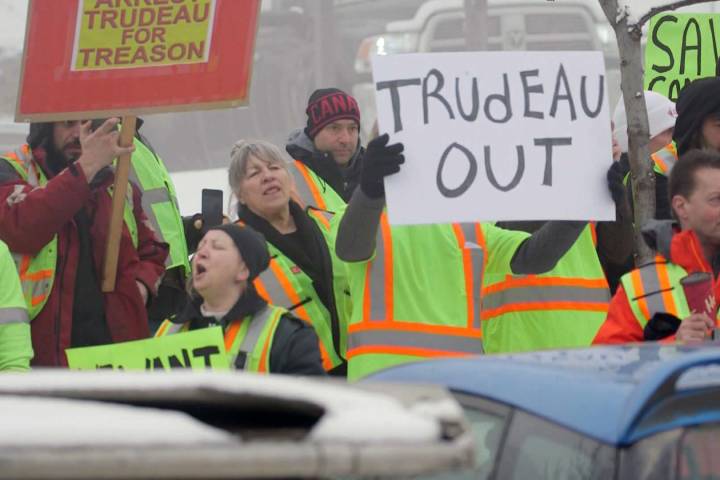 A Kamloops, B.C. radio host has been on the receiving end of a torrent of threats and abuse after posting a critical tweet about Canada’s Yellow Vest movement.

Radio NL host Brett Mineer took to Twitter on Wednesday to comment on what he felt were the uglier elements of the movement, including what he described as racist elements and conspiracy theories.

“Having the Prime Minister come to town and seeing just what gross, terrible human beings are out among us with their delusional conspiracy theories, racism, disrespect and total inability to engage in good faith conversation makes me want to get off this planet ASAP,” tweeted Mineer.

Shortly afterward, in the wake of revelations of threats against the prime minister in the Yellow Vests Canada Facebook group, he hosted a radio show segment focusing on what he called the “fetishization of murder.”

For a guest, he had someone from Yellow Vests Canada Exposed, a Twitter account that has been keeping track of the extreme elements of the movement.

“Someone posted a link to my personal Facebook page, all of the email addresses for the radio station went up on the site, and then the hate started rolling in.”

But he said it didn’t take long for things to cross a line, and soon he was being bombarded with emails and direct messages.

“People had been sleuthing around and they found out where my wife was and they were like, ‘Maybe she should be raped and killed by a Muslim and then maybe he’ll get why this is the worst prime minister ever,’” he said.

“And then somebody else said, ‘Can somebody in Kamloops wait for him outside of the building for when he gets off work and beat the “blank” out of him.’

“I was having trouble holding it together, especially when I saw the stuff about my wife, it was so disgusting and so far below the belt and completely insane.”

On the advice of management, Mineer said he took the threats to the RCMP, who he said are investigating and offered to escort him from the radio station.

Global News has requested comment from the Kamloops RCMP.

Moderators of the Yellow Vests Canada page did not return a request for comment.

The Facebook group describes itself as a protest against the carbon tax and politicians who it claims are selling “our country’s sovereignty over to the globalist UN and their tyrannical policies.”

But in a reply to another Global News reporter following the threats against Prime Minister Trudeau, a moderator said “Yellow Vests Canada is against criminality, violence or the advocacy of violence,” before pinning the blame on “fake” accounts allegedly created by opponents of the movement.

One aspect that Mineer found particularly shocking, however, was that many of the people sending the abuse were not anonymous, and used Facebook profiles completely open to the public.

“These are men and women with families, they’ve got photos at the soccer games and all this, and they’re telling me I should die and my wife should be raped and all the rest,” Mineer told CKNW.

“It’s just insane, and you see who these people are and they look like normal people you would see in the park with their kids… and they’re behaving this way online.”

David Tindall, a UBC sociologist with a focus on social media and social movements, said the distance created by the online environment can allow people to separate themselves from the real impact of what they are saying.

“When you’re doing this on a computer as opposed to, say, face-to-face, you’re not getting a lot of the non-verbal cues that you would get,” he said.

“It’s one thing to kind of threaten people [with] violence, but also when people are writing in all caps or swearing or saying intimidating things, the perpetrators are not seeing the feedback that you would get in a kind of more face-to-face encounter and realize that maybe they need to tone it down.”

Tindall added that the online environment has also allowed people with extreme views who might once have been isolated to come together and feed off each other’s energy.

“In the old days you might have had people who were kind of outliers in terms of their views or what they were willing to say, and they might say it at home at the dinner table or over a neighbour’s fence and kind of get a disbelieving stare and that was the end of it,” he said.

“But now they can seek out people online who share similar views, and that sort of helps build a critical mass of people who are doing this sort of thing and reinforcing one another.”

Tindall said when it comes to politics and social movements, violence and threats have always been a part of the situation — pointing to the U.S. civil rights movement, or threatening talk during B.C.’s environmental “war in the woods” of the 1990s.

But he said he’s seen evidence of increasing polarization in Canada, something he attributes to the breakdown of rules about what’s acceptable south of the border in the Trump era.

“The vast majority are just bluffing, but there’s always one or two of them that aren’t.”

Elizabeth Smart Rejoices After Jayme Closs Is Found Alive: 'What a Miracle'