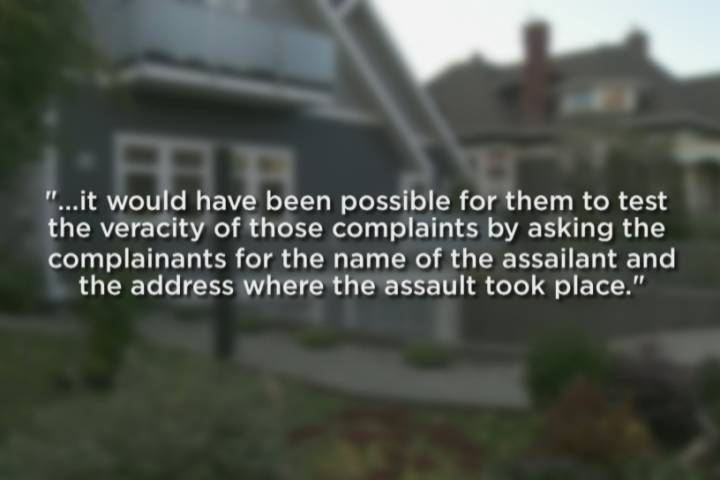 Police agencies often provide the public with scant details about ongoing investigations – but a B.C. judge says the Victoria Police Department gave out too much information in a recent case that ended with a massage practitioner’s acquittal on sexual assault charges.

On Oct. 20, 2017, the Victoria Police Department shared a post about an ongoing sexual assault investigation with its Facebook followers. The notice was also posted under ‘News Releases’ on the department’s website.

It said investigators were looking to speak with more alleged victims after the arrest of a 65-year-old Victoria massage practitioner,  who had been charged with one count of sexual assault three months earlier. The post revealed the name and location of the massage business, and the name of the suspect, John Heintzelman.

Criminal lawyer Sarah Leamon, who is not connected to the case, said the public notice “was atypical in that it identified quite a few personal details with respect to the person that they were investigating.”

Another alleged victim came forward to Victoria Police on the same day the notice was posted – claiming she was sexually assaulted in 2013 but did not report it at the time because “I was worried that I would not be believed because of my mental health issues.”

In his Dec. 20, 2018 judgment, Provincial Court judge Ted Gouge said he was concerned by the Facebook notice published by the Victoria Police Department. The judge stated it would have been better if the notice omitted the suspect’s name and business location and referred instead to “a male *massage therapist” and “his home studio in Victoria.”

“If the police had published such a notice, and received one or more complaints in response, it would have been possible for them to test the veracity of those complaints by asking the complainants for the name of the assailant and the address where the assault took place,” Gouge wrote in his ruling.

At trial, Gouge found each witness presented as “eminently credible” and wrote that “there was nothing in their demeanour or in the presentation of their evidence which caused me to doubt their veracity of the accuracy of their recollection.”

According to the judgment, Heintzelman gave evidence and “denied that he touched either complainant in a sexual fashion.”

His wife also testified that she was home on July 2, 2017, the date of the original complainant’s massage session, and heard nothing unusual from where she was sitting in the living room, which is directly above the massage studio.

Both complainants gave similar accounts of the alleged sexual assaults in evidence the Crown submitted was “corroborative of the other,” but the judge noted two factors which he felt reduced the corroborative weight of their similar evidence: too little information to assist him in assessing the impact of the second complainant’s mental illness on the reliability of her evidence and too much information in the Victoria Police Department Facebook post, including the name and address of the accused.

“Because those details were included in the notice published in this case, it was not possible for the police to test the veracity of (the second complainant) by asking her those questions,” wrote Gouge.

“At the end of the day, the judge was unable to determine which version of events — the complainant’s version or the accused person’s version — was more credible,” Leamon said.

Unable to decide who to believe, the judge was forced to acquit Heintzelman of the two sexual assault charges.

“This was really a caution to police departments across the country in ensuring that they’re not releasing prejudicial content.”

Gouge ended his ruling with a warning: “The police should also be conscious that the publication of a notice containing the name of the suspect may prejudice the right of the accused to a fair trial, particularly where the accused elects trial by jury; and may unfairly damage the reputation and livelihood of the suspect if the allegation is unfounded.”

Victoria Police Department spokesperson Bowen Osoko told Global News via email that “We’re still looking at this one and so are deferring comment to Crown for now.”