Malaysian authorities have refused to renew the work visas of two Australian journalists who are being investigated for a documentary they made for the Al Jazeera news network.

Filmmakers Drew Ambrose and Jenni Henderson are two of five Australians among seven journalists being investigated for sedition, defamation and violation of the Communications and Multimedia Act. 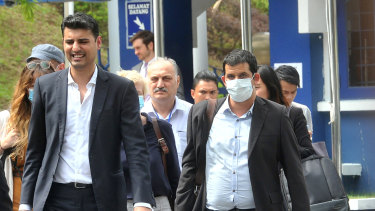 Their documentary, Locked Up in Malaysia's Lockdown, aired by the 101 East program on July 3, examined the harsh treatment of undocumented migrant workers in the country during COVID-19 lockdown.

Earlier in the week, police raided the Al Jazeera offices in Kuala Lumpur and seized and seized two hard drives.

The offices of local TV stations Astro and Unifitv, which aired the documentary, were also searched by police.

Al Jazeera English managing director Giles Trendell said the broadcaster had been given no prior notice of the raids and that "obviously, with raids going on, it's a concern".

"Having the renewal rejected for two members of the team is very concerning. It's a way to curtail media freedom and we haven't had this problem in the past. The rest of the team is in the country, it's their home, these aren't parachute journalists. We stand by them and their journalism," he said.

"The authorities said the show was inaccurate, and misleading and unfair. What we are saying is give your supporting evidence. The allegations made in the program were by the key interviewees, a Malaysian doctor and Malaysian human rights worker."

The team had made every effort to seek comment from the government prior to broadcast, Trendell said.

"Even though [authorities] declined to comment, we included footage from press conferences. We went out of our way to get the government's point of view and then to put it into the documentary."

Malaysian authorities also detained a Bangladeshi man interviewed in the documentary after revoking his work permit. They said they would deport him for criticising the government over its handling of undocumented migrants.

Previously Steven Gan, editor of Malaysiakini, one of the country's most respected independent news sites, faced contempt of court charges for comments posted by readers in response to a story published by the site.

Tashny Sukumaran, a Malaysia correspondent for Hong Kong’s South China Morning Post, was questioned by police for her reporting on a crackdown on migrants and asylum seekers while publisher Chong Ton Sin, and editor and academic Kean Wong have been investigated by police because the cover of their book, Rebirth: Reform, Resistance, And Hope in New Malaysia, allegedly insulted the national coat of arms.

Australian National University lecturer Ross Tapsell, who specialises in south-east Asian media, said there was a clear pattern to the broader crackdown underway in Malaysia.

"This is happening now because the government is unstable, the political coalition is unstable, it gives opportunities for others to assert their authority over public discourse," he said.