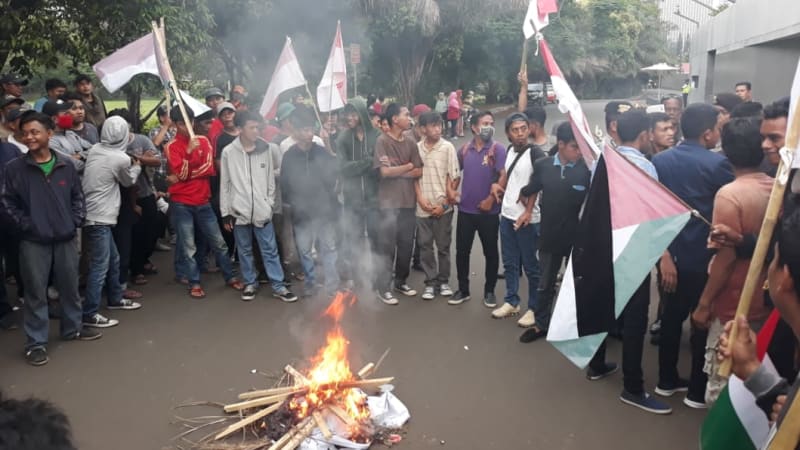 Jakarta: The man who helped pay the protesters demonstrating against Australia at its embassy in Jakarta is the head of "Jomin", one of President Joko Widodo's official volunteer teams campaigning for his re-election.

But Nanang Kosim insisted his role in helping organise and pay for two rallies outside the Australian embassy on Tuesday and Friday last week had nothing to do with his work with the campaign to re-elect Mr Widodo, who is widely known as "Jokowi". 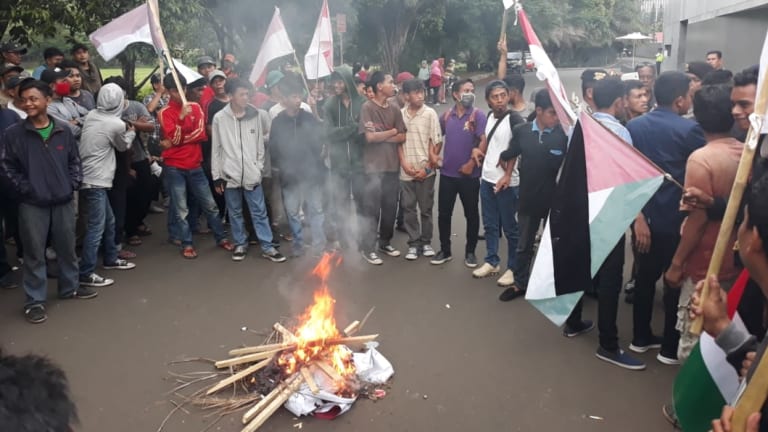 Mr Nanang said instead that it was related to another activist group he recently helped establish, the little-known Unity of Indonesia Muslim League.

The Sydney Morning Herald and The Age revealed last week that many of the people protesting against Scott Morrison's suggestion to move Australia's embassy in Israel from Tel Aviv to Jerusalem were paid  35,000 rupiah each (a little less than $3.50) to appear at the rally. Some had little idea what they were actually protesting against.

The crowd chanted slogans in support of Palestine, opposing the embassy move and criticised Mr Widodo's opponent in the presidential election, Prabowo Subianto, who has said it was Australia's sovereign right to determine the location of its embassy in Israel.

Mr Nanang said: "I am head of Jomin but Jomin is unrelated to this issue. You can Google search my background. I was always there whenever there are protests related to Palestine or Islam.

"I participated in the creation of the 212 Movement," he said. The movement is a large coalition of Islamist protest groups who targeted the Christian former governor of Jakarta Basuki 'Ahok' Tjahaja Purnama for blasphemy in 2016.

Mr Nanang said he had helped create the Unity of Indonesia Muslim League following Australia's announcement that it could shift its embassy in Israel.

Despite insisting the protest had nothing to do with Jomin, Mr Nanang confirmed it was Mr Prabowo's statement about the Jerusalem embassy move that had served as the catalyst for the protest because it gave "the impression that [he] agreed with the moving of Australia’s embassy to Jerusalem". 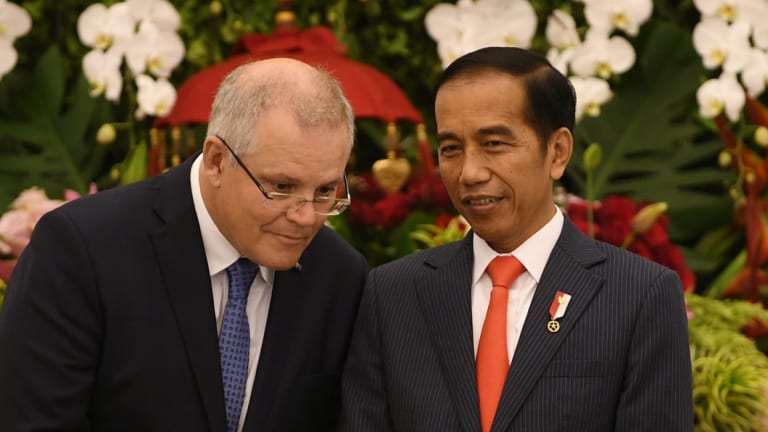 If Australia followed the United States' lead and moved its embassy to Jerusalem, Mr Nanang predicted "Muslims will be the ones who’ll go on the frontline to oppose it. What we did last week was somehow mixed with Prabowo’s [statement] that hurt Muslims.

"But if [Australia] does move its embassy, even pro-Prabowo people will go to Monas [the National Monument in Jakarta and location for large protests]."

Mr Nanang said Jomin was a "big group" and that some 500 people had attended the ceremony when the volunteer group was launched.

He became defensive when asked where the money had come from to pay the protesters to attend the rallies last week.

"Well, I’m telling you, even journalists won’t go covering events without having eaten first. Of course people need to eat before a protest, otherwise how can they be active? It applies everywhere," he said. 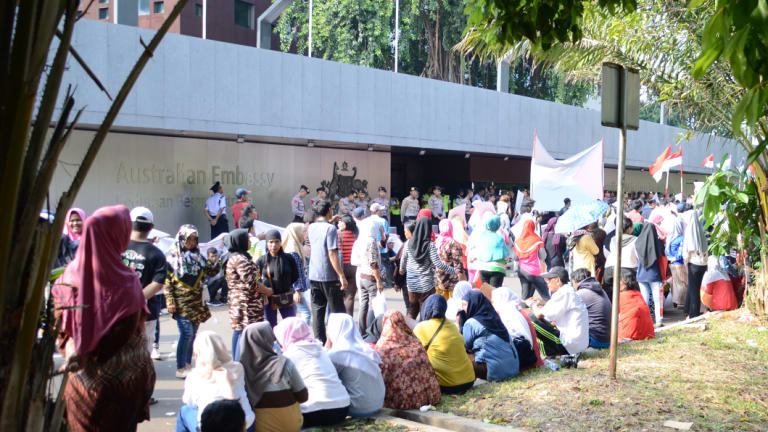 Some protesters were paid to come.

Mr Nanang did confirm, however, that "we used our own money" to pay for buses to bring protesters to the embassy rally.

The name "Jomin" is a combination of Mr Widodo's first name and that of his vice presidential running mate, Maruf Amin, an Islamic scholar and leader of the Nahdlatul Ulama, a moderate Islamic organisation with millions of members in Indonesia.

Several pictures of Mr Nanang with Mr Ma'ruf exist online, and he uses a photo of the pair on his Whatsapp profile.

Jomin is one of about 700 groups officially registered with the Directorate of Volunteers within the Jokowi-Maruf Amin national campaign team.

While it is common for people to be paid to protest in Indonesia, Mr Nanang's affiliation with the official campaign to re-elect Mr Widodo in the April 2019 presidential election is potentially awkward for the Indonesian leader.

Prime Minister Scott Morrison's decision to review whether Australia's embassy in Israel should be moved has caused significant disquiet in majority-Muslim Indonesia. A decision is due before Christmas.

The signing of the Australia-Indonesia free trade agreement has been delayed since the possible move was announced and the Indonesian government has made clear its displeasure with the potential move.

Usman Kansong, the director for political communications for the Jokowi-Ma’ruf national campaign team, said the team was not aware that Mr Nanang was involved in organising and helping pay for the protest.

"We didn’t know it [the protests] took place, let alone paying and supporting them," he said.

As to the appropriateness of Mr Nanang's involvement, Mr Usman said that from a legal point of view, "it is appropriate because in a democratic nation, everybody has the rights to protest, it is just normal … though I’m not saying as a campaign team we supported the protest last week."

Aaron Connelly, a research fellow at Singapore's International Institute for Strategic Studies, said the protest "looks like a half-hearted attempt by Jokowi’s supporters to diminish Prabowo’s credentials as a Muslim leader".

"In that sense, as is often the case with these things, it has more to do with Indonesian politics than Australia or the bilateral relationship. It doesn’t seem to have worked," he said.

"But if Jokowi and his people continue on this path, they could paint themselves into a corner, and make it harder to do the trade deal before the election."

Lowy Institute non-resident fellow Matthew Busch said the connection between the protests and the Jokowi campaign team was "interesting" but cautioned there was a very large number of volunteer groups connected to Mr Widodo's re-election bid and that "they don't always exercise control over these people at all times".

Tyler Baltierra: Why He ‘Doesn’t Want To Be With Other Women’ Despite Separating With Catelynn
World News