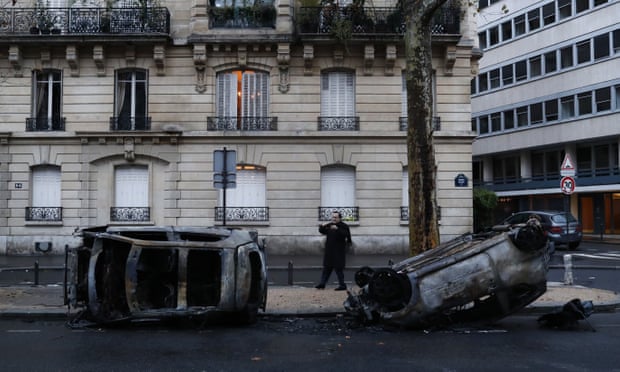 Are the French hit especially hard by fuel taxes?

Despite a backdrop of riots against high fuel levies in France, European commission data shows that taxes on all petrol products have actually fallen in the last two years across the eurozone. The level has fallen from almost 70% of the cost for consumers at the pump to 60.9% at the end of November. In France, it is a similar story, with taxes on fuel (before the increased levy on diesel kicks in) accounting for a smaller proportion of total prices than they did at the start of Emmanuel Macron’s presidency.

The data shows the Netherlands has the highest tax on unleaded petrol in the EU, at 68% of the cost at the pump, while Bulgaria is the lowest at 51%. France’s fuel taxes – 64% on unleaded and 59% on diesel – are among the highest in the EU, but compare evenly with those in the UK.

“It’s often said taxes on diesel and petrol have never been higher than today,” said William Todts, the executive director of Transport & Environment, a non-governmental organisation. “The reality is that, in real terms, fuel taxes are about as high now as they were 20 years ago.”

Rather than taxes, the increase in crude oil prices since the start of 2016 has been the main driver in rising costs for drivers. The retreat of crude prices from an October peak – as an oversupplied market reacts to lower growth prospects – is expected to give relief to Macron in the coming weeks. Here is a summary of the political debate over fuel taxes in other EU countries.

Car manufacturers account for a significant proportion of output from Europe’s largest economy, so it is perhaps unsurprising that there is not much appetite for severe measures against cars – despite the diesel emissions scandal which rocked Volkswagen. Chancellor Angela Merkel has tried to defend the car industry against diesel bans targeted at air pollution in various cities, while little has been done to upgrade emissions hardware.

Spain has launched an ambitious plan to completely decarbonise its economy, including a ban on all new petrol and diesel cars after 2040. The country’s carmakers and unions are gearing up for a fight, saying that the industry is not ready to bear the costs of a move away from fossil fuels towards electric vehicles.

Unleaded petrol prices are considerably higher in Italy than in the rest of the EU. But despite a populist government in power and a struggling economy, Italians have so far shown little sign of joining their French counterparts in protesting on the specific issue of fuel prices.

Ireland’s drivers buy more diesel vehicles proportionally than anyone else in Europe, according to 2017 industry figures, so any move against the fuel may be politically painful. The Irish government has said it is committed to climate change goals, but has hesitated recently on increasing carbon taxes.

A freeze on fuel duty has become an annual tradition in budgets for the last nine years, to the chagrin of environmental groups and weary fiscal forecasters. The Westminster government has banned new petrol and diesel vehicle sales after 2040 – although that lags behind Scotland’s more ambitious 2032 ban.

Belgian police resorted to water cannon and teargas in Brussels last week as the gilets jaunes “yellow jacket” movement spilled across the border with France. The price of unleaded in Belgium is lower than in most major economies in western Europe, although diesel costs are higher than in surrounding nations.