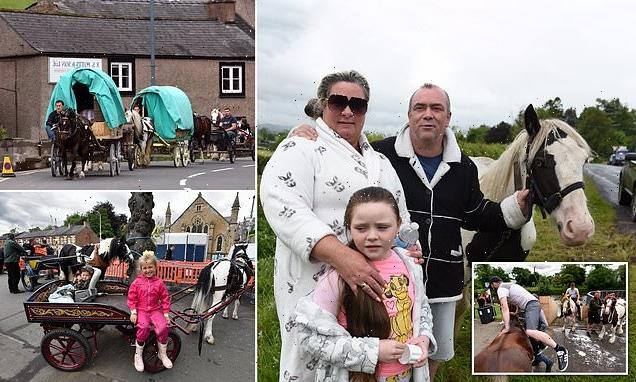 All the fun of the fair! Appleby horse fair gets under way as travellers from across Europe for traditional 250-year-old gathering’s first day tomorrow

The 250-year-old Appleby horse fair is about to get underway as travellers from across Europe head to the gathering’s first day tomorrow.

Also known as the ‘New Fair’, it began in 1775 for sheep and cattle drovers and horse dealers to sell their stock.

It is expected to see 30,000 visitors, with 10,000 of them from the gypsy, Roma and traveller community, head to the event in Appleby and neighbouring Kirkby.

In the run up to the fair, Cumbria Police is urging motorists to drive cautiously in the area and told the public to report any concerns they might have when it starts tomorrow.

The force said it has made arrests for theft and drug driving and been called to the scene of a crash where a horse died and three people were injured before the fair started.

Locals in Kirkby Stephen are also furious after the town’s Grade ll-listed war memorial in the market square was left strewn with drink and takeaway containers yesterday. 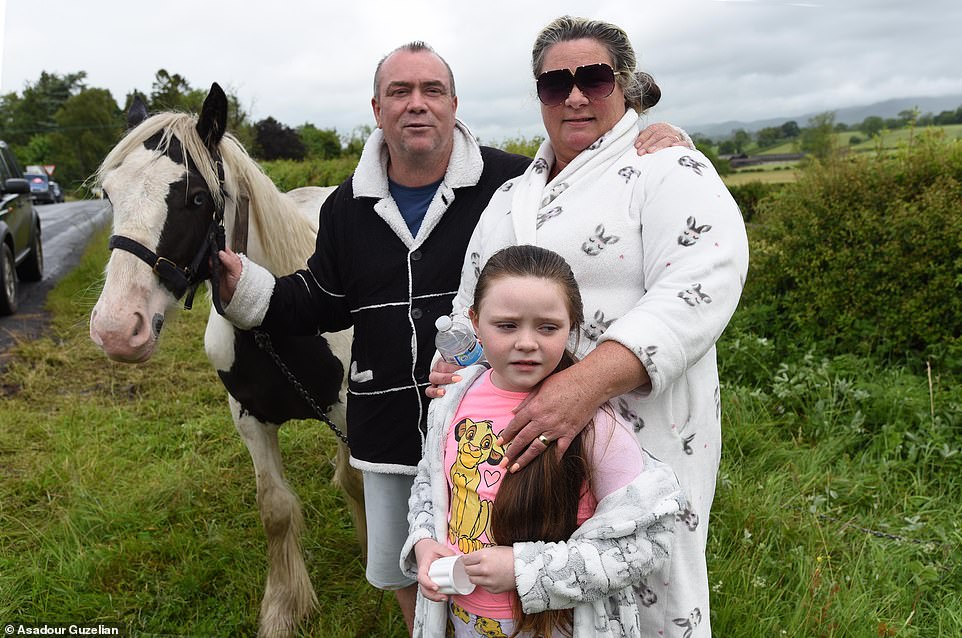 Ann and Bernard Ward with their daughter Angel and their horse Star on the outskirts of Appleby, Cumbria after arriving for the Appleby Horse Fair which begins tomorrow 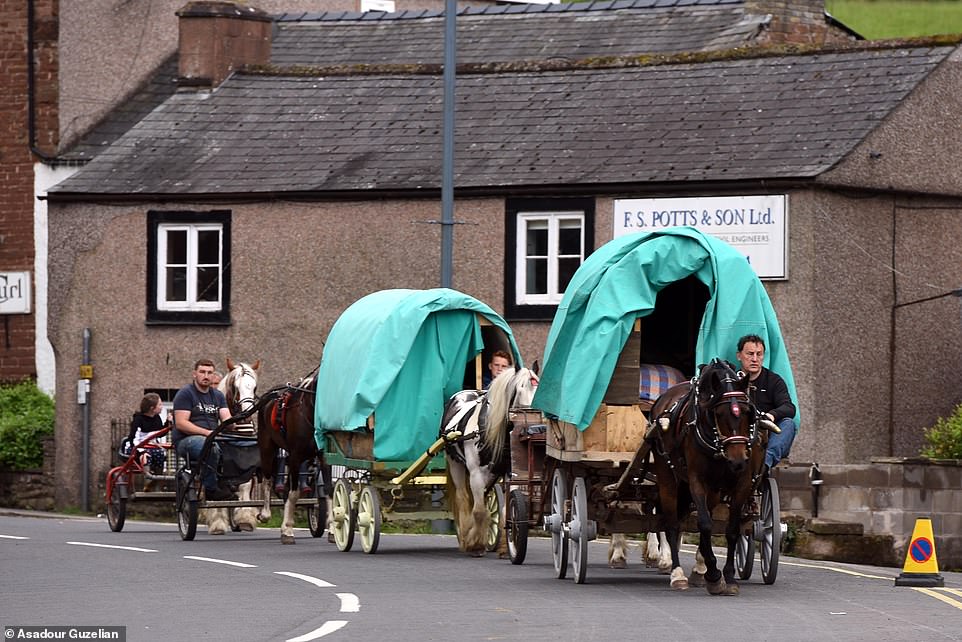 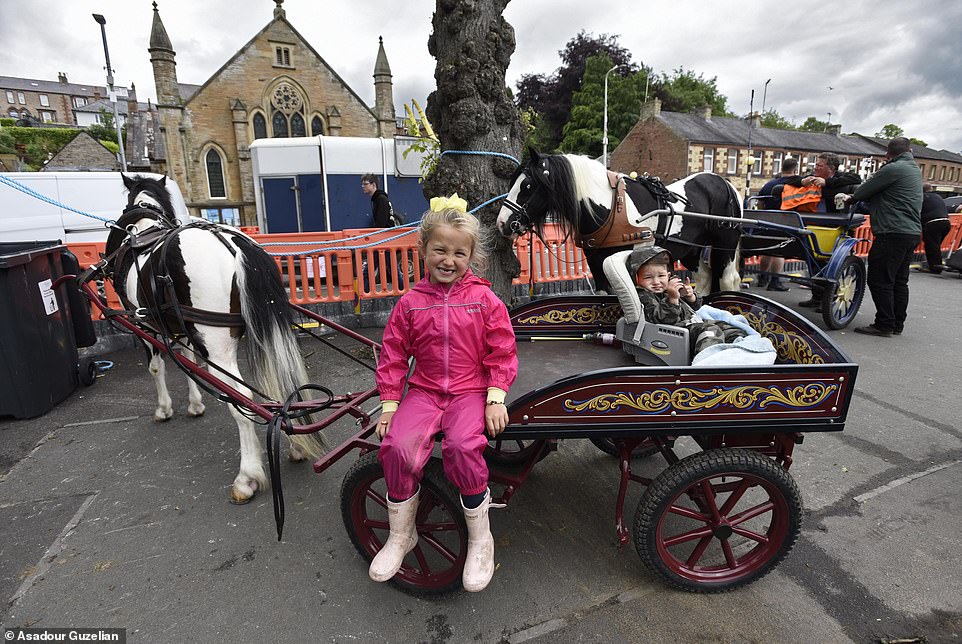 Vienna and Cassius, from Singleton, Lancashire with their family’s horse and trap by the River Eden today 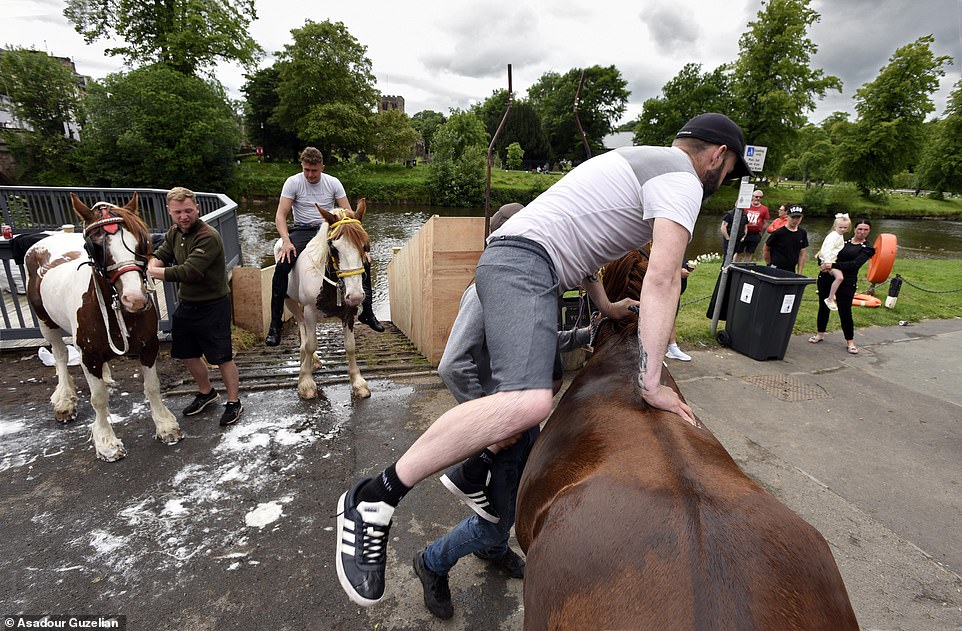 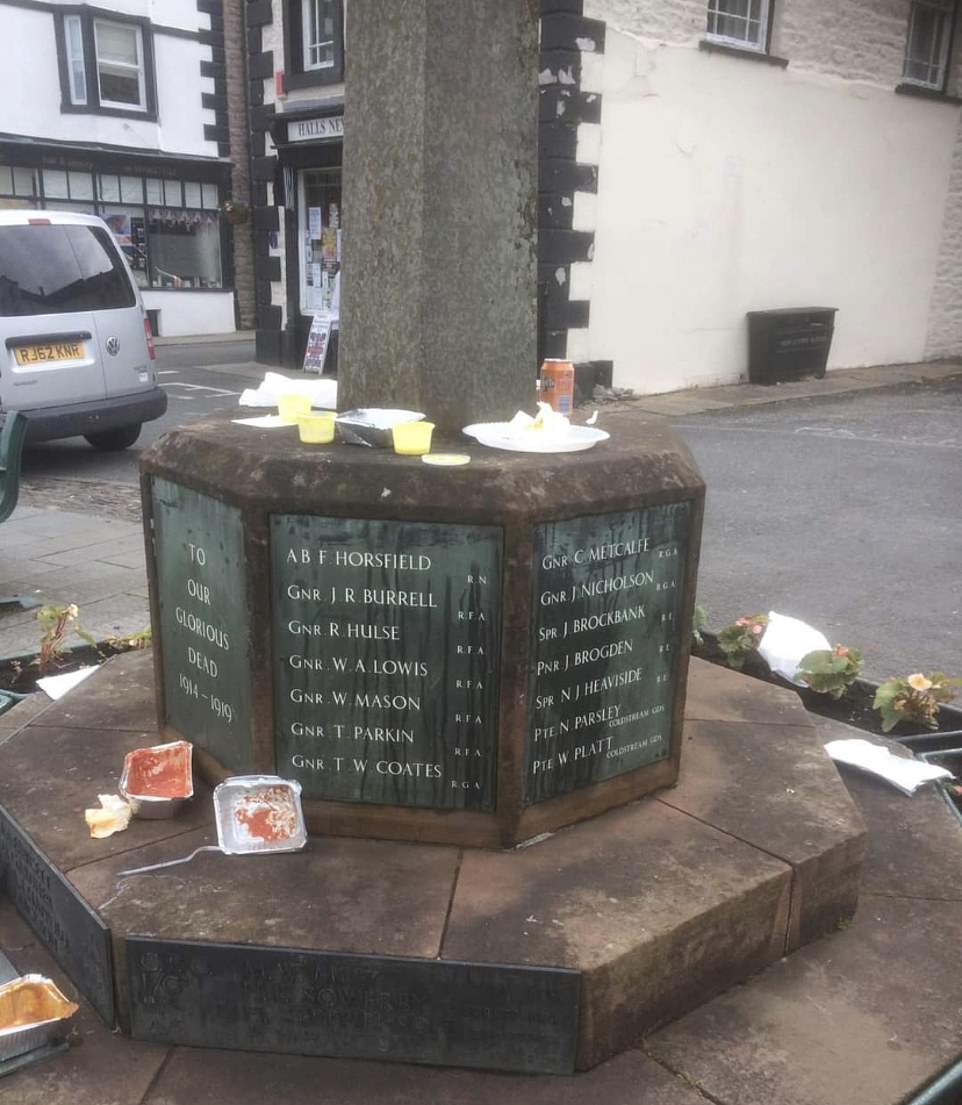 Locals in Kirkby Stephen are furious after the town’s Grade ll-listed war memorial was left strewn with drink and takeaway containers, prompting accusations of ‘desecration’.  There’s no suggestion that anyone pictured was involved, and it is not known whether travellers were responsible either for the litter 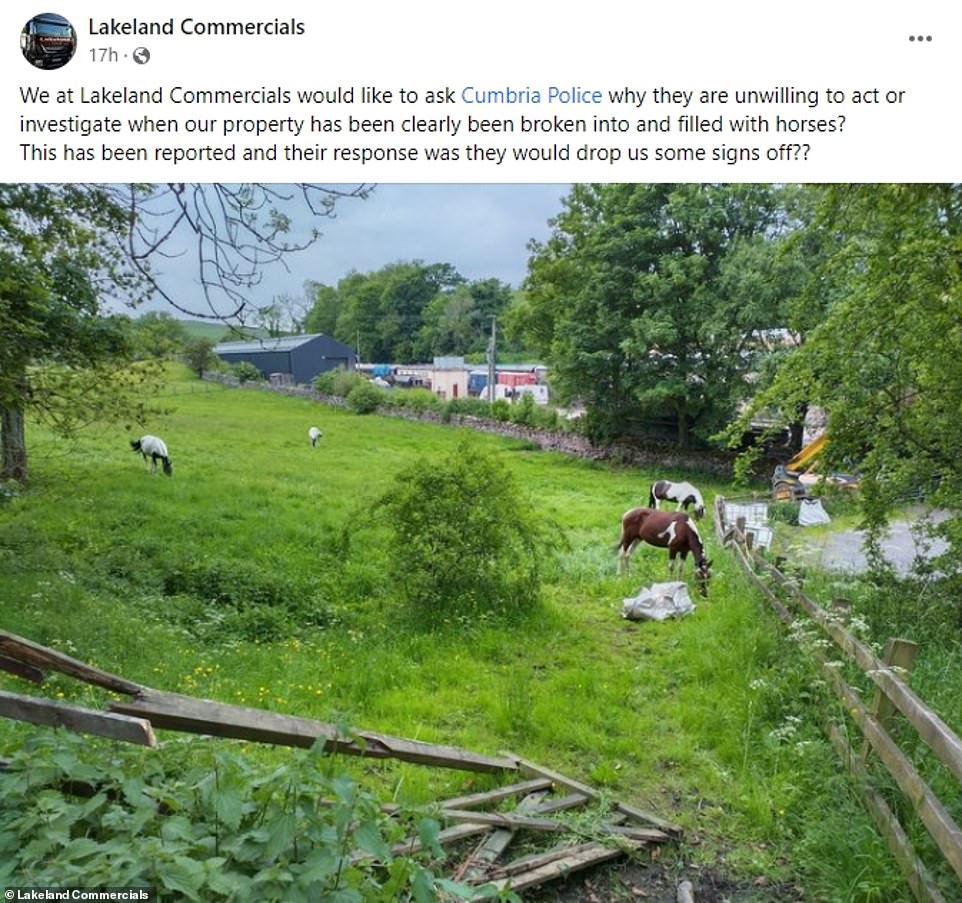 A haulage firm called Lakeland Commercials claimed a field it owns was broken into and a wooden gate damaged so that horses could be grazed on it. There’s no suggestion that anyone pictured was involved, and it is not known whether travellers were responsible either for the alleged break-in to the field

A unnamed local businessman said: ‘Travellers have desecrated the World War One memorial in Kirkby Stephen.

Appleby Horse Fair: Historic event tracing its roots back to 1685

The fair is held outside the town of Appleby, at the point where the old Roman Road crosses Long Marton Road, on Gallows Hill, which was named after the public hangings that were once carried out there.

It was once thought the fair originated from a royal charter to the borough of Appleby from King James II of England in 1685, although more recent research has found the charter was cancelled before it was ever enacted.

The gathering is sometimes known as ‘the New Fair’ because Appleby’s medieval borough fair, held at Whitsuntide, ceased in 1885.

The ‘New Fair’ began in 1775 for sheep and cattle drovers and horse dealers to sell their stock.

By the 1900s it had evolved into a major Gypsy/Traveller event which brought families from across the UK and Europe.

Cumbrians are being warned of horses and carts in the area.

Chief Superintendent Matt Kennerley, Gold Commander for Appleby Horse Fair, said: ‘At this time of year we always urge drivers to be particularly careful on the county’s roads.

‘The likelihood of encountering slow-moving traffic is high so we must all be attentive behind the wheel.

‘I urge people to take particular care on the A66, where fast-moving vehicles can come across slow-moving, often horse-drawn, vehicles and also the A685 in the vicinity of Kirkby Stephen, where there are caravans and horses by the side of the road. Whilst we already have large numbers of officers in these areas, we have further increased our resourcing here, to reassure people and help keep everyone safe.

‘By being aware of the potential dangers, we can all do our part to make sure everyone reaches their destination safely and without incident.’

Meanwhile, a haulage firm also claimed yesterday that a field it owns was broken into and a wooden gate damaged so that horses could be grazed on it.

While locals claim that it was travellers who left the litter on the memorial, this is not certain and no proof has been provided.

‘Many of us in the town have relatives commemorated on it and it has gone down very badly. Despite raised police patrols no one has been apprehended.

‘A field owned by a local business has also been broken into and numerous horses were let loose for some free grazing.’

The haulage company, Lakeland Commercials, posted a picture of the horses on their land yesterday and said: ‘We would like to ask Cumbria Police why they are unwilling to act or investigate when our property has been clearly been broken into and filled with horses?

‘This has been reported and their response was they would drop us some signs off.’

The event – Europe’s largest gathering of gypsies and travellers – is set to start tomorrow, a week later than usual to avoid clashing with the Queen’s Platinum Jubilee celebrations. 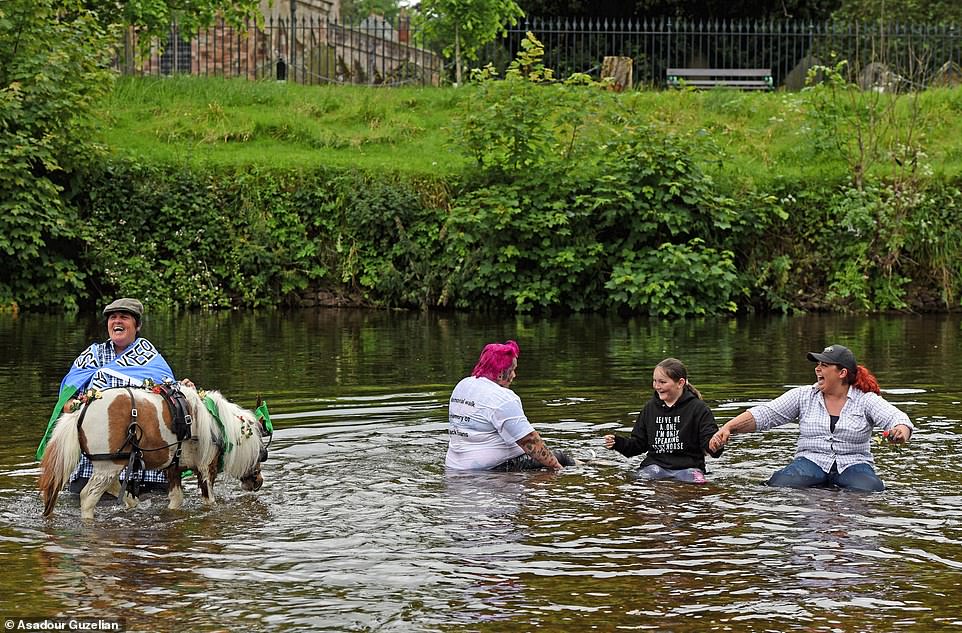 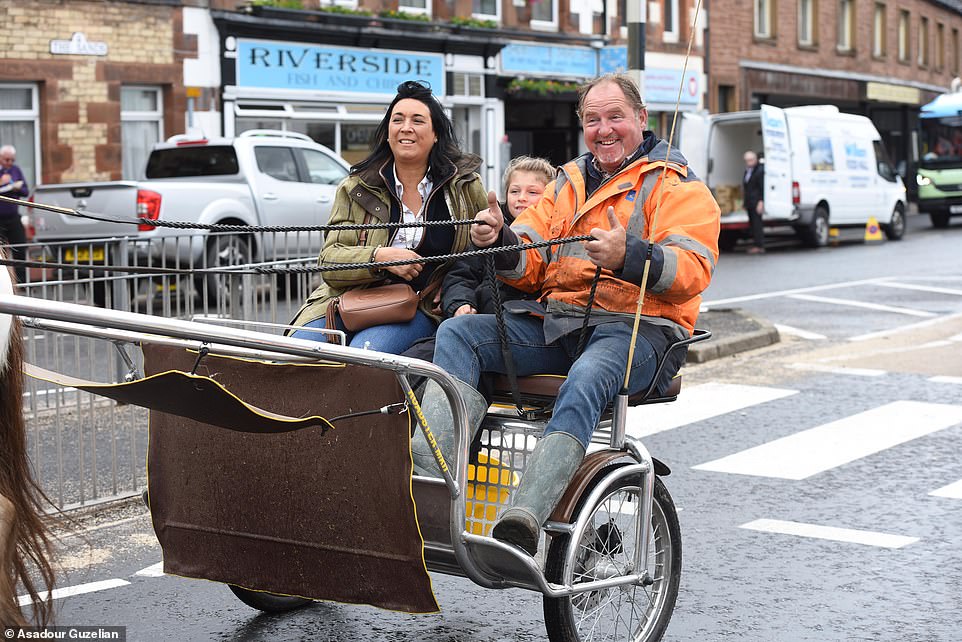 This year police have made changes to traffic regulations so local roads can be opened and closed when needed.

The number of temporary toilets has also been increased, and there will be daily meetings of the fair’s co-ordinating group.

In its 250-year history the fair has only been cancelled twice, the first in 2001 during the foot and mouth outbreak and the second in 2020 due to the pandemic.

The gathering is billed as the biggest traditional gypsy fair in Europe and has developed traditions that take place every year.

Gypsy horses are washed in the River Eden in Appleby and trotted up and down the ‘flashing lane’ – a closed off rural road – before being haggled over and bought.

There is a market on Jimmy Winter’s Field with stalls selling everything from fashion to horse-related wares. 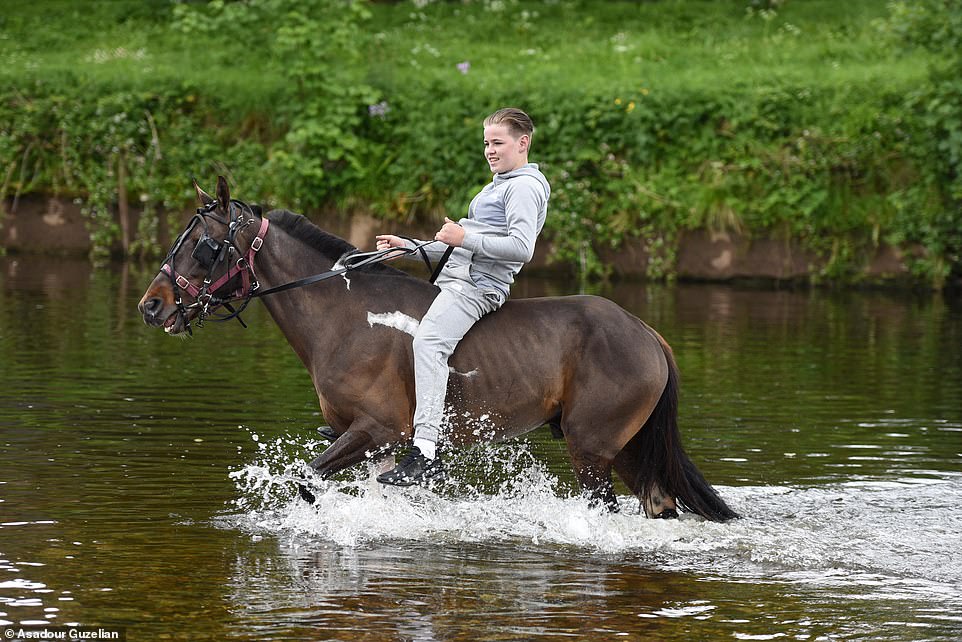 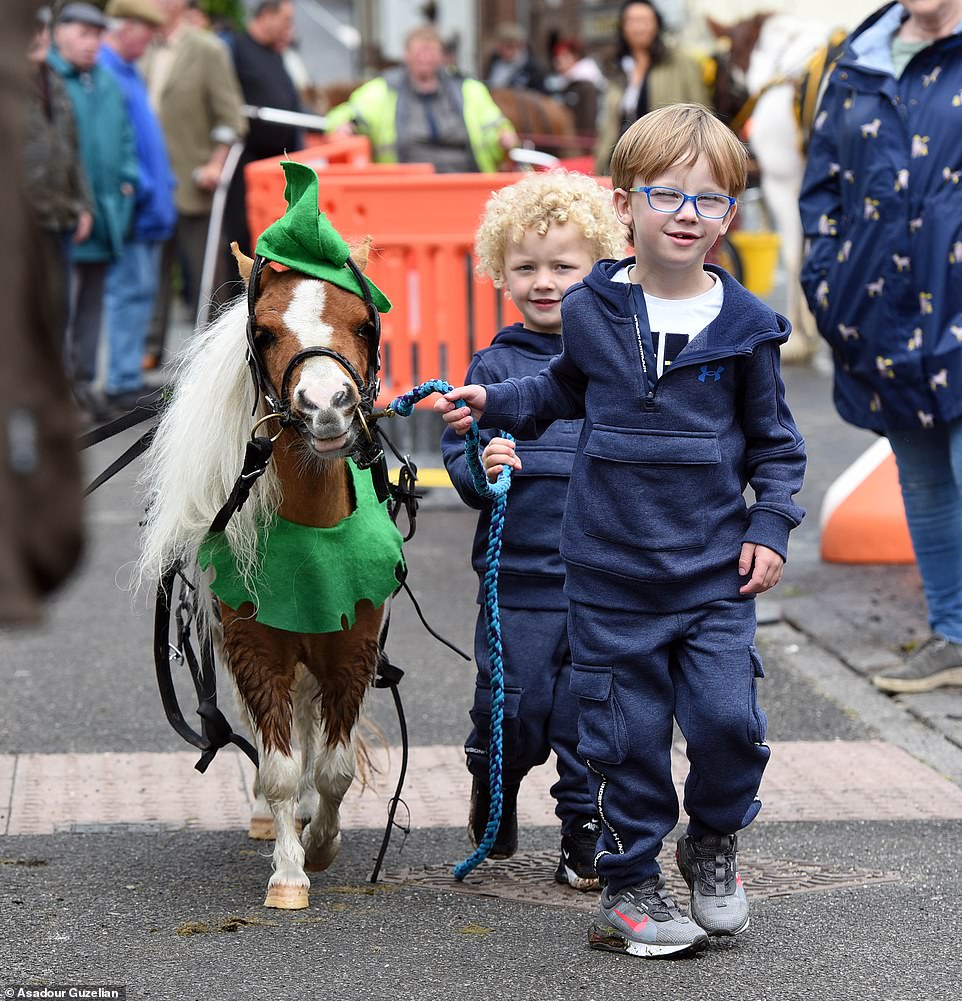 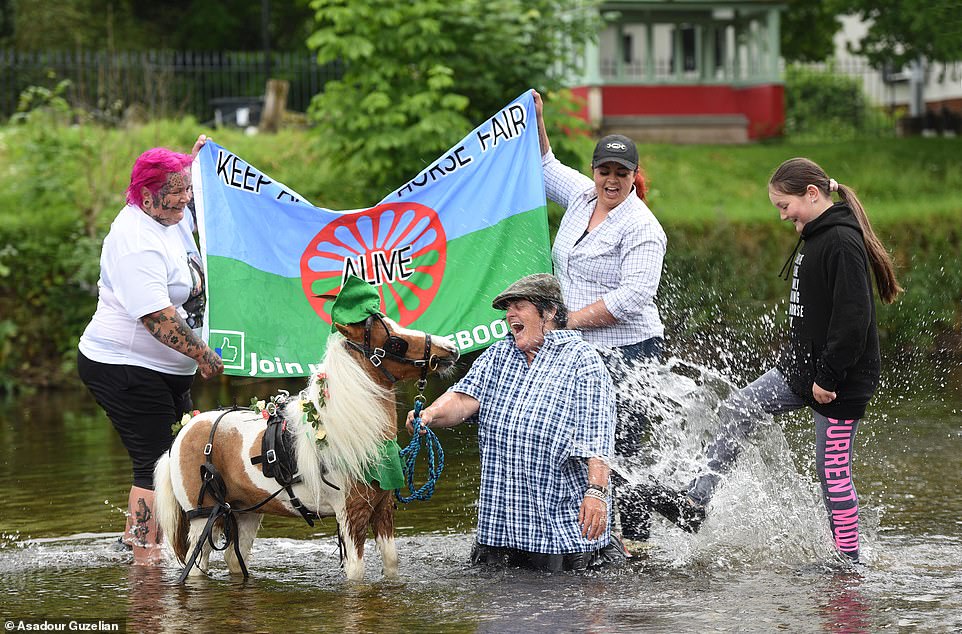 On Saturday afternoon, goods worth around £300 were reported stolen to police from Sainsburys in Penrith.

Officers responded and traced a Land Rover suspected as being used by those involved, which was then stopped in Long Marton Road in Appleby.

A 32-year-old woman from the Poole area was reported for shoplifting and the Land Rover was seized whilst officers investigate whether the vehicle is legally owned or has been stolen.

Yesterday evening, officers also stopped a car on Appleby bypass, driven by a man in his 20s from Penrith. He was found to be over the proscribed limit for drugs and arrested for drug driving and released under investigation.

Ch Supt Kennerley said: ‘Our officers are currently in the community and are proactively working to keep people safe, including making arrests.

‘As always, in the run-up to the Fair people will see a lot of officers on the ground in key locations, particularly the A685 at Kirkby Stephen and Appleby itself.

‘We proactively encourage the public to report concerns to ourselves and partners so that they can be addressed promptly and before they become larger issues.

‘Please report any police matters immediately, either direct to an officer or via our online and phone reporting mechanisms.’ 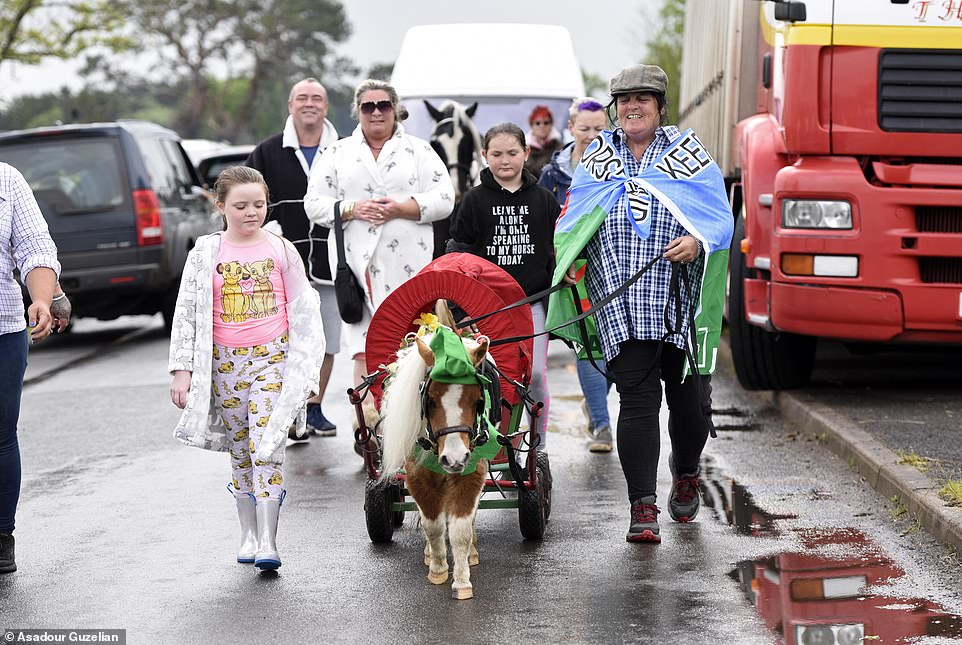 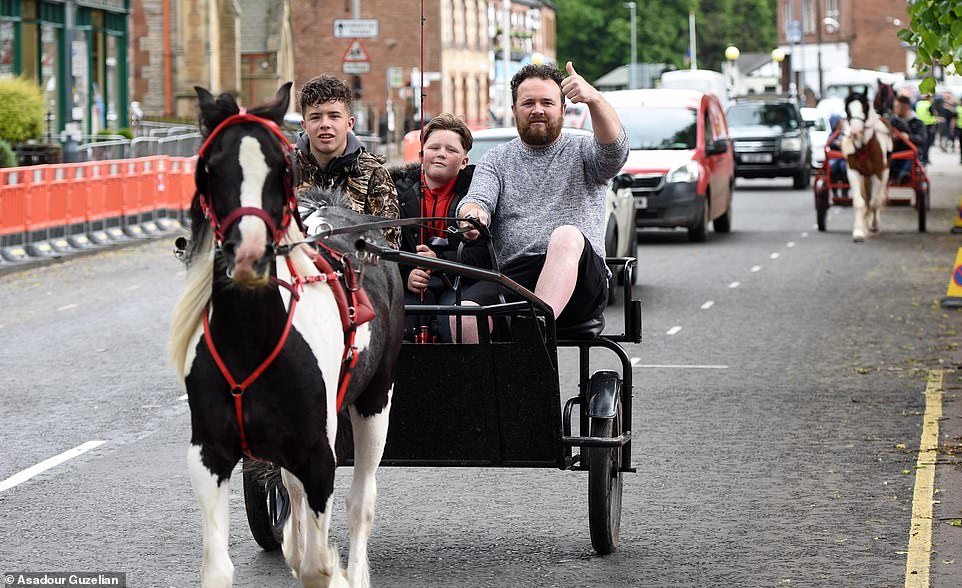 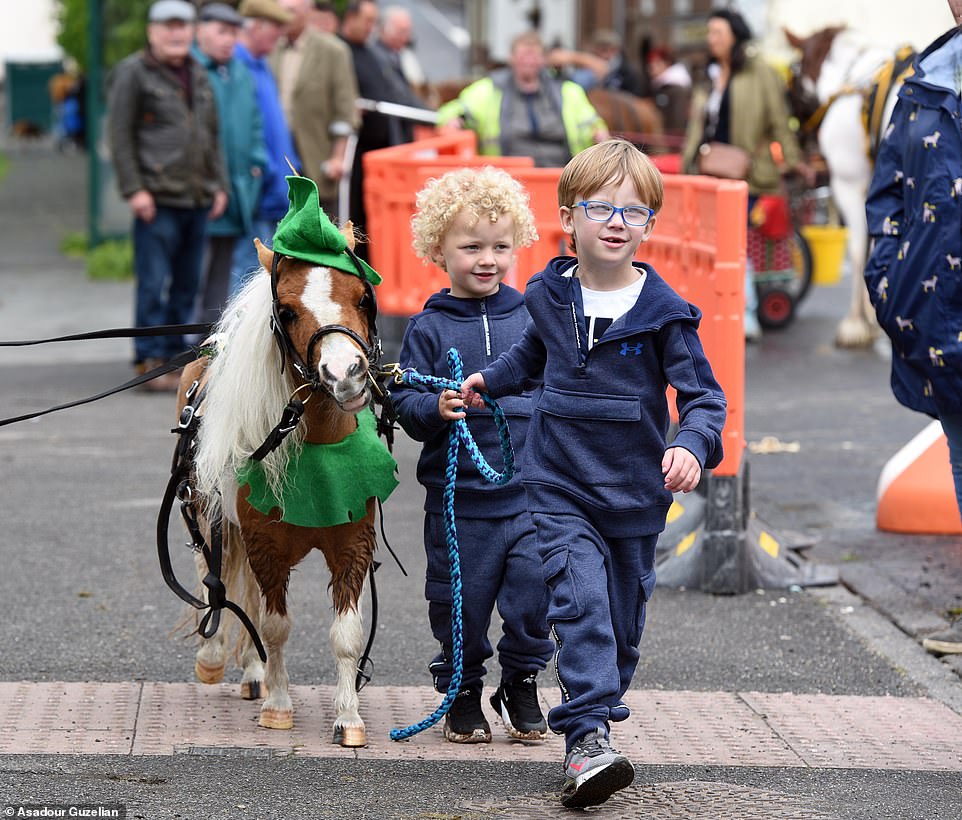 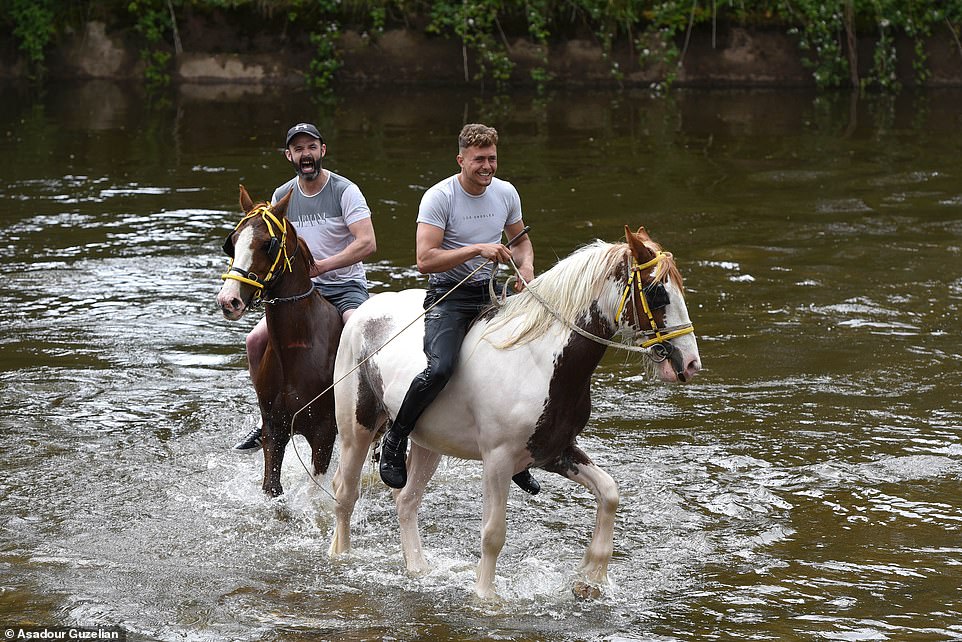 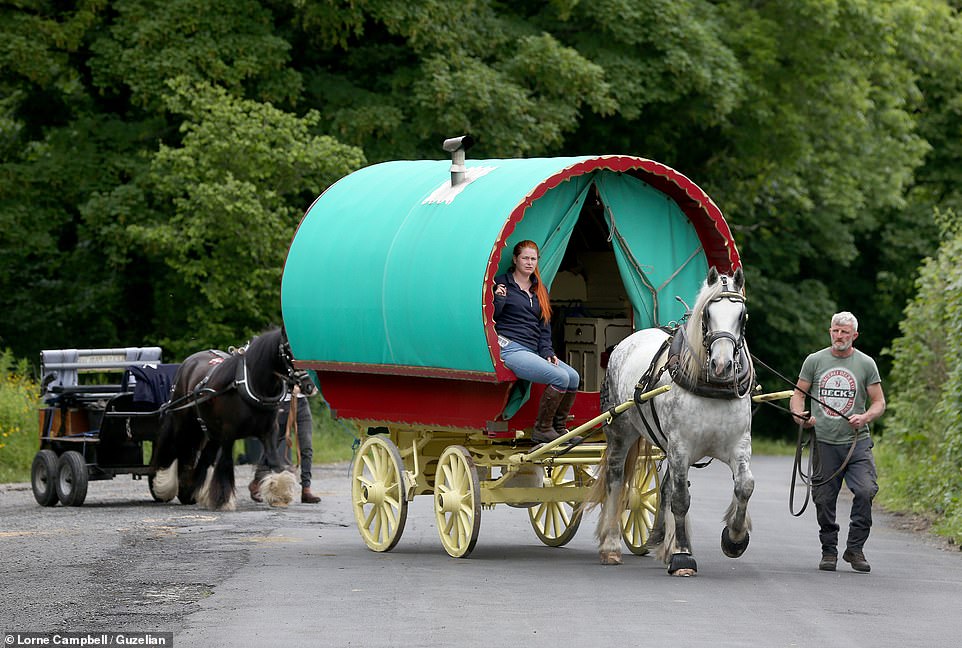 People at Barton in Cumbria on their way to the Appleby Horse Fair on Monday. There is no suggestion that those pictured were involved in the damage to the memorial or field

Last year there were claims of a sexual assault on a young woman in the grounds of a church and a local man in his 60s was taken to hospital after being assaulted.

There were scenes of chaos as fighting broke out on the main street between rival groups of travellers which brought armed police into the streets to restore order.

‘The police and partners work closely with the local community in Kirkby Stephen and the Gypsy and Traveller community in the lead-up to Appleby Horse Fair in an effort to address issues as they arise.

According to the Northern Echo, a horse died and people were injured after a bow top van pulled by two horses; a box van and a pickup truck crashed at North Stainmore near Cumbria and Durham.

Three injured people in the bow top were hospitalised but have since been able to leave the hospital. 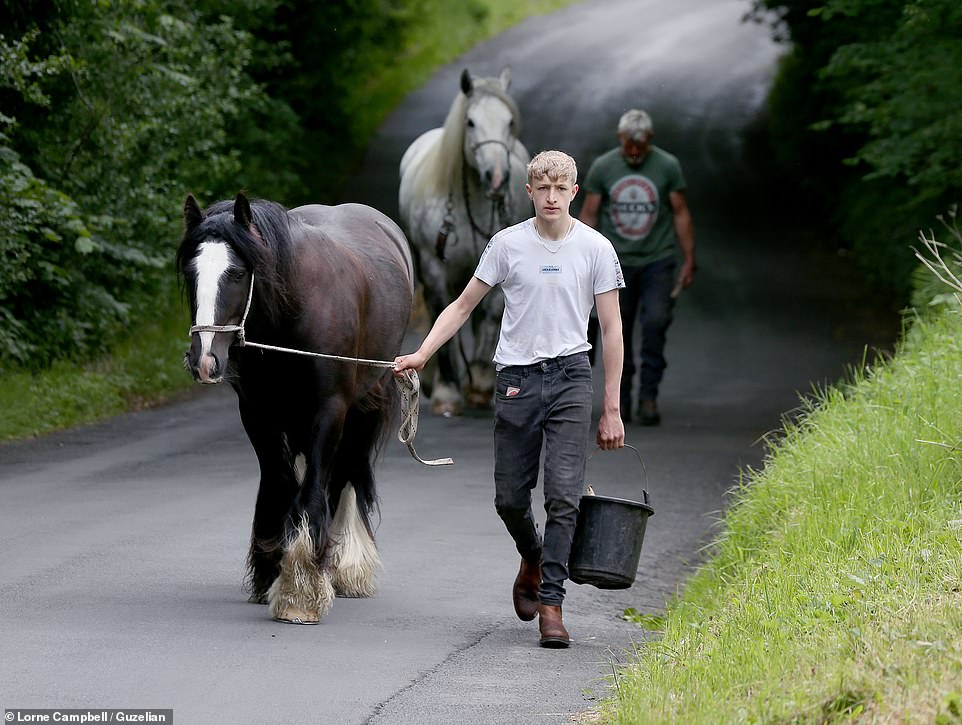 People on Monday on their way to the Appleby Horse Fair, at Barton in Cumbria. There is no suggestion that those pictured were involved in the damage to the memorial or field

‘People are urged to report matters to the police so they can be acted upon. Issues can be reported to officers in-person to officers based in Kirkby Stephen, online at www.cumbria.police.uk/reportit or by dialling 101.

Regarding the incident related to the Lakeland Commercials land, the police spokesman added: ‘We received a report yesterday at around 4.30pm of a wooden gate having been damaged and horses in the field. Officers attended. The horses had been moved on by around 7pm.

‘However, the incident is being investigated and police would ask anyone with information to report online at www.cumbria.police.uk/reportit, quoting incident number 167 of 7 June 2022. You can also phone on 101.