Home » World News » ‘An amazing way of life’: Push to lure permanent residents to the Grampians

‘An amazing way of life’: Push to lure permanent residents to the Grampians

With its ancient rock formations and rising mountains, the Grampians is among Victoria’s most loved tourism destinations attracting a growing number of visitors.

Every year bushwalkers, mountain bikers, rock climbers and holidaymakers flock to the region drawn by the allure of its natural beauty.

But luring permanent residents has proven much more difficult. And while the tourism sector has generated plenty of demand for services, local businesses say they cannot find staff to fill job vacancies. 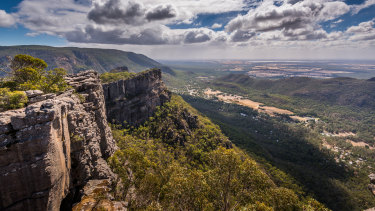 The Grampians is attracting an increasing number of tourists but not permanent residents. Credit:iStockphoto

According to the Grampians Regional Tourism Board the region had 2.5 million visitors in the 12 months to December last year, including international and overnight visitors and day-trippers. Yet the permanent population has largely remained stagnant.

Now four councils who cover the area and the tourism board are launching a campaign to entice new residents and help fill the job vacancies.

They hope to seize the moment presented by the coronavirus pandemic with Melbourne’s strict lockdown prompting some city dwellers to consider a tree change.

They estimate the region has more than 250 jobs waiting to be filled across the North and South Grampians shires and Ararat and Horsham City councils. Over a 12-month period that figure grows to well over 1000 jobs. 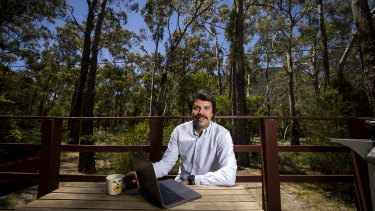 Kieran Ryan on the deck of his house in Halls Gap.

He bought a small house in Halls Gap after living in Richmond for five years. Mr Ryan, who grew up nearby in Stawell, moved to Halls Gap in March although he bought the house a year ago.

He occasionally returns to Melbourne for work where he manages corporate partnerships for men’s health charity Movember but hopes to spend most of his time at Halls Gap.

"I can’t see myself leaving in a hurry that’s for sure," he said. "It’s an amazing way of life in the Grampians. It’s slower. It’s easier to get to and from places."

Mr Ryan chose Halls Gap so he could be close to family but also indulge his passion for running in the mountains and cycling.

He said the coffee and food was on par with Melbourne standards with fewer queues during the week.

Paper Scissors Rock Brew Co co-owner Marty Schoo said there were five jobs available at his Halls Gap brewery and restaurant that could be filled immediately with the right applicants. He has lived in the Grampians region for 20 years.

"I don't recall there being so many jobs available and being so hard to fill in that time," he said.

Regional Australia Institute chief executive Kim Houghton said there were plenty of anecdotes from real estate agents of increasing sales in regional areas but little hard data to point to a trend.

"It is consistent. I think it actually is true," he said.

But Charles Sturt University economics professor John Hicks said Melburnians would need convincing to give up some benefits of city life.

"If you go and live in a country town and you don't drive a car you've got major problems getting around the regions," he said.

Professor Hicks said access to education, health care and entertainment would be major factors that may prove challenging in attracting city residents to regional Australia.

But Ararat Rural City Council mayor Jo Armstrong insisted many of those services including good health care and schools were available in the Grampians region.

She said the stunning views of the Grampians ranges, known as Gariwerd to its custodians, would help tempt people considering a move.

"I just have this amazing vista. It's always changing. The colour and light is different every time," she said. "It's just majestic."

Cr Armstrong said unemployment was only 2.4 per cent in Ararat and people could pursue careers in a range of industries from healthcare to manufacturing.

The median house price in the area was about $240,000 in Ararat making it far more affordable than Melbourne, she said.

Carlee Vokes moved to the area from the Barossa Valley about 10 years ago and is now manager at Paper Scissors Rock Brew Co.

She said finding work was easy. "I've never been without a job," Ms Vokes said.

She sees her future in Halls Gap.

"It's a beautiful area and a lovely community. There's something about the calming effect of the mountains that has a homely feel to it."