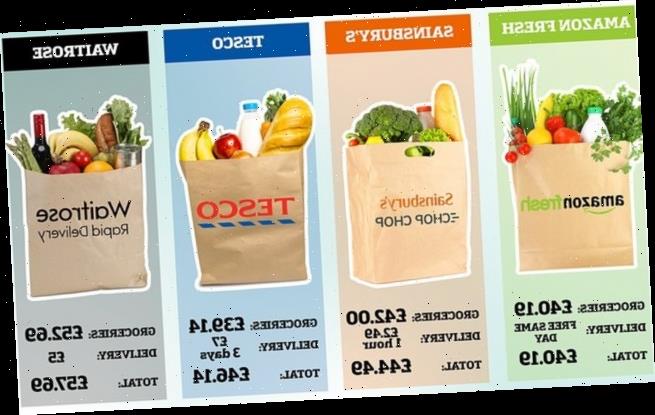 The dash to your doorstep: Amazon Fresh joins same-day delivery service for groceries with trial in south east of England – but how do prices compare?

Supermarkets were facing a fresh challenge today after online giant Amazon announced that Prime customers can now get their food shop delivered for free.

Shoppers using the £1.17billion company’s subscription service are now able to get groceries delivered straight to their door without leaving their sofas.

It replaces the previous system where Prime members – who already had to pay £7.99 – needed to pay an extra £2.99 for a food order.

Now, as long as customers are in London and the south-east – including Surrey, Hampshire, Hertfordshire and Bedfordshire – and spend more than £40 on Fresh orders they will get their groceries delivered free. 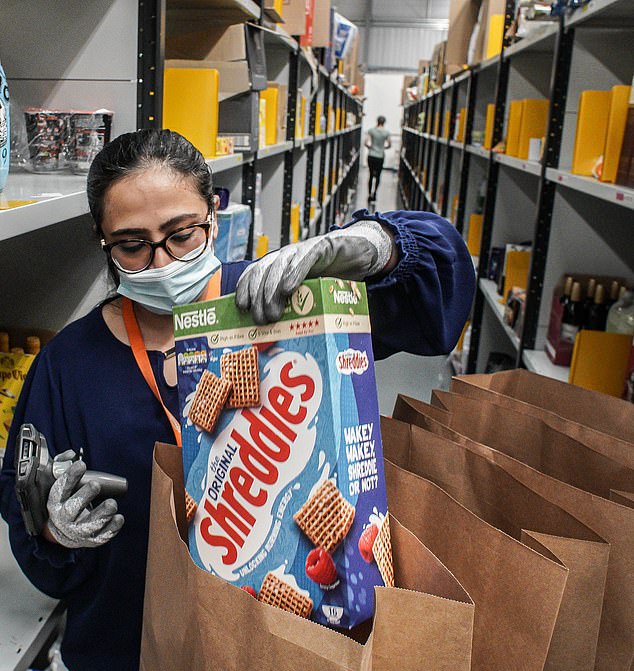 What is Amazon Fresh?

Amazon Fresh is an Amazon Prime benefit available at no extra cost to existing Prime subscribers.

Prime members in around 300 postcodes across Greater London and the South East (including London, Surrey, Hampshire, Hertfordshire and Bedfordshire) can do their weekly shop on Amazon Fresh, with local produce, brands and artisan products, included in the cost of Prime membership.

Amazon said delivery in two-hour windows is now free on orders over £40 and the minimum order value has been lowered from £40 to £15.

Customers will be able to access between 12,000 and 15,000 products online including products from retailers and brands including Booths, Morrisons, Whole Foods Market, Pepsi, Danone, Arla, Warburtons and Britvic.

Amazon Fresh customers will also be offered a selection of thousands of products from local producers including GAIL’s Artisan Bakery, C.Lidgate and Paxton & Whitfield.

The US e-commerce giant also plans to expand the free delivery to ‘millions more’ customers around the UK by the end of the year and speed up deliveries in a bid to capitalise on the booming online grocery industry.

It is understood that Prime customers in Birmingham, Manchester and Edinburgh will be among the first to benefit from the wider roll-out.

The huge push will see current warehouses – also called fulfillment centres – adapted and expanded to be able to safely store the food from suppliers before it is delivered to buyers,

It means suppliers, who include bakers and butchers, will have their goods transported to the hubs ready for Amazon to distribute themselves.

The same will happen with any supermarkets who decide to opt-in to the ambitious new system.

A spokesman for Amazon told MailOnline that Amazon Fresh will supply food from supermarkets Morrisons, Whole Foods Market, and Booths, as well as smaller suppliers including GAIL’s Artisan Bakery, C.Lidgate and Paxton & Whitfield.

But food from ‘nervous’ supermarkets including Tesco, Sainsbury’s and Asda will not be supplied as the US retailer looks to ‘capture a material slice’ of the market.

Shoppers in 40 postcodes in Surrey and Berkshire can also book a one-hour slot for £3.99 or get same-day delivery. 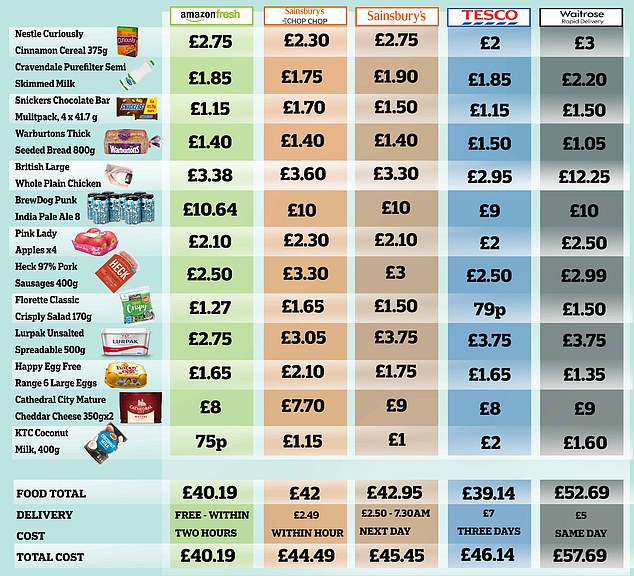 MailOnline compared an online food order Amazon Fresh to similar products from Sainsbury’s, Tesco and Waitrose, and found the online giant to be cheaper by more than £4 to nearest rival Sainsbury’s ‘Chop Chop’ 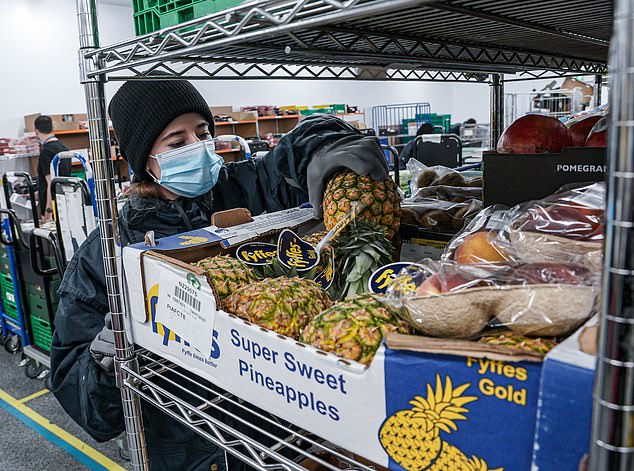 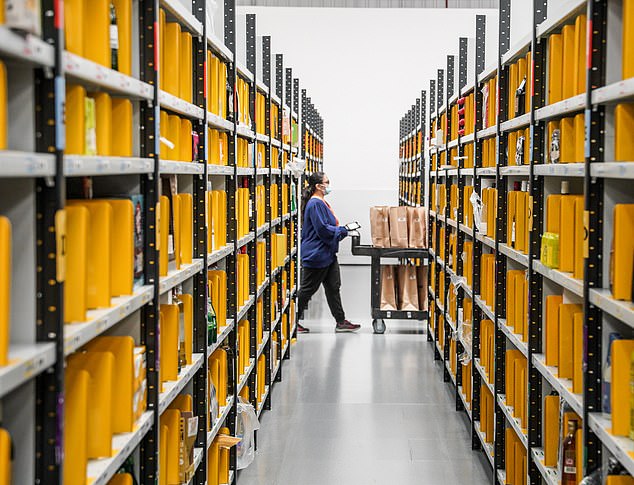 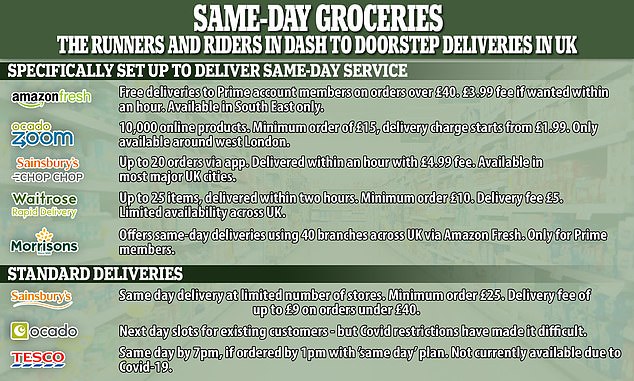 Retail analyst Richard Hyman called Amazon a ‘voraciously ambitious business that wants to dominate every market that it trades in’.

Speaking on BBC Radio 4’s Today programme, he added that UK supermarkets will be ‘rightly nervous’ as Amazon wades into the grocery market. 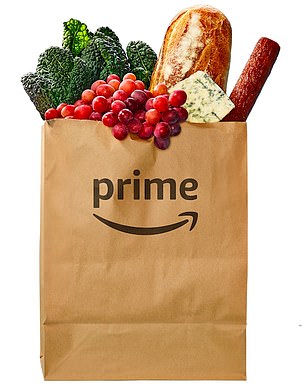 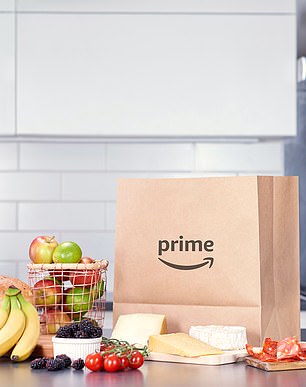 Amazon says customers using the delivery network will be able to pick between 12,000 and 15,000 products from a special section found on its website

Who are Amazon Fresh’s biggest rivals?

Ocado Zoom is Ocado’s on-demand service stocking a wide selection of ocado.com’s range. So if you want groceries delivered now, or later the same day, and you live in West London, then Ocado Zoom’s for you.

Zoom is only available to a limited number of postcodes from a small site in west London. They provide a choice of over 10,000 products with a minimum order £15 and a delivery charge that starts from £1.99.

Chop customers can order up to 20 items via an app for delivery by bike within 60 minutes for a flat delivery fee of £4.99. There is a minimum spend of £15 and the service is available in selected areas of Birmingham, Brighton, Bristol, Cambridge, Cardiff, Leeds, Liverpool, London, Manchester, Milton Keynes, Newcastle, Nottingham, Oxford, and Reading.

Customers can choose 25 items, delivery within two hours. There is a minimum £10 order with a £5 delivery fee in a select number of postcodes.

‘Now it’s not going to dominate the UK grocery market any time soon because there’s rather a lot of players in it already who are actually pretty good at what they do. But I think we shouldn’t be under any doubt that they will capture a material slice of this market.

‘It’s certainly true that when someone with the pockets that are as deep as Amazon enters the market and their existing retail business model doesn’t need to make any profit because they make their profit doing other things, that represents a potential challenge of significant dimensions.’

He added: ‘One of the things we’ve all learned about Amazon over the years is that they are very unconventional and they’re also extraordinarily secretive. So there’s a lot about this that they’ve not told us.’

Amazon release their second quarter results on Thursday. Investors who have seen the share price rise by around 60 per cent this year will be hoping for more good news from the technology giant. The surge in Amazon shares saw founder Jeff Bezos add £10billion to his wealth in just one day last week.

Food delivery has doubled in size to more than 3million orders per week since the start of the pandemic as families avoid crowded spaces and learn to shop online.

Traditional supermarkets have already seen their market share undercut by German discounters, which hold more than 13 per cent of the UK market, and sellers such as Ocado and Amazon post a threat online.

Russell Jones, UK country manager for Amazon Fresh, said: ‘It’s a really obvious next step to take. Grocery delivery is one of the fastest growing businesses at Amazon and we think this will be one of the most-loved Prime benefits in the UK.’

Tom Brereton, an analyst at Global Data, said: ‘It’s a bold and ambitious move from Amazon.’