Vote tallying began on Monday in a historic union election at an Amazon (AMZN) warehouse in Bessemer, Alabama, where a labor victory among more than 5,000 workers could upend the business model at the e-commerce giant and intensify a surge of organizing underway at major companies like Starbucks (SBUX) and Disney (DIS).

The election arrives roughly one year after the overwhelming defeat of an initial union drive led by the Retail, Wholesale and Department Store Union (RWDSU) at the Bessemer facility — a result that was later nullified by a ruling that Amazon had illegally interfered with the labor campaign.

Alongside the revote in Bessemer, warehouse workers at a 6,000-person facility on Staten Island are casting their ballots in a union election that ends on Wednesday.

Both elections could deliver results by the end of the week, with victories dealing a sudden and significant blow to Amazon, which has opposed the labor campaigns at both facilities. But twin union defeats could tarnish the perception of organizing at the company nationwide, discouraging workers beyond Amazon and affirming the company's previous contention that criticism of the work environment at its warehouses is overblown.

RWDSU President Stuart Appelbaum, as well as pro-union Amazon workers, told Yahoo Finance that a different strategy and a new set of grievances have energized the campaign, feeding optimism that the union will prevail in the second election at the plant.

Labor experts acknowledged the significance of a potential victory at the nation’s second-largest employer, especially among a predominantly Black segment of its workforce at a facility in the labor-unfriendly South.

Moreover, the election at Amazon coincides with a nationwide wave of organizing as emboldened workers draw leverage from a tight labor market. Starbucks workers in recent months have unionized eight stores, with more likely to come as over 100 stores across more than 25 states have filed for union elections; and employees at Disney captured attention last week with a walkout to protest the company's posture toward a controversial Florida law.

But the experts cautioned that the bottomless resources and anti-union messaging of a corporate giant like Amazon make the organizing drive a difficult feat.

The election is “symbolic because Amazon is sort of looked at as the wave of the future in terms of the business world, the globalized economy, and the high-tech economy,” says Paul Clark, a labor relations professor at Pennsylvania State University. “There was a great disappointment when the first vote was not even close, so this would be a big deal.”

In a statement to Yahoo Finance, Amazon said it eagerly awaits the results of the union election in Bessemer. “We look forward to having our employees’ voices heard,” spokesperson Kelly Nantel said. “Our focus remains on working directly with our team to continue making Amazon a great place to work.” 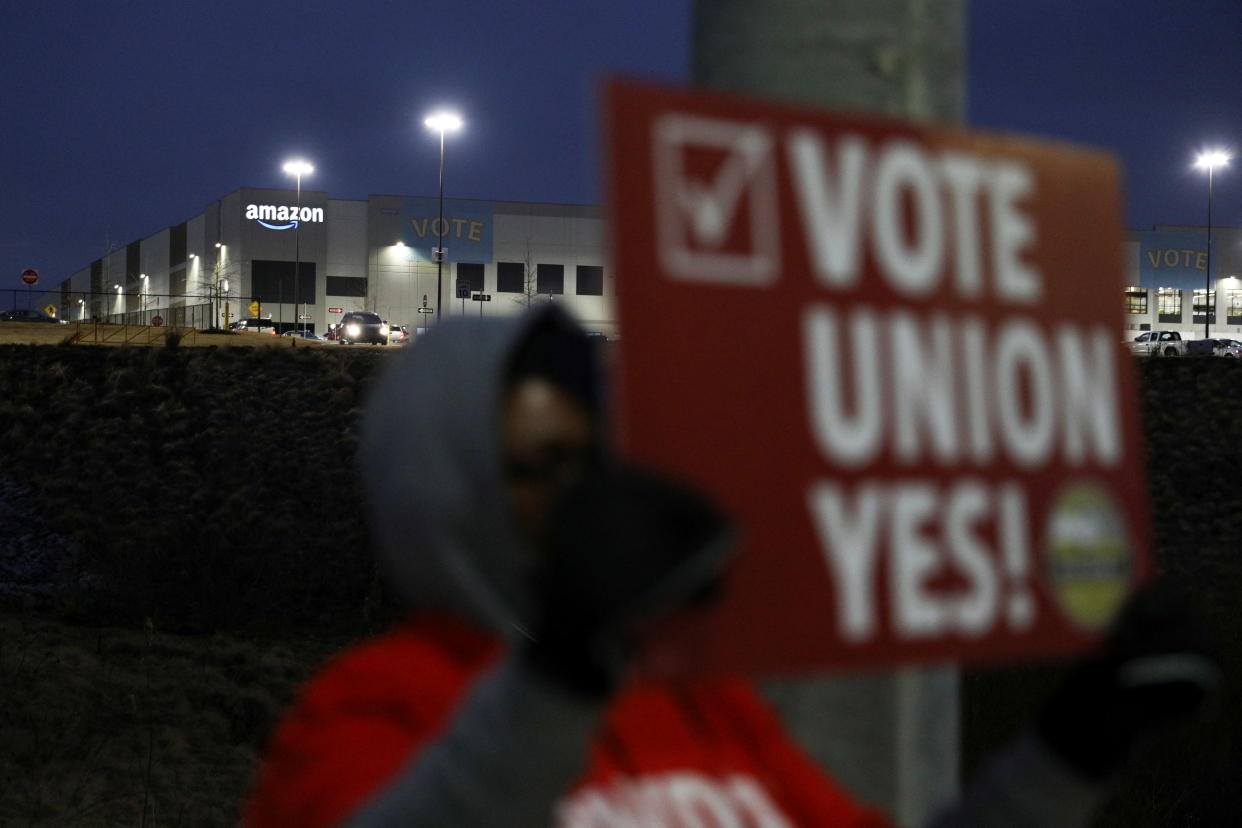 Dale Wyatt, a warehouse worker at the Bessemer facility since August, said he voted “yes” for the union because it would bring job security, a potential pay raise, and bolstered workplace safety protections.

The criticism echoes grievances voiced by Amazon workers for years, including during the previous organizing drive at the Bessemer facility, when workers said they endured grueling and dangerous conditions enforced by digital devices that track them every minute. Some workers also say these devices fuel high turnover as the company fires employees who fail to keep up with performance quotas.

Emergency calls from the facility in recent months suggest incidents of acute difficulty. Individuals at the Bessemer warehouse called 911 a total of 32 times over the first two months of 2022, amounting to a rate of more than one call every two days, according to a 911 call log obtained by Yahoo Finance through a public records request. The reasons for the calls included heart attacks, psychiatric problems, and fainting, the 911 log said.

"The facility has thousands of workers there, but that's still a lot of calls," says Joshua Freeman, a professor emeritus of labor history at Queens College at the City University of New York. "It clearly reflects some challenging conditions."

Amazon did not respond to a request for comment about the 911 calls.

Wyatt said the second union drive in Bessemer has also focused on a newfound disillusionment at the warehouse: a belief that the company has fallen short of a commitment to improve employee relations made during the first union drive last spring.

"I've noticed a lot of people who were voting ‘no’ last time are voting ‘yes’ this time because Amazon didn’t follow through on its promises from the last round," Wyatt said.

In a previous statement to Yahoo Finance, Amazon defended its commitment to workers' wellbeing and safety. "Nothing is more important than the health and safety of our employees," the company said. "We are anything but complacent and continue to innovate, learn, and improve the measures we have in place to protect our teams.”

A number of workers at the facility in Bessemer oppose the union drive, in part because they fear the loss of what they consider strong pay and benefits, BuzzFeed News reported last month. Full-time entry-level employees for the company in Alabama make nearly $16 per hour — a pay rate over twice the federal minimum wage.

“I'm very worried about what would happen should the union be voted in," Kylee Rancour, an Amazon warehouse worker in Bessemer, told BuzzFeed News. "It could mean sacrificing benefits in exchange for things we don't want or need."

Meanwhile, in advocating for the union, Wyatt has spoken with colleagues about it in the break room, helped hand out union-provided "goodie bags," and even made a homemade T-shirt that says, in part, "Your boss lied."

It's all part of a revamped union strategy that favors person-to-person conversations with workers. That contrasts with the organizing drive last year, which appeared to focus on attracting big-name supporters like President Joe Biden and Senator Bernie Sanders (I-VT).

“This is radically different from the first campaign," says Appelbaum, the RWDSU president.

He says the campaign has drawn support and in some cases personnel from 20 other unions, which allowed for up to 150 organizers on the ground in Bessemer at any given time. Among the partner unions are two of the nation's largest, the Service Employees International Union and the Teamsters, the latter of which launched its own nationwide campaign focused on Amazon last June. 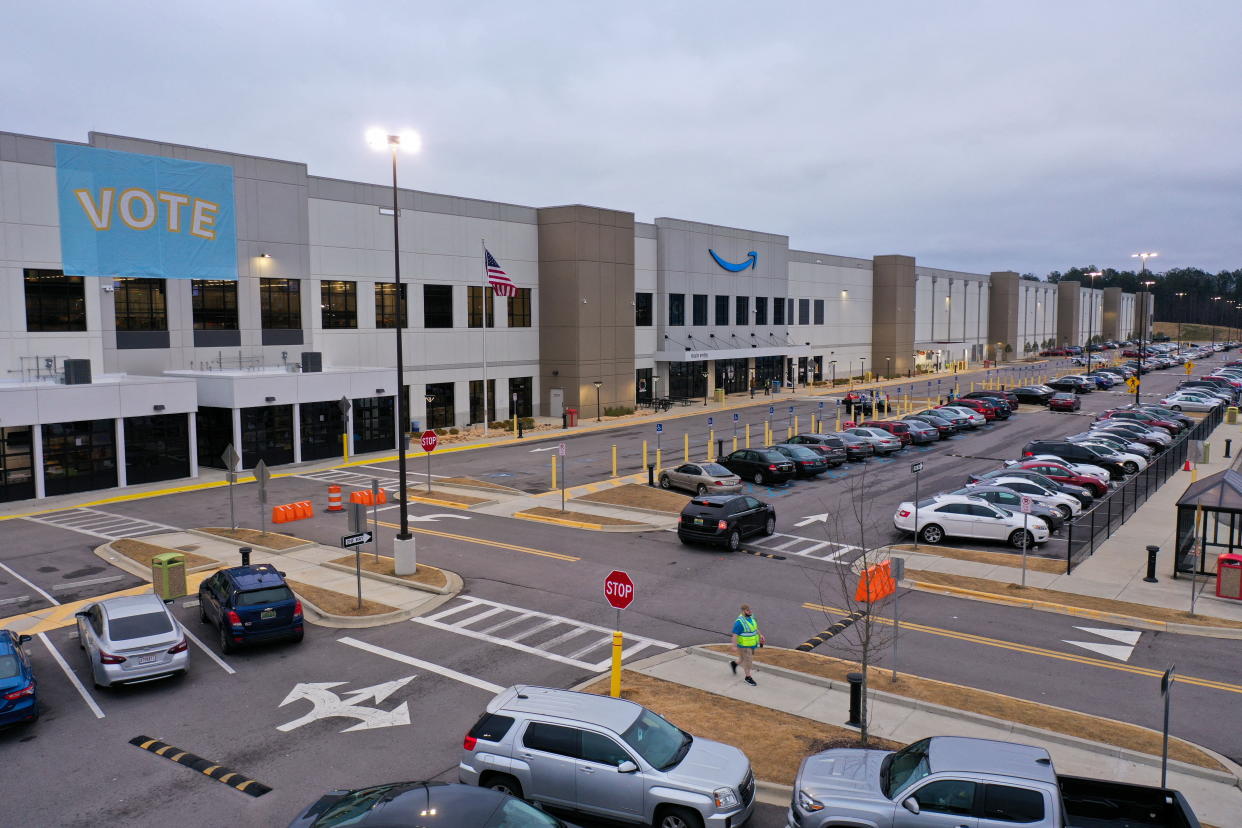 But the second organizing drive at Bessemer has faced a staunch and well-resourced anti-union campaign from Amazon, Wyatt and Appelbaum said. For his part, Wyatt estimated that he had been forced to attend at least 12 meetings in recent months during which Amazon attempted to persuade workers to oppose the union. Over the days leading up to mail-in voting, which began on Feb. 4, Wyatt received "daily messages" from Amazon urging him to vote "no," he said.

To be sure, federal labor law permits employers wide latitude in dissuading workers from supporting a labor drive, including mandatory meetings with employees.

“One thing that has stayed the same is Amazon has been conducting a ferocious union busting campaign, just as they did during the first vote," Appelbaum said.

Amazon previously provided the following statement to Yahoo Finance regarding other union campaigns among its employees: "It’s our employees’ choice whether or not to join a union. It always has been. And it’s important that everyone understands the facts about joining a union and the election process itself."

"We host regular information sessions for all employees, which includes an opportunity for them to ask questions," the statement continues. "If the union vote passes, it will impact everyone at the site so it’s important all employees understand what that means for them and their day-to-day life working at Amazon.”

Maite Tapia, a labor expert at Michigan State University, noted that the anti-union tactics carried out by Amazon comprise the standard response to unionization from many large employers, including Starbucks, another major brand publicly opposing an organizing effort undertaken by its workers.

"I’m hopeful, but at the same time, they fight against corporations that have bottomless pockets when it comes to anti-union campaigning," she says.

In the Bessemer warehouse, workers' conditions are inextricably linked to issues of race, surveillance, and policing, as about 80% of the warehouse’s workforce is Black, said Tamara Lee, a labor expert at Rutgers University who often collaborates with Tapia.

Amazon says that the tracking devices allow the company to enhance the safety and efficiency of the workplace. “Like any business, we use technology to maintain a level of security within our operations to help keep our employees, buildings, and inventory safe — it would be irresponsible if we didn’t do so,” the company told the Washington Post in December.

“It’s also important to note that while the technology helps keep our employees safe, it also allows them to be more efficient in their jobs," the company added.

Lee pointed to the negative ramifications of rigorously tracking worker performance. “With this kind of nonstop surveillance, it’s a form of bodily control, inside and outside the workplace, especially Black bodies that make up the majority of the workforce in Bessemer,” she said.

"It's very significant that this is happening now, and that it’s happening in the South, but I don’t want to overplay this moment," she adds. "Workers have been frustrated at Amazon for years, and they’ve made other attempts to organize.”

For years, Amazon has withstood persistent criticism over the conditions at its warehouse network, which has grown to at least 110 fulfillment centers in North America. The company instituted a $15 wage floor four years ago, and last year backed legislation that would gradually raise the federal minimum wage from $7.25 to $15 per hour. Other companies like Ben & Jerry's and Patagonia are among the firms that support a $15 minimum wage.

But national interest in the first Bessemer union drive spurred more than 1,000 Amazon employees across the U.S. to contact RWDSU about potential labor organizing efforts, the union said last March.

Natalie Monarrez, a warehouse worker at a Staten Island facility that's in a union drive of its own, said she hopes the second election in Bessemer brings a sea change in worker relations at the company and other major firms.

"Jeff Bezos already had 27 years to figure it out and it was an afterthought for him," she says referring to the founder and former CEO who still chairs the board. "He should've considered his workers even a fraction as much as he’s been obsessed with his customers."

"We were inspired by them to unionize and hopefully other locations and workers at other companies will be inspired," she adds.