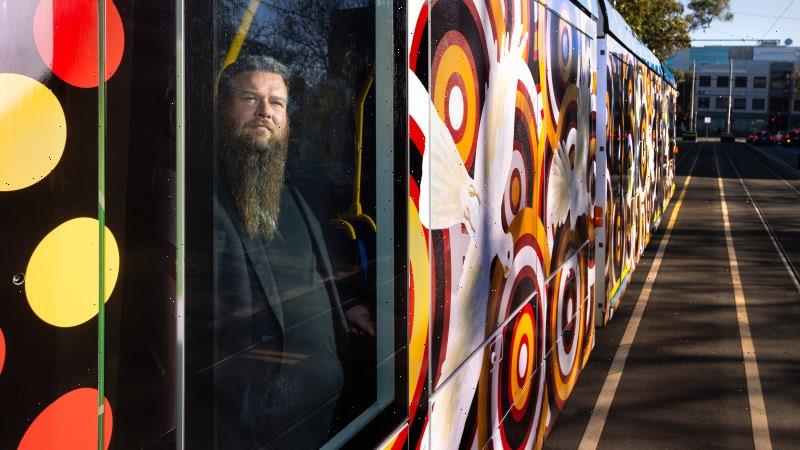 Tiriki Onus remembers the weekends he spent as a 10-year-old helping his father, the Yorta Yorta artist and activist Lin Onus, paint his first art tram and then seeing it rattle along Melbourne’s streets.

“It was 1991 – you still didn’t see a lot of Aboriginal and Torres Strait Islander imagery around and lot of our stories weren’t told,” said Tiriki. “It was a bold statement.” 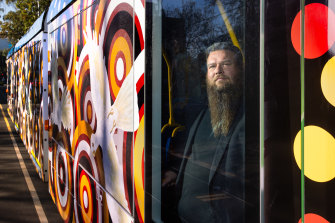 “I love taking it out here and putting it on the streets”: Tiriki Onus, inside the new art tram reproducing his father’s 1991 original work. Credit:Simon Schluter

That mobile statement returned to Melbourne’s streets on Tuesday, with the unveiling of the first of six new Melbourne Art Trams presented as part of the RISING arts festival.

Lin died in 1996 and the festival has worked with Tiriki – an opera singer and artist in his own right – to reimagine his father’s original work on the side of the C-class tram, which will operate on routes 109 and 48 for the next 12 months.

Tiriki said Melbourne’s Indigenous community felt a sense of collective ownership over his father’s first tram, with stories of young Aboriginal kids jumping on board without a ticket because it was “clear it was their tram, and they could go anywhere they wanted on it”.

“Perhaps more excitingly, now, there are a huge number of people who I think are going to feel more empowered to engage with this story, not just Aboriginal Torres Strait Islander but people from all walks of life,” he said. 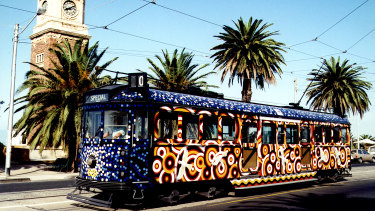 The tram painted in 1991 by Yorta Yorta artist and activist Lin Onus.

“I love taking it out here and putting it on the streets. Art should be something joyous that we all engage with, on a day-to-day basis, particularly in a three-dimensional format like a tram.”

Tiriki said it was an extraordinary gift to put his father’s artwork back on the tracks. He was stunned to learn the original had been preserved at a depot for decommissioned trams at Newport.

Digital manipulation was used to redesign the artwork and print it onto the longer C-class tram. Tiriki said the process with curator Jarra Karalinar Steel captured the vital elements of Lin’s design and created as close to a faithful reproduction of the design as possible.

Six trams will be rolled out in the next two weeks as part of the RISING art trams program, each by a First Nations artist responding to the theme “Unapologetically Blak”:

RISING co-artistic director Hannah Fox said she couldn’t think of anything “more authentically connected to this place than first people’s art and stories on a Melbourne tram”.

The six trams painted by Louise Moore, Patricia Mckean, Dr Paola Balla, Tegan Murdock and Darcy McConnell, who also makes art under the name Enoki, will operate on Melbourne’s tram network for the next 12 months.

Your essential guide to the best things to see and do in and around the city. Sign up to our Culture Fix newsletter here.