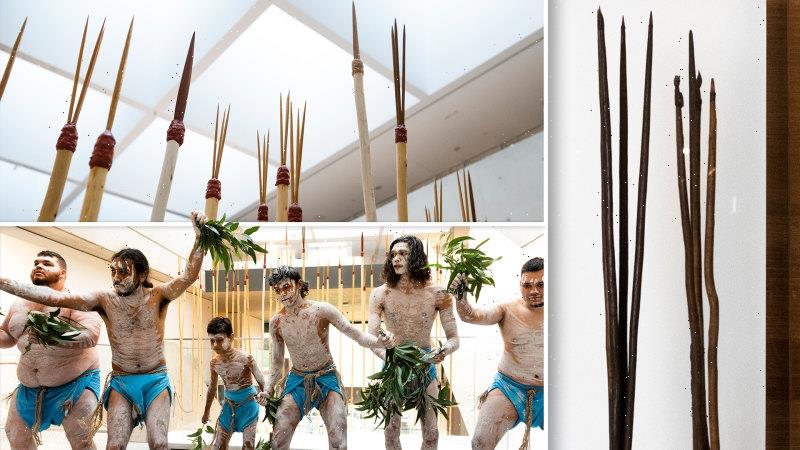 They are the oldest Indigenous artefacts taken by Europeans from Australia.

And now three of the four surviving spears taken by Captain Cook and his crew from Botany Bay have returned to Sydney for the first time in more than 250 years. 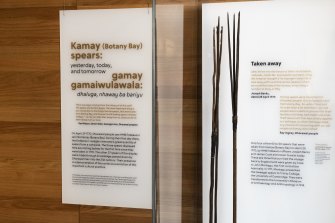 The spears taken by Captain Cook and his crew from Botany Bay.Credit:Rhett Wyman/SMH.

The spears, which currently belong to the Cambridge Museum of Archaeology and Anthropology and were in Australia on loan to the National Museum in Canberra, are now on display at the Chau Chak Wing Museum at the University of Sydney.

The exhibition is not permanent, and the spears will return to the UK in July. But the La Perouse Local Aboriginal Land Council is working with the museum on a long-term solution, in the hopes they may come home for good.

“These spears were taken at first contact, day one of when the Endeavour anchored … having three of the four back in Sydney for the first time in 250 years is very exciting for us,” said Noelene Timbery, the land council’s chairwoman.

Some 40 spears were taken by the crew of the Endeavour after landing at Kamay, now known as Botany Bay, more than 250 years ago. 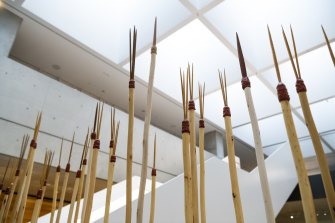 Contemporary spears on display at the Chau Chak Wing Museum, symbolising the 37 other spears taken by the crew of the Endeavour.Credit:Rhett Wyman/SMH.

They belonged to men of the Gweagal clan of the Dharawal peoples who resisted the Endeavour’s landing party.

Of those 40 spears, just four have survived.

“The history of this nation didn’t start in 1770 … these spears were collected in 1770 so they’re a real tangible tie to the people that were here prior to that,” Ms Timbery said.

The University of Sydney’s Deputy Vice-Chancellor of Indigenous strategy and services, Koori woman Lisa Jackson-Pulver, said it had been a privilege to work so closely with the La Perouse Aboriginal community.

“We are utterly guided by the community and their desires and wants,” she said. 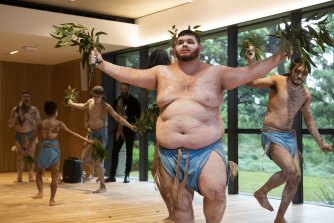 Dancers at the ceremony opening the exhibition in Sydney.Credit:Rhett Wyman/SMH.

Professor Jackson-Pulver also said the exhibition would be an excellent educational resource for both Aboriginal and non-Aboriginal people.

“This will also help people learn how folk made spears and other items like this … this is a continuous living culture and these items are as important to the cultural identity of the people in the day as they are to the people of tomorrow," she said.

The spears are being displayed alongside 37 contemporary spears to represent the 40 taken in total by the crew of the Endeavour.

“We’re putting that up side by side and showing that this is a continuing practice, it’s a continuing and very much alive culture,” Ms Timbery said.

“I don’t think there is a museum in the world that can assume that its items that belong to other cultures can stay there without permission and consent.”

The Aboriginal community from La Perouse has spent decades working to have artefacts repatriated. While these spears will return to Cambridge in July, Ms Timbery hopes they’ll be back in Australia sooner rather than later.

“Had these spears not been collected and taken to the UK they likely wouldn’t exist today, so I think we’re kind of aware of that, it's not to say that we’re happy that the spears aren’t held in Australia, but we’re very happy they’re here right now.”

Over the next four months, the Chau Chak Wing Museum will host the spears and hold educational activities for those coming to see them.

The museum’s acting director, Paul Donnelly, said the event was only possible because the university had combined its Nicholson Museum, Macleay Museum, and University Art Collection into a single venue.

“Bringing together three once separate museums into one has given us that profile and professionalism that allows us to have these very special events," he said.

“I think it's quite profound to know that your family comes from this region and these were taken, stolen 250 years ago and there’s no doubt it's your ancestors who have created these things … there’s this endurance of cultural practice and of community survival.”