Acting Victorian Premier James Merlino won’t be recommending the federal government’s sexual consent video, labelling the resource “a big fail” and calling on the government to remake the educational tool.

“I’ve got to be frank with you, I was pretty disappointed,” Mr Merlino said on Tuesday, “it was confusing, it was cringeworthy, it did not hit the mark.” 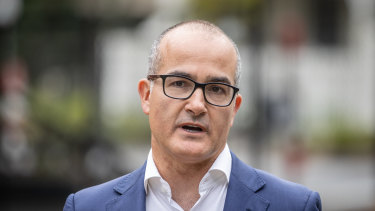 “It doesn’t work with the language that our young people have,” Dr Meath told ABC 774, “the more explicit we are with our language in clear communication, that gets the message across.”

“It’s always good to see any resources that we can use in this space … I just think this falls short of the mark.

“Our young people have their own very sophisticated language around this. And if you think about the other media that they’re watching, at the moment, it goes far beyond this … I thought it was all over the place.”

A suite of new online educational resources teaches students about consent through videos of milkshakes, tacos and an ocean that might be filled with sharks.

On Monday, women’s rights organisation Fair Agenda started a petition calling on the government to work with violence prevention experts to review the material on its Good Society website, which was launched as part of its Respect Matters program.

Videos aimed at students in years 10 to 12 on the website use metaphors to discuss consent and avoid mentioning the words “rape” or “assault”.

One features a teenage girl smearing a milkshake in a teenage boy’s face without his permission, appearing to represent sexual assault or rape.

Chanel Contos, the Sydneysider who led a campaign for better consent education in schools which resulted in thousands of students sharing their experiences of sexual assault, said she was deeply disappointed when she saw the “laughable” videos. 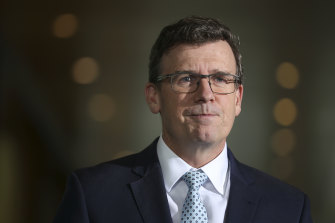 Federal Education and Youth Minister Alan Tudge said parents were the most important people to teach children about respect and relationships but that schools could also play a “vital role”.Credit:Alex Ellinghausen

“We cannot talk about sex, especially not consent, using euphemisms,” she said.

“People need to be equipped with the language they actually use so they can identify when they’re victims or perpetrators of coercion.”

Speaking from the United Kingdom, Ms Contos said when she showed a video to her British friends they thought it was a joke.

In a statement released on Monday the Education Department said the content on The Good Society website was created and reviewed by experts.

“Community members, teachers, and school leaders were also consulted to ensure the content was engaging for students and consistent with community standards,” a spokesman said.

“The Department of Education, Skills and Employment will continue to work with experts and stakeholders to update and refine content as required.

“There are over 350 materials on the website aimed at teaching general principles of respectful behaviour that can be applied in many situations. Materials are in line with national curriculum.”

When contacted Liquid Interactive did not want to comment and redirected the inquiry to the department of education.