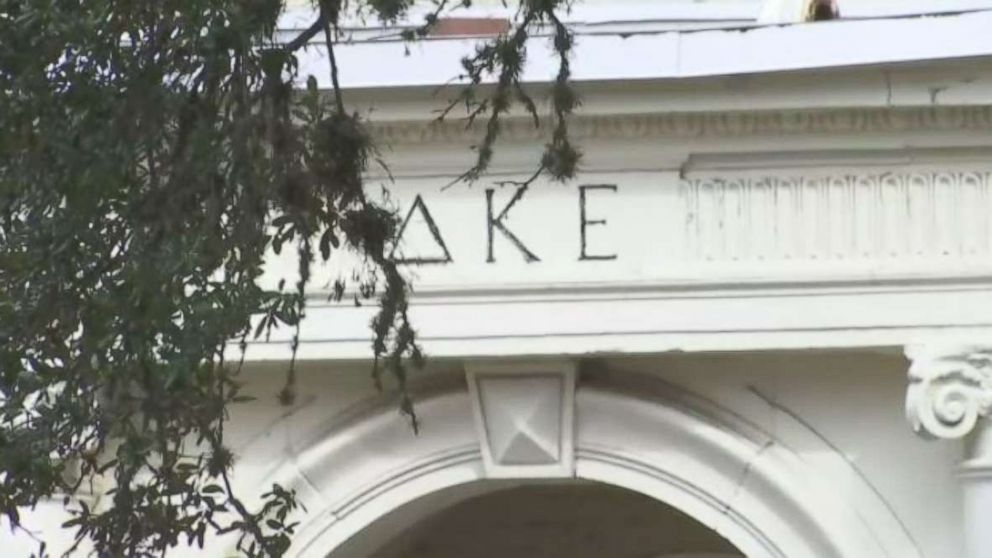 Nine members of a fraternity at Louisiana State University were arrested Thursday in connection to hazing activities that allegedly took place throughout the fall semester, officials said.

The young men, who are current and former students, all were members of the university’s now-closed chapter of the Delta Kappa Epsilon fraternity.

“This type of behavior is unacceptable and at complete odds with what we expect from our students. It does not belong at LSU,” Jason Droddy, interim vice president for strategic communications at Louisiana State University, said in a statement Thursday. “This is a sad day for the university, but one that illustrates the cultural shift occurring at LSU.”

The Louisiana State University Police Department received a report of hazing involving the Delta Kappa Epsilon chapter on Jan. 18. Subsequent interviews with several pledges, or probationary members attempting to join the fraternity, determined that numerous hazing incidents took place throughout the fall semester, between Aug. 20 and Dec. 8, according to arrest affidavits.

During interviews with police, pledges described incidents in which they were struck with a pipe, punched, kicked and slapped. Most pledges also spoke about an incident in which McNiece poured gasoline on a pledge, who then had trouble seeing because some of the fluid had gotten in his eyes and he had to rush to the shower, according to the arrest affidavits.

One pledge described an incident in which he was forced to strip down to his underwear and climb into an ice machine that was filled with water and ice, where he was made to stay for 30 to 45 minutes and feared he would be “beaten up” if he didn’t obey. He was then taken out and made to lay on top of broken glass on a nearby basketball court. Another pledge was forced to lie face down next to him while they were both “sprayed with a hose, had milk crates thrown at them and were urinated on,” according to the arrest affidavits.

The pledge told police that Duckworth was the individual who made him get into the ice machine and “actively participated” while he was lying on the basketball court, according to the arrest affidavits.

Duckworth and McNiece are not registered students this semester, and Duckworth also was not enrolled in the fall 2018 semester, when the alleged hazing incidents occurred, the university said.

Duckworth faces the most serious charges, including criminal hazing, felony battery and false imprisonment, according to the arrest affidavits.

Duckworth, McNiece and the seven other defendants in the case did not immediately respond to ABC News’ requests for comment.

Delta Kappa Epsilon’s national organization said it cooperated with police in the investigation and “acted decisively” last month in shuttering its chapter at Louisiana State University “upon learning of extremely disturbing hazing allegations.”

“In our ongoing educational programming regarding hazing prevention, we emphasize to our undergraduates that individuals should and will be held accountable for their actions,” the fraternal organization said in a statement Thursday. “We will continue our efforts to eliminate hazing where ever and whenever it occurs.”

It’s not the first time fraternity members at the Louisiana State University have been investigated for hazing. In September 2017, 18-year-old Maxwell Gruver died after authorities said he and other pledges were forced to drink during an alleged hazing ritual at the Phi Delta Theta fraternity’s on-campus house.

Weinstein Company to file for bankruptcy