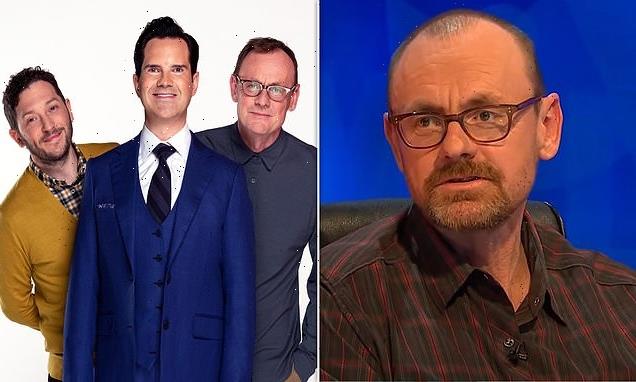 Sean Lock dead at 58: Comedian and star of 8 Out of 10 Cats dies of cancer ‘while surrounded by family at home’ – as ‘devastated’ co-star Jon Richardson pays tribute to his ‘idol’ who had ‘incredible comic brain’

Comedian Sean Lock has died of cancer at the age of 58, his agent said today.

He also wrote and starred in the popular BBC sitcom 15 Storeys High.

A statement from his agent Off The Kerb Productions said: ‘It is with great sadness that we have to announce the death of Sean Lock. He died at home from cancer, surrounded by his family.

‘Sean was one of Britain’s finest comedians, his boundless creativity, lightning wit and the absurdist brilliance of his work, marked him out as a unique voice in British comedy. 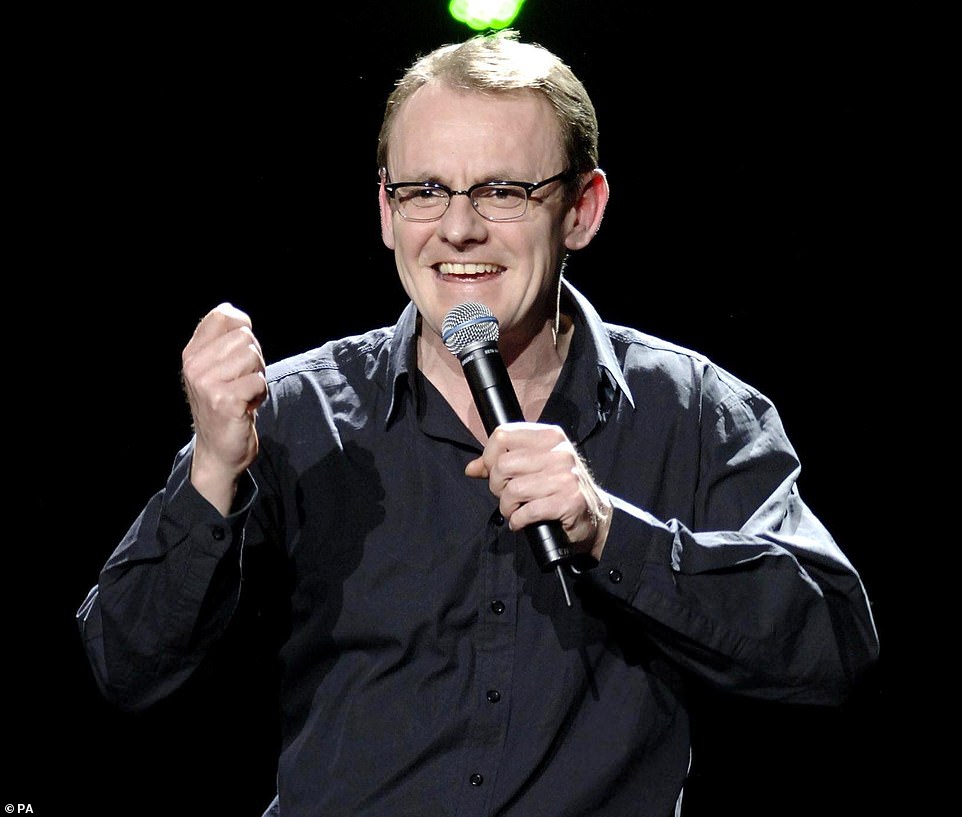 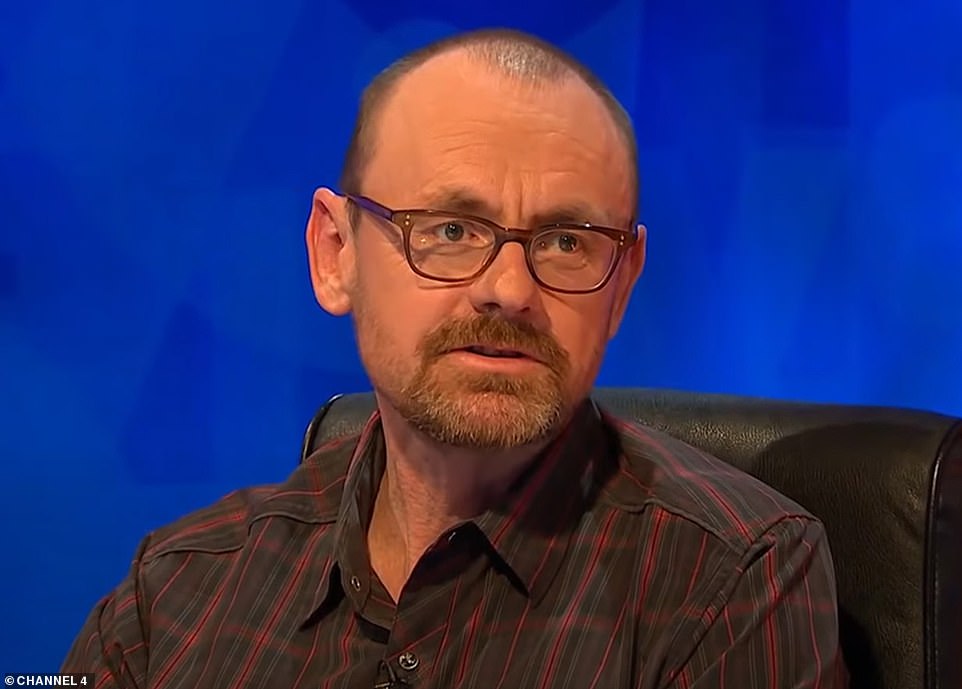 The TV star, known for his deadpan style, was a team captain on 8 Out Of 10 Cats Does Countdown (pictured in 2017)

‘Sean was also a cherished husband and father to three children. Sean will be sorely missed by all that knew him. We kindly request that the privacy of his family and children is respected at this difficult time.’

Comedian Lee Mack, who was a close friend, paid tribute saying: ‘I’ve known this day was coming for some time, but it’s no less heart-breaking. A true original both in comedy and life. I will miss him so much.’

Jon Richardson, his fellow team captain on 8 Out Of Ten Cats, said: ‘I idolised Sean as a comic long before I became a comedian myself and ten years working alongside him didn’t diminish that in the least.

‘An incredible comic brain and a truly unique voice. I’m devastated for his family today and sad for comedy that we have lost one of the very best. Undisputed, undefeated, carrot in a box champion. I will miss him.’ 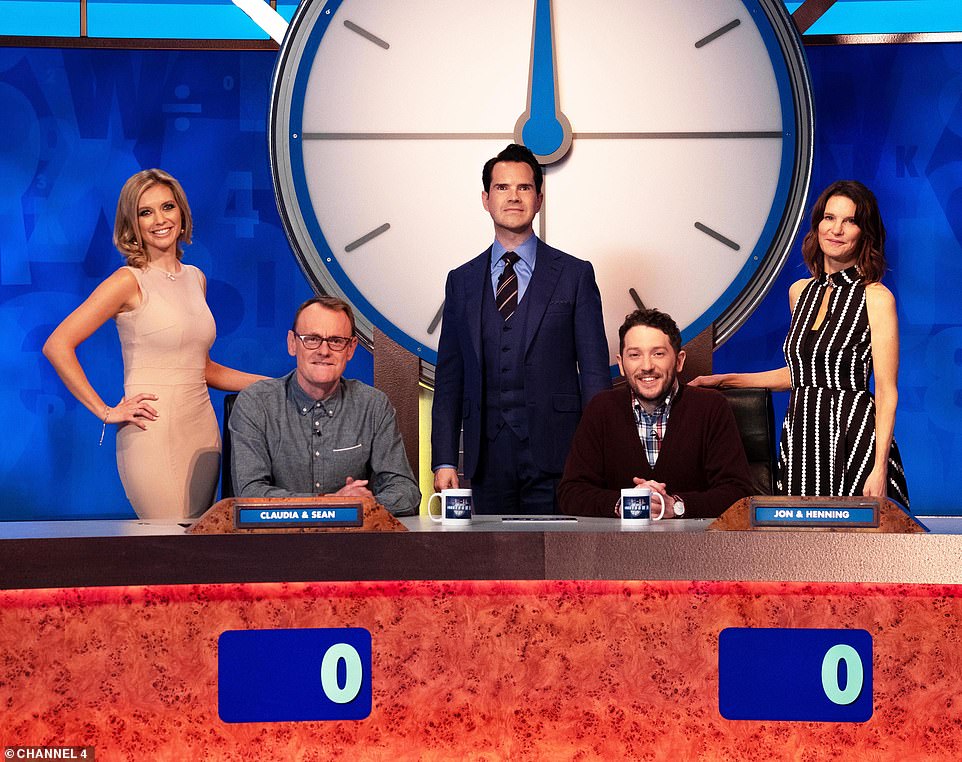 Sean Lock appeared on 8 Out of 10 Cats Does Countdown with Jimmy Carr, Jon Richardson, Rachel Riley and Susie Dent 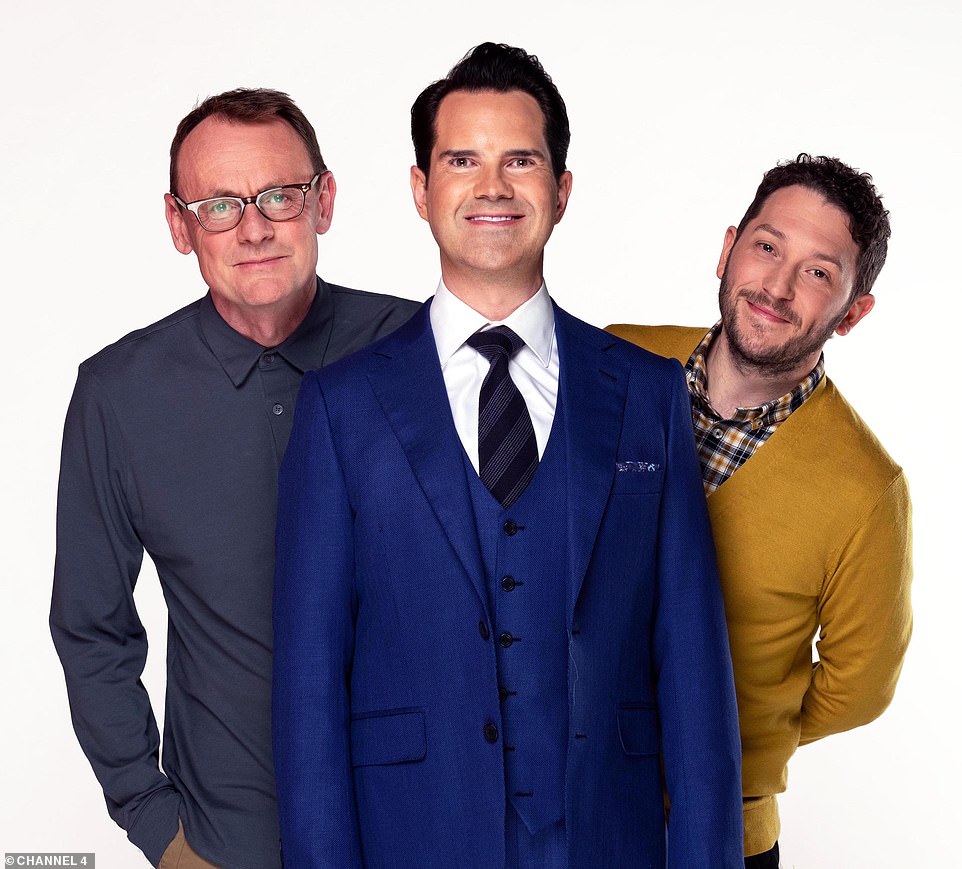 Comedian Alan Davies also paid tribute to ‘hilarious’ Lock, who has died from cancer at the age of 58.

He wrote on Twitter: ‘Sad news about Sean Lock. Funny on stage, hilarious off. We met in 1988 right at the start of our stand up careers. I hadn’t seen him in recent years as he quietly wrestled with illness but I feel very sad today for Anoushka and their children. RIP, Locky.’

And Richard Osman tweeted: ‘Over 15 years producing 8 Out Of 10 Cats, Sean Lock made me laugh so much and so often. A unique and brilliant comic voice. Love to his family and his many friends. RIP, Sean.’

Eddie Izzard also paid tribute to Lock, saying: ‘So sorry to hear this. Farewell Sean, you brought a wonderful comedic talent to the world and you will be missed’. Gary Lineker added: ‘Awful news. Such a funny man.’

Born in Woking, Surrey, the comedy star left school in the early 1980s and began working on building sites but developed skin cancer, which he blamed on over-exposure to the sun. He made a full recovery and focused on a career in comedy. 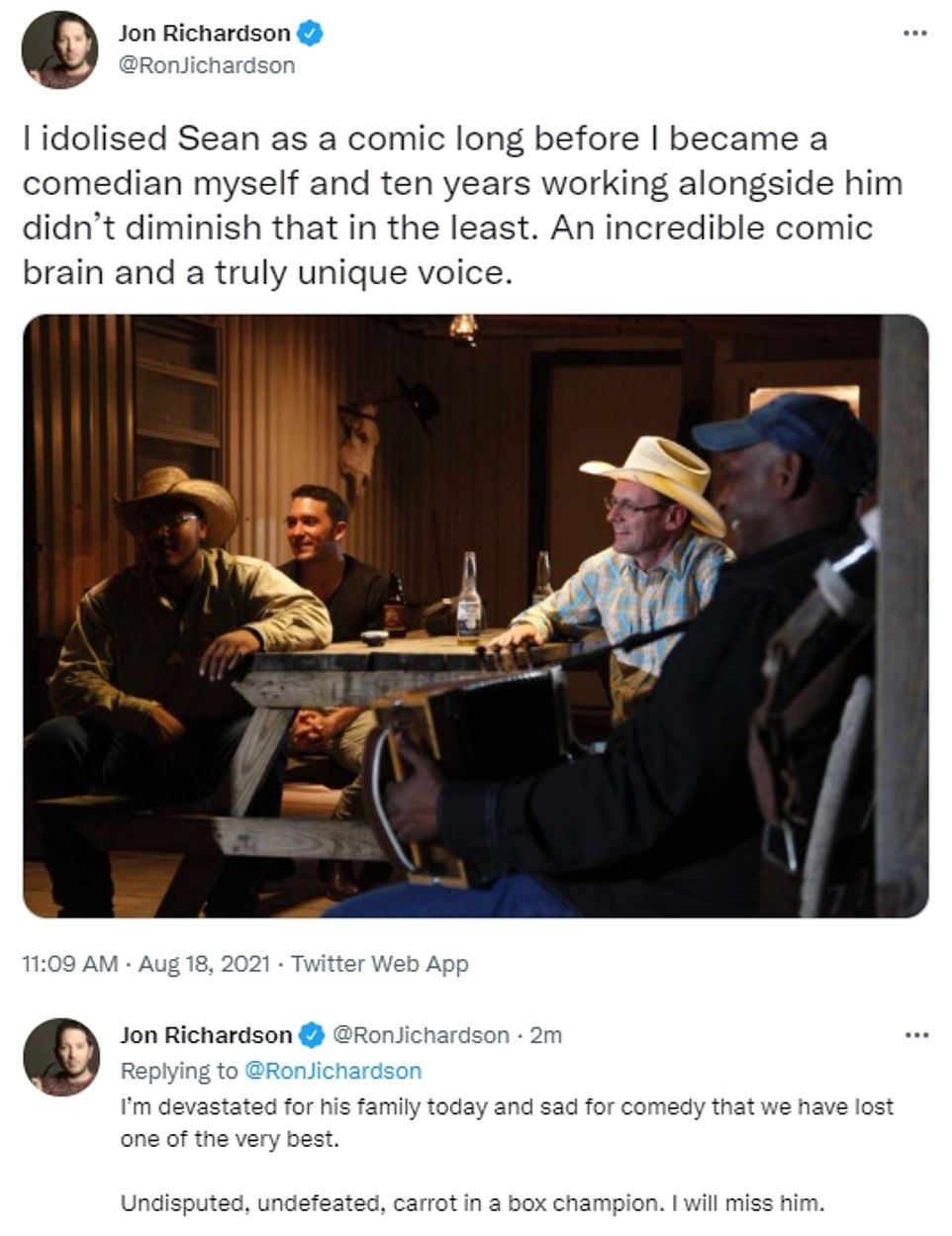 Jon Richardson, his fellow captain on 8 Out Of Ten Cats, said Lock was ‘an incredible comic brain and a truly unique voice’

One of his first professional TV appearances was in 1993, starring alongside Rob Newman and David Baddiel on their signature TV show Newman And Baddiel In Pieces.

He script-edited the 1998 BBC Two series, Is It Bill Bailey? and had his own show on BBC Radio 4 called 15 Minutes Of Misery, which was later expanded into TV series 15 Storeys High.

The show was set in a tower block and centred on a pessimistic character called Vince (played by Lock) and his flatmate Errol, played by Benedict Wong. 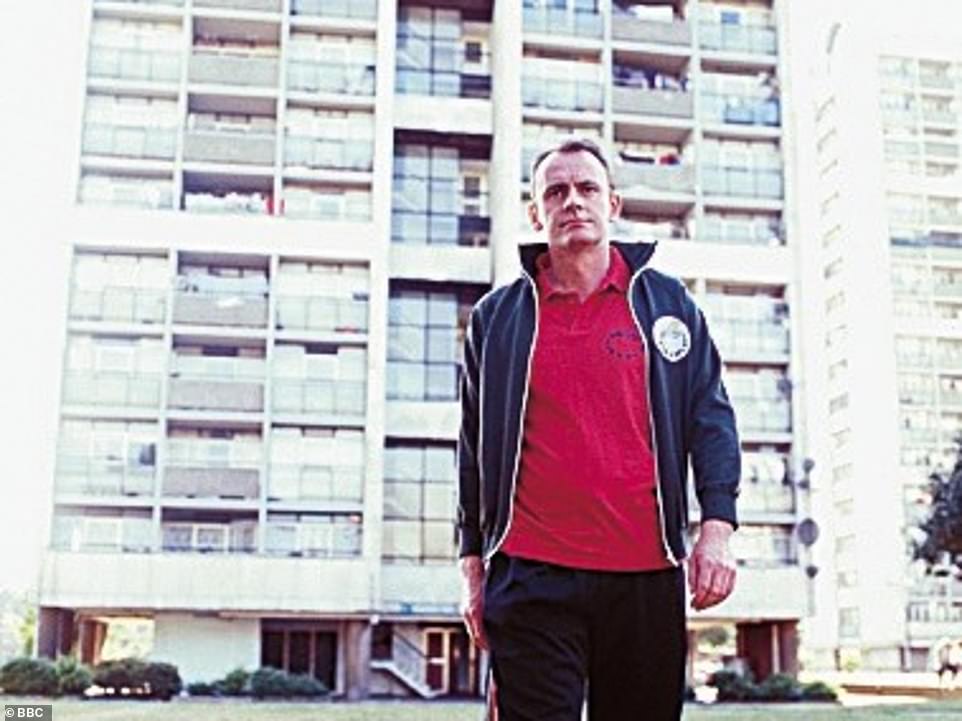 Lock had his own show on BBC Radio 4 called 15 Minutes Of Misery, which was later expanded into TV series 15 Storeys High (pictured) 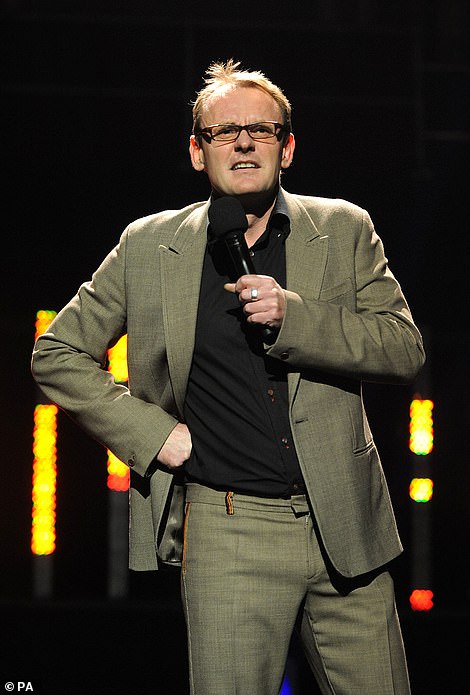 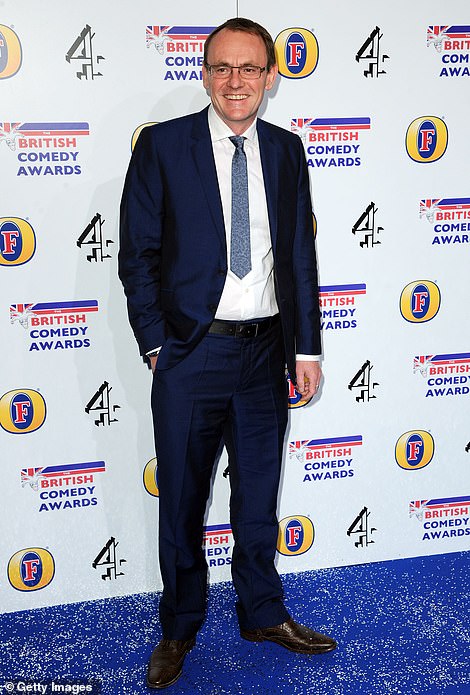 Between 2006 and 2007 he hosted Channel 4 series, TV Heaven, Telly Hell, in which he invited celebrities to share their own selection of TV’s triumphs and tragedies.

Speaking at the time, Lock told the PA news agency, he said: ‘I think one of my all-time favourite shows is Catchphrase with Roy Walker. I loved it. I used to like Roy’s restraint, because, for a comedian, the opportunity to take the mick out of some of the ridiculous answers could have been too hard to resist.’

Lock also appeared on panel shows including Have I Got News for You, QI, and They Think It’s All Over.

In 2000 he won the gong for the best live stand-up at the British Comedy Awards.