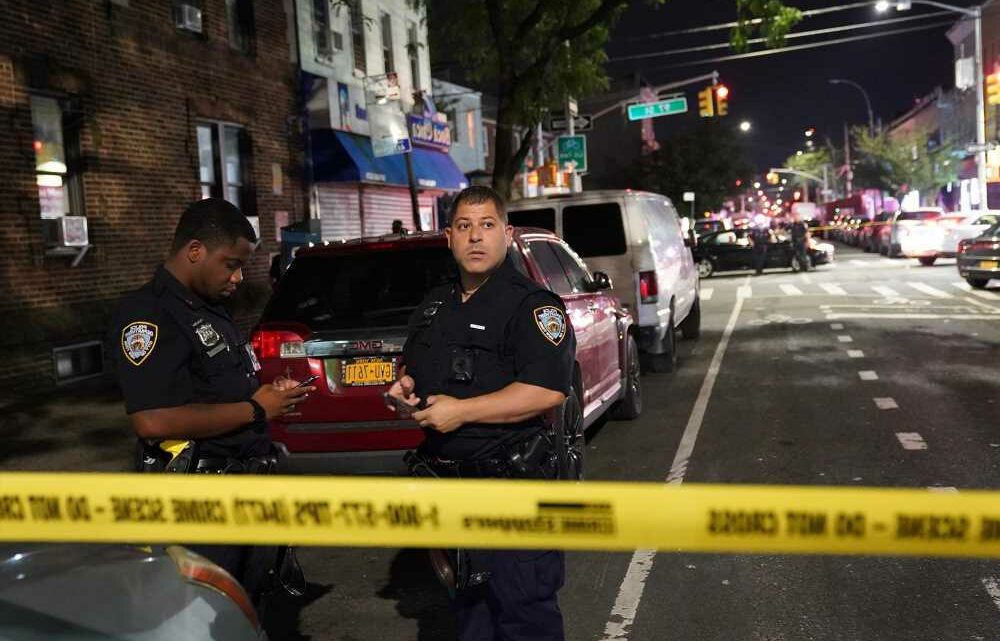 One killed, 5 injured including Sweet 16 partygoers in overnight NYC shootings

Eighteen people were shot overnight in New York City overnight, including a mass shooting in Queens and two men who were shot dead in Brooklyn in separate incidents early Sunday morning.

In Canarsie, a man was blasted just before 4:30 a.m. with multiple bullets in his torso by two gunmen, who fled the scene, while sitting in his car outside a Dunkin Donuts at 1547 Ralph Ave, according to police sources. Medics rushed the wounded 32-year-old to Brookdale Hospital, where he was pronounced dead about an hour later, police sources said.

The second fatal shooting came in Sunset Park at 3:14 a.m., when a 28-year-old man was shot six times in the back, according to the sources. He was pronounced dead around 7 a.m. Sunday at Lincoln Hospital. The shooter fled the scene — 3240 3rd Ave. — on foot on Boston Road, while wearing a black sweatshirt and blue jeans.

The gunplay continued at 4:50 a.m. when a 55-year-old man was shot in the right ankle at 172-02 Linden Blvd in St. Albans, Queens, police sources said. The victim was taken to Jamaica Hospital to be treated for his non-fatal wound.

In Manhattan, a man said he was approached by a man brandishing a gun and demanded he hand over cash, the sources said. At 2:15 a.m. at East 30th Street and 3rdAvenue in Kips Bay, the gun-wielding thief then snatched the 35-year-old victim’s chain and watch, before shooting him in his left thigh. The victim was taken to Bellevue Hospital and is expected to survive.

The bloody early Sunday morning came after 10 people were shot outside a laundromat in Corona, Queens on Saturday night, according to cops. A band of men on motorbikes or mopeds opened fire on 37th Avenue and 99th Street about 10:30 p.m., police sources said.

In addition, three bystanders were shot after two groups began shooting at each other after a dispute at 330 Audubon Ave at 11:10 p.m., according to cop sources. A 42-year-old woman suffered a gunshot wound to her left arm and medics took her to Columbia Presbyterian Hospital for non-fatal injuries. A second victim, a 58-year-old woman, was shot in her stomach, and a 78-year-old man was struck in both his torso and hand, police sources said.

The second and third victims were taken to Harlem Hospital and are expected to survive.