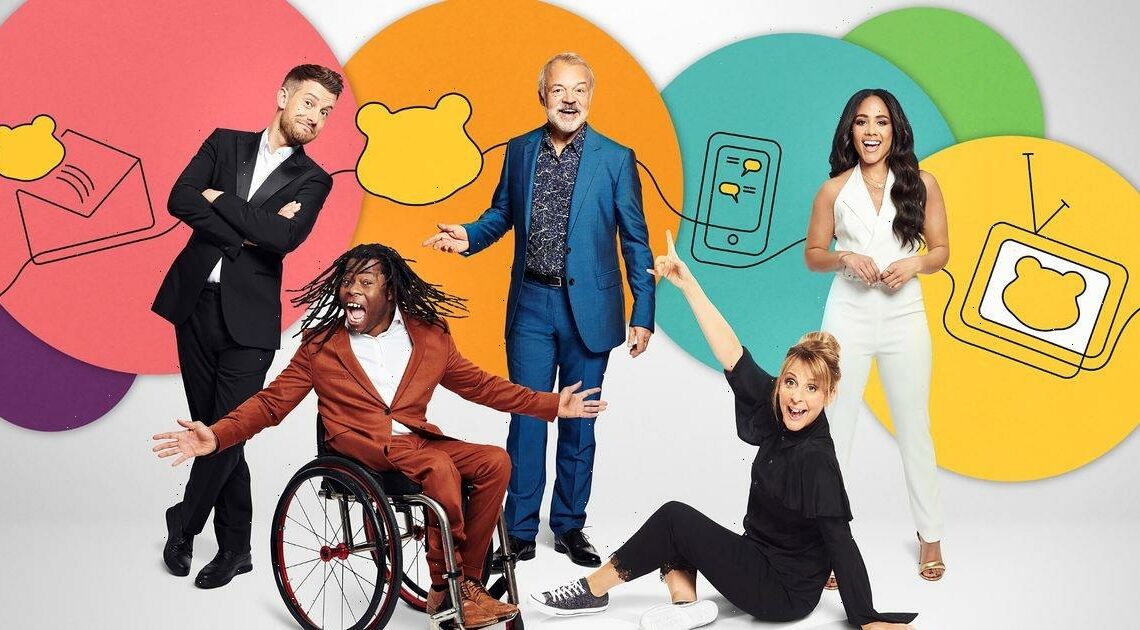 It’s that time again! Have your tissues – and wallets – at the ready, for Children In Need night, on BBC One on Friday from 7pm.

As ever, there’ll be a glitzy list of celebrities doing their bit, along with touching films highlighting the amazing work funded by the annual telethon.

Don’t forget this is the fundraiser that over the years has featured iconic TV moments such as Peter Andre and Katie Price singing A Whole New World, Peggy Mitchell’s clash with Catherine Tate’s ‘Not bovvered’ Lauren, Zara Phillips dancing to Gangnam Style in an Olympics stars special, and Martine McCutcheon belting out Barbra Streisand’s Don’t Rain On My Parade – a performance that launched her singing career.

“Fasten your seatbelts and grab the popcorn, it’s going to be one heck of a night,” says five-time host Mel.

As ever, there’ll be great music guests getting involved, with performances from global superstar Ed Sheeran and fellow chart-topper Tom Grennan.

“The music acts are my favourite part of the show,” says Alex.

“I am a big music fan and I love watching the artists perform live and do their thing. I also love when the final total is announced because it’s such a memorable moment every year.”

“I am always in awe at how BBC Children In Need brings everyone together, and the generosity of the British public never ceases to amaze me,” says Graham.

Having benefited first-hand from fundraising efforts in his youth, Ade stresses how “it can have such a positive impact on children’s lives”.

“Even last year, with everything that was going on, the nation still helped us raise a gargantuan amount of money, and it just shows how generous people really are. It’s incredible,” adds fellow host Chris.

This year’s campaign, Together, We Can, aims to raise funds that will support the local charities and projects providing essential frontline help to young people in communities throughout the UK.

We’re with you guys every step of the way!

It’s a night when anything can happen, but here are some of the highlights we can definitely expect…

I Can See Your Voice

Hosted by Danny Dyer, CBBC presenters Sam and Mark take on The Wall in a bid to win money for BBC Children In Need.

Celebrities take on Graham Norton’s infamous red chair. However, in a hilarious twist, a group of children will decide their fate as they preside over the lever.

In this touching special, Jay Blades and bear-repair duo Amanda Middleditch and Julie Tatchell work their magic on Billy’s bear Henry, who’s endured one too many spins in the washing machine.

The nation’s sporting heroes go head-to-head in a sports day showdown. The Olympians may be able to bring home the gold, but how will they cope in the egg-and-spoon race?

Children In Need, BBC One, Friday from 7pm

How Rich Is Adele as ’30’ Is Released?
World News