*SPOILERS FOR SEASON 4 OF STRANGER THINGS BELOW!*

If you’re still reeling from the major injuries and deaths during the season 4 Stranger Things finale, we’re here to tell you that things *actually* could have been worse. The hit series’ creators—the Duffer Brothers, of course—revealed in a recent interview that yet another member of the cast was originally supposed to die before episode 9 came to a close…and you’ll legit never guess who it is.

Matt Duffer briefed Collider on the stunning revelation: “In terms of who makes it, who lives or dies. I think there was a version where Dimitri, aka Enzo, didn’t make it.” *Pauses for dramatic effect and to regroup emotionally and spiritually* “Then he ended up making it…But that’s [the most] radical of a departure from the original idea versus what we ended up with,” Matt added. 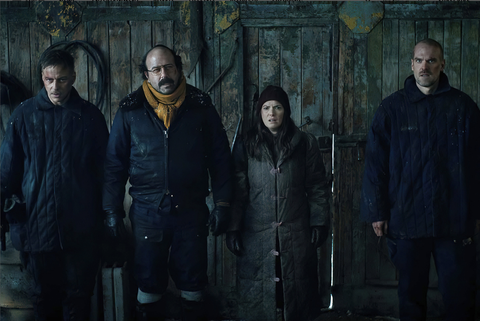 Dmitri’s character is played by Tom Wlaschiha, who you might also recognize as Jaqen H’ghar from Game of Thrones. However, in Stranger Things season 4, his character is initially introduced as one of the guards who winds up attempting to assist Hopper in escaping from a Russian prison with the help of smuggler Yuri Ismaylov…that is, until he himself is imprisoned for his treason. It’s then that Dmitri truly wins over our hearts after he and Hopper strike up an unlikely bond in their effort to get out…aaaand save the universe LOL.

At the end of the season 4, Dmitri even makes it out of the Russian prison alive with Hopper, Joyce, and Murray—though eagle-eyed fans observed that he was noticeably absent when Hopper and Joyce returned to Hawkins, so TBD on how his story ultimately plays out on season 5. Both Dmitri and Yuri quickly became fan favorites over the course of the new season, so much so that Stephen King—yes, that Stephen King—even mentioned he wanted to see a spinoff built around Yuri.

STRANGER THINGS: I love that slimy, slinky Russian guy, Yuri. He deserves his own show. Like BARRY, only Russian.

Ross Duffer also expanded on how he and his brother rarely deviate from storylines, making the decision not to kill Dmitri extra meaningful. “When we’re breaking a season, that is one of the first things we’re talking about is, where do we want this story to end up? So the ending is always that goal post,” he explained. “Even as we’re breaking episode one, we know exactly where we’re going. I don’t think we’ve deviated truly in any season for the finale, we’ve always stuck to it. I believe the case is the same here.”

Elon Musk: I want ‘as many’ kids as I can ‘spend time with’