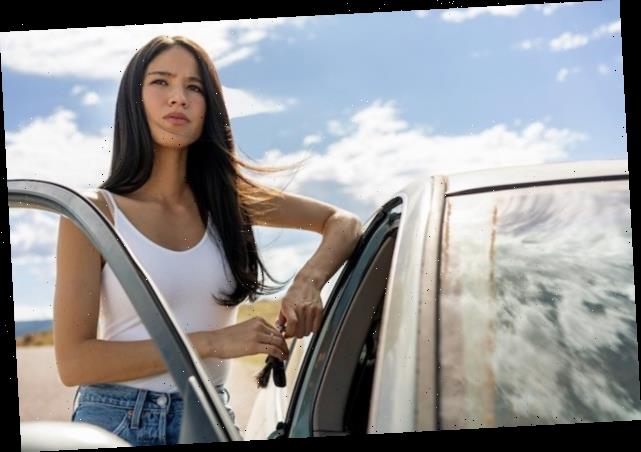 Yellowstone Recap: To Catch a Predator

Warning: The following contains spoilers for Sunday’s Yellowstone. Proceed at your own peril.

We knew from the start of Sunday’s Yellowstone that Monica was up to something. But what? She told Kayce that she was doing volunteer work. “At a car wash?” asked her husband, appreciating the fit of her tank top in such a way that it was a wonder that he wasn’t late for work. Turned out, Monica had cast herself as a damsel in distress, bait for Sila’s murderer. She’d no sooner “broken down” on the side of the road than he’d picked her up, taken her to his private killing field and begun to choke the life out of her.

Thankfully, Monica wasn’t as alone as she appeared. Mo blew out the guy’s brains, and suddenly, Rainwater and the authorities swarmed the scene (which was littered with more skeletons than you’d find at Party City around Halloween). “People talk about making a difference,” the chief told her, “but they don’t ‘cause they don’t risk. You risked everything. Today you made a difference.” Read on, and we’ll review the other big twists in “I Killed a Man Today,” from Beth’s Hail Mary play to the most poorly timed instance of skinnydipping in the history of… well, getting naked!

‘IF YOU’RE JOINING THE FAMILY, CAN YOU PLEASE BE THE ONE PERSON IN IT WHO F–KING TALKS TO ME?’ | Early on in the episode, Rip, Jimmy and Tate accompanied John as he partook of his equivalent of “retail therapy”: horse-shopping. When he was done, he asked Rip to find a new home for the horse that bucked too hard for the bunkhouse boys but not hard enough for the rodeo. “Can’t have him killed just because he doesn’t wanna be ridden,” John said. “I don’t wanna be ridden, either.” Before he let Rip go, he challenged his future son-in-law to, for Pete’s sake, tell him that he and Beth were engaged. Why did no one ever tell him anything? John wondered. “People don’t talk to you,” admitted Rip, “’cause they’re scared they’ll let you down.” Not sure if I should be saying “Aww” or “Ouch” to that. Maybe both?

Meanwhile, Beth’s attacks on Market Equities inspired every hedge-fund manager in New York to start shorting Roarke’s firm. (Needless to say, s–t got thrown around his magnificent home.) Willa responded — as I suspect she does to everything — coolly. She set in motion a plan to start buying Schwartz & Meyer stock. “We’re squashing this bug today,” she vowed. And the bug in question certainly began to feel the pressure. When Beth’s assistant brought her java, she screamed, “Do I look like a need a f–king cup of coffee?!?” and fired her on the spot. Desperate, Beth called in reinforcements: Angela, who warned, in that nebulous way of hers, “I don’t take nibbles, I take bites.” Whatever Angela was going to do to help Beth, it could make them partners by the very next week. While Angela worked her magic, Beth told the media about the hostile takeover, both irritating and impressing Willa. “After we get this bitch fired,” she quipped. “I should hire her.”

‘I MADE A PROMISE, AND I’D RATHER LOSE IT THAN BREAK IT’ | When Kayce arrived at his office, he found it full of ranchers eager to thank him “for protecting what’s ours and risking your life to do it” — and Jamie, in awe of their gratitude. But that wasn’t why he was there, of course. Market Equities had offered the Duttons half a billion dollars for their land, he explained — land that they’d have to sell in another year or two, anyway. So would Kayce please take the offer to Beth to take John? It couldn’t be Jamie who delivered it; he knew that. “Beth has poisoned me to him.” But if Kayce took the offer to Beth to take to John… maybe he’d listen to reason. Shortly, Kayce turned up at Beth’s office, interrupting a very bad day that was ending with S&M stock plummeting and Bob flying in, presumably to fire her.

Later, Beth took the offer to her father and laid out what was going to happen if they didn’t sell to Market Equities. Come hell or high water, they were losing the land. The only question was, were they going to get rich giving it up… or go broke fighting a losing battle to keep it? The latter, John said. He couldn’t bring himself to sell. “Not an inch. Not one.” He was sure — sure! — there had to be another way. Elsewhere, Teeter decided to take a break from fence repair to go skinnydipping and dragged Colby with her. Worst. Mistake. Ever. They were confronted by Wade and his son, who proceeded to whip Colby with a lasso and, unless I’m mistaken, drown him as they rode their horses around him in the lake! WTF is his beef with John? Damn!

‘IT’S NO WONDER WE’RE MARRIED, HUH? WE THINK EXACTLY ALIKE’ | Tipped off by Rainwater that Kayce had kept his shootout a secret from her, she balked when he returned home that evening and said that his day had been like all the others. “What goes through your mind when you’re lying to me?” she asked. He actually had a good answer. “I’m always in a position where I need to kill or be killed,” he explained. “Hell, it’s my job now. I didn’t want you to think I’m a bad man, even if I think it.” And he didn’t seem to really think it. “Every man I killed made the world safer,” he added. “That’s how I feel about the man I killed,” she replied, finally confessing that it wasn’t a car wash that had left her blood-spattered.

Finally, after finding a good home at a sanctuary for the horse that didn’t buck hard enough/bucked too hard, Rip asked Lloyd to be his best man. Over a beer afterwards, the old feller marveled, “You did something that no one does, Rip. You’ve outlived your past.” Had he, though? Because playing at the bar where they were drinking was none other than Walker, the antagonistic hand that Kayce said he’d — but didn’t — “take to the train station.” “He’s supposed to be dead,” remarked Lloyd. Indeed, he is. So, what did you think of “I Killed a Man Today”? Is Colby really a goner? Presumably, Walker is toast, right? And how screwed would Monica have been if her attacker had stabbed rather than strangled her? Yikes!

Yankees calling up Clint Frazier for another big opportunity