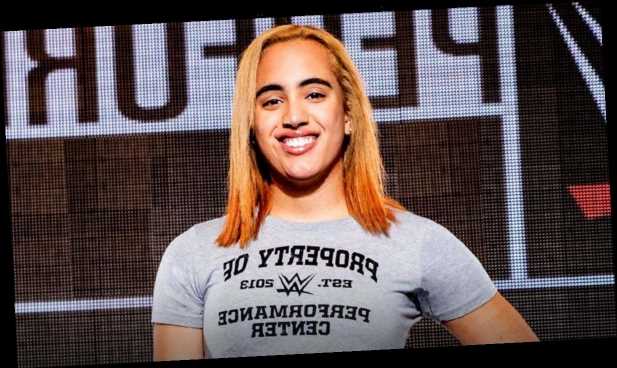 In one of the more interesting pieces of wrestling news 2020 has had to offer thus far, Simone Johnson–AKA daughter of Dwayne “The Rock” Johson–has signed a deal with WWE to begin training at the company’s performance center. Now, with the 18-year-old trainee–and WWE’s first-ever fourth-generation superstar–preparing to embark on a new career, two of WWE’s biggest names have some sage advice for her.

Reigning Raw Women’s Champion Becky Lynch, for instance, wants to make sure Johnson knows the uphill battle that’s ahead of her. “Look, she’s got some big shoes to fill, but she’s gonna do it. I know her. I know how much of a hard worker she is,” Lynch said at a press conference for Wrestlemania 37 in Los Angeles. “The game has changed with the last year, You saw me main event WrestleMania. I ended up leaving holding two belts of my head and the crowd was still going. There’s never been a time like this for women in the sport. We’re just gotta keep going. We just got to keep changing the game.”

Former WWE Champion Roman Reigns, on the other hand, wants Johnson–his real-life cousin–to realize the importance of finding her own personality in the industry, rather than relying on recreating what her movie star dad did during his tenure in the company.

“I would say try to develop your own personality and develop your own shtick, your own character. I mean, we can do anything we want,” he explained. “I could have been the savage from the island of Samoa if I wanted to, but I developed a different character and I went a different route and I’m still able to pay that homage to my heritage and our lineage and represent our family the same. I think just for her own experience, it’s better to create your stuff. And she’ll have such a stronger tie to it, it’ll mean so much more to her and she’ll feel so much more accomplished if she develops that on her own.”

That’s a sentiment Lynch agreed with, adding, “I think it’ll be good for her to try and make her her own way. Don’t rely on wrong on the past. Don’t rely on what other people have tried. Try to make something new for yourself.”

Both WWE superstars are convinced Johnson won’t have much trouble finding herself in the wrestling industry. Another supporter in her corner is none other than WWE chief brand officer Stephanie McMahon. “Simone is perfectly poised to be a success in WWE, regardless of how people will be comparing her, because her parents have taught her what it means to be the hardest worker in the room,” she said. “They’ve taught her about perseverance. They give her every opportunity to prove herself and that’s what she does. And I think when you’re brought up with those kinds of values and that kind of perspective, that’s how you’re going to achieve success.”

Whatever the case, once Johnson undergoes her training and is ready to shine as a WWE superstar, Lynch will be waiting. “Whenever she’s ready, I’ll be up here holding down the fort.”