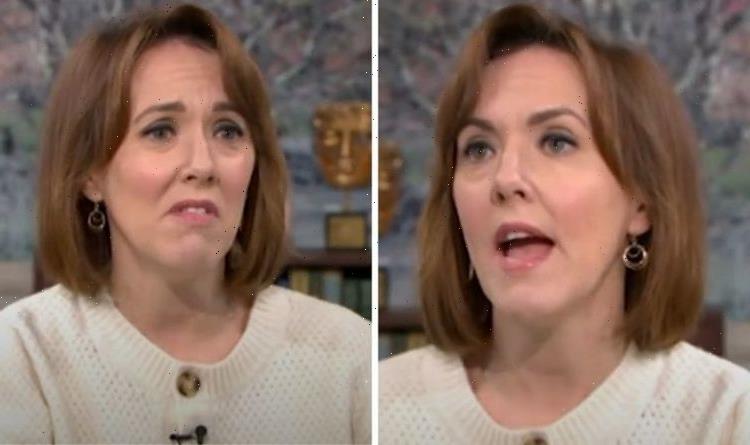 The journalist was debating the topic of cancel culture on This Morning on Wednesday, where Phillip Schofield and Rochelle Humes detailed comments made by Davina in which she slammed the social media practice. Agreeing with The Masked Singer judge, Camilla called cancel culture “pernicious” on the ITV chat show.

Davina, 54, said she’s faced a backlash over old tweets in the past and criticised the tendency for people to be cancelled, saying she prefers to “forgive” people.

Speaking on Rylan Clark’s podcast Ry-Union, she remarked: “It is really weird to haul somebody over the coals for a tweet in 2011.

“You’ve got to be allowed to change your mind.

“Sometimes people could have been racist or homophobic 10 years ago and they might have met somebody along the way who’s made them see the light, and they are so ashamed of the way they used to feel.

“They apologise, yet that is not enough and they are still branded homophobic.”

Camilla, 42, stated she agreed with the comments, describing why she finds cancellation to be harmful.

She remarked: “So I think this kind of cancelling of people who, often in youth, say something really irretrievably stupid, and they say 20 years later ‘well I’m a different person and I was only a kid just talking nonsense’, I just think this rush to cancel is really pernicious.”

She added: “And it’s worrying for free speech.

“Because actually, there’s nothing wrong with disagreeing, provided you can do it agreeably.

“And actually sometimes, some of these issues are about civility and a lack of politeness.”

Referencing Prime Minister Boris Johnson’s 2018 comments in which he compared women wearing burkas to “letterboxes,” Camilla continued: “Like, express your opinion but be polite about it.

“Just to use for example Boris Johnson’s “letterboxes”, regardless we can have a debate about women wearing the burka, that just wasn’t polite.”

Some viewers took to social media to argue against Camilla’s comments.

Twitter user Dee Otti wrote: “Is Camilla saying is ok to be racist because the Box references was racist!! #thismorning.”

Similarly, Cassie Walker asked: “Is Camilla saying that being racist is ok if you do it in a polite way?? #ThisMorning.”

Others agreed with her take though, with Elizabeth Scott writing: “#ThisMorning Well said Davina and Camilla.

“Only thing that should cancelled are the wokes gone mad who get offended at nothing.”

Camilla often appears on the show to weigh in on various topics.

She commented: “Well hang on the Met Police aren’t for hire.

“Prince Harry said he will pay for them to protect him and his wife and his children. But that then opens the flood gates to any celebrity.”

This Morning airs weekdays at 10am on ITV.

Cash-strapped council slammed for spending £55,000 on 12 snowmen sculptures for Christmas – The Sun