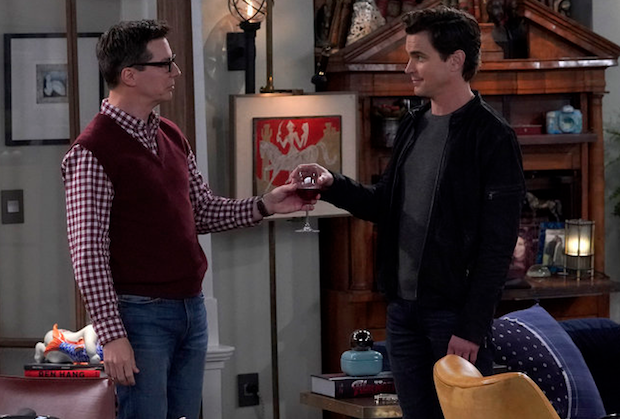 Will & Grace Fall Finale Recap: Funny With a Chance of Guest Stars

If you’ve ever said to yourself, “What wouldn’t I do to catch Matt Bomer’s eye!” Thursday’s fall finale of Will & Grace had your name written all over it. You see, in “Anchor Away,” Will found himself so enamored of the TV newscaster that the guest hottie played that he attempted to turn himself into the airhead of his crush’s dreams: in other words, Jack. And in the episode’s other plot, Karen’s need to obtain photos of Stan in the act with former mistress Lorraine (Speechless’ Minnie Driver) took the boozehound and Grace to… On second thought, keep reading. We’ll get there.

‘I REST MY FACE, JUDGE MOODY’ | As “Anchor Away” began, Will attempted to get a cuppa joe from Timothy (Adam Rippon), a barista who was more interested in serving attitude than coffee. While Jack was trying on Will’s “Maddows” — aka glasses — in walked news hunk McCoy Whitman (Bomer). “I fantasize about him every night,” Will admitted, “right about 6:30 and 10:30.” Jack immediately guessed that Will would need his help since McCoy wasn’t into guys who’d use words like “indubitably.” As if, Will replied. But, while he was putting on a show of being dumb to show Jack how dumb doing so was, he got McCoy’s attention. “Stop looking for a pore,” he advised. “You’re not going to find one.” He then asked out Will but wouldn’t give him his number, saying that his smart friend could figure out how to reach him.

That night, Will cooked dinner for McCoy but did it all wrong, according to Jack. His entree, for Pete’s sake, was a dish that only a smart person could even pronounce. Jack’s solution? He’d pretend that they were at his apartment, and he’d prepared the highfalutin dinner. All Will had to do was act like someone fun and frivolous. “Do you know anybody like that?” asked Jack without grasping that his pal had already begun to imitate his mannerisms. When McCoy arrived, Jack played the role of Will as best he could. And Will… he made his entrance asking, “Who’s easy on the eyes and hard everywhere else?” Ah, he was perfect for McCoy. Over dinner, Will did a spectacular Jack impression. He even gave himself his own one-man show. When Jack realized that Will was imitating him, he appeared at first to be upset. Then he huffed, “I have never in my 34 years… been so deeply, deeply flattered.” And since he and Estefan were monogamish, he wanted Will to tap McCoy so that he could enjoy him vicariously. Not that he’d ever use a word like vicariously!

‘YOU’RE PATTY… YOU LIVE WITH THAT GAY  GUY, BILL’ | In storyline B, after Karen learned from her divorce lawyer that Stan had photographic evidence of her affair with Malcolm — meaning that her alimony payments were going to be as little as her interest in spending a day sober unless she got photographic evidence of her husband’s infidelity — she and Grace took off for Suckingham Palace, the club at which Lorraine was stripping. Quickly, Stan’s mistress admitted to Grace that, oh sure, she had all kinds of pics… but she wasn’t about to hand them over to help Karen! That is… unless the redhead proved that she wasn’t looking down on her by taking over on stage. When Grace did so, she got boos. But hey, “this is what a real woman looks like,” she hollered. Meanwhile, Karen appealed to “the young, withered slag” in Lorraine. But again, she refused to hand over the pics, feeling that Karen, too, looked down on her. In response, Karen suggested that the two of them were actually the same: They’d both been screwed and screwed over by the same man. After she said goodbye to Lorraine with a pep talk and a lap dance, the stripper realized that her “mother” had snagged her phone with the pics on it, and encouraged her to take Stan for all he was worth. So, a lap dance with a happy ending?

‘WHY ARE ALL THE GOOD ONES SMART, TAKEN OR ANDERSON COOPER?’ | As the episode drew to a close, Will gave Jack the signal to beat it so that he could make his move on McCoy. Before Jack left, though, the newsman got a call from Kellyanne Conway and posed a legal question to law professor Jack, who insisted that if he had any more degrees, he’d be a thermometer. But since the only law he knew anything about was Jude, the jig was up: McCoy realized that Jack, not Will, was the idiot. When Will stood up for his buddy, and Jack admitted to McCoy that he was unavailable, the date was well and truly over. As McCoy left, Will pegged him as insecure — that was why he couldn’t date his intellectual equals. When Jack departed next, he stopped grumbling about not having gotten to sleep with McCoy through just Will long enough to say to his pal, “Thanks for not letting him call me an idiot” — and shut the door on his own face.