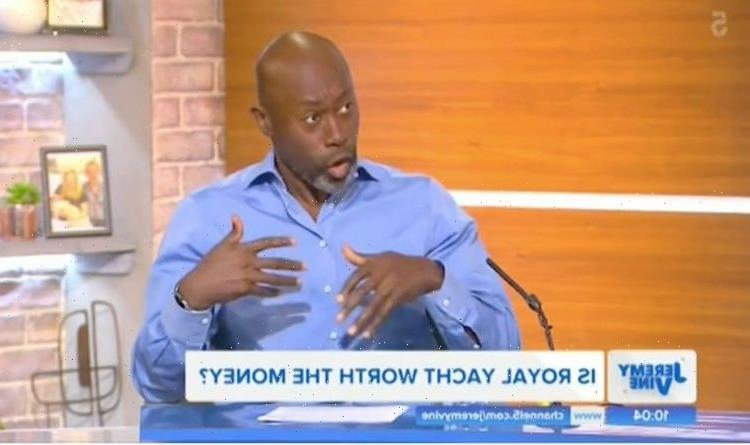 Broadcaster Henry Bonsu has condemned Boris Johnson’s “floating embassy” project, calling it “ridiculous”.  The Prime Minister announced that he wants a new national yacht, where he can sail the globe and host diplomatic discussions to promote and strengthen Global Britain’s role as an international actor. Confirmation of the estimated costs for the project came days after the Government confirmed NHS staff would only receive a 3 percent pay raise in thanks for their efforts during the pandemic.

The new yacht would be a successor to The Royal Yacht Britannia, which was launched by The Queen in 1953 and was retired in 1997.

Speaking on Jeremy Vine on Five show, the broadcaster remarked: “I mean, the procurement will take years and years, you know. I don’t think we’re gonna actually build the ship until 2024 and 2025, and it’s not quite clear what the purpose is.

“They say it’s meant to be a floating embassy or the size of Boris vanity project. The former chancellor Ken Clark just calls it a bit of naked populism.

He went on: “This happened with several other bits of infrastructure like HS2 (High Speed 2) ballooning and spiraling.

“And if it really is just about global Britain and having a floating embassy, well, we’ve got about 150 or 200 embassies and consulates around the world everybody in those countries. why do we need a floating one?”

Host Jeremy Vine interjected: “You can move it! Put it on wheels.”

The new national flagship is expected to be in service for around 30 years.

However, Boris Johnson has been called out by Labour members after it was revealed that a new national flagship could cost up to a quarter of a billion pounds.

Labour implored the government to ditch the plans, with shadow Home Secretary Nick Thomas-Symonds stating that the PM had “lost control of his vanity yacht”.

He said: “It is absolutely staggering that costs have rocketed by £100m in a week.

“Labour would scrap the government’s latest pet project and invest taxpayers’ money wisely to tackle crime and the surge in antisocial behaviour under this Conservative government.”

Mr Bonsu continued: “I mean if you go to some of these countries right you know, go to France, Paris or go to the British Embassy in Washington, these are very splendid buildings.

“These are great, almost palatial buildings, and you could host a private president or prime minister there. It sells Britain.

It's a keeper: Caeleb Dressel wins Olympic gold on his own

Who is Francesca on Love is Blind?
World News