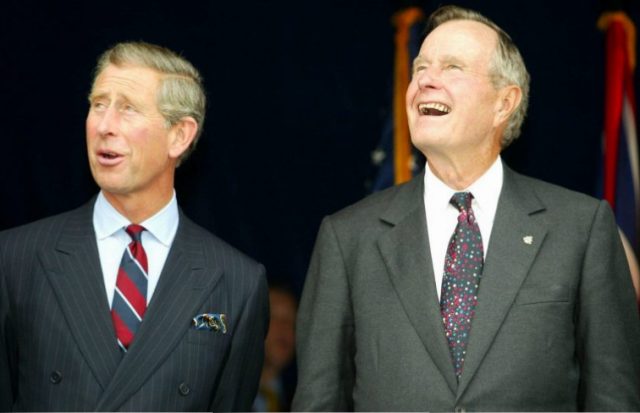 When former President George H. W. Bush is laid to rest his funeral will be attended by living U.S. presidents as well as other D.C. politicians, dignitaries, and a member of Britain’s royal family.

On Tuesday, Dec. 4, Clarence House tweeted, “The Prince of Wales will attend the state funeral of former U.S. President George H.W. Bush. The service will take place tomorrow at The National Cathedral in Washington. The Prince will be representing Her Majesty The Queen.”

The announcement left some wondering about if Charles ever met the late president or if they had a friendship. Here’s more on just how well the Prince of Wales actually knew George H. W. Bush.

Announcement of his death

The 41st President of the United States died on Nov. 30, 2018. His son, George W. Bush, later released a statement about the passing of his father.

“Jeb, Neil, Marvin, Doro, and I are saddened to announce that after 94 remarkable years, our dear Dad has died,” the message read. “George H. W. Bush was a man of the highest character and the best dad a son or daughter could ask for. The entire Bush family is deeply grateful for 41’s life and love, for the compassion of those who have cared and prayed for Dad, and for the condolences of our family and fellow citizens.”

A statement from Queen Elizabeth II

Upon his death, Queen Elizabeth II also released a statement. Her Majesty had a special bond with the former president as she was the first British monarch to visit his home state of Texas in 1991. She and her husband, Prince Philip, also visited Bush and his wife, Barbara, when their son was in the White House in 2007.

“It was with sadness that I learned of the death of President George H W Bush last night,” her statement read. “President Bush was a great friend and ally of the United Kingdom. He was also a patriot, serving his country with honor and distinction in Office and during the Second World War. Prince Philip and I remember our days in Texas in 1991 with great fondness. My thoughts and prayers are with President Bush’s family and the American people.”

The queen and Philip weren’t the only ones who visited with and had a close relationship with George H.W. Bush. Their son, Prince Charles, did as well.

Charles and his ex-wife, the late Princess Diana, also made trips to the U.S. to visit the president and former first lady even before his parents traveled to Texas. Therefore, it makes sense that the Prince of Wales attends the service and represents the monarch especially since his mother no longer travels overseas.

The queen’s 2007 trip to the White House is the last time she was in the U.S.

Read more: George H.W. Bush: What Caused His Death, and What Was His Net Worth at the Time?