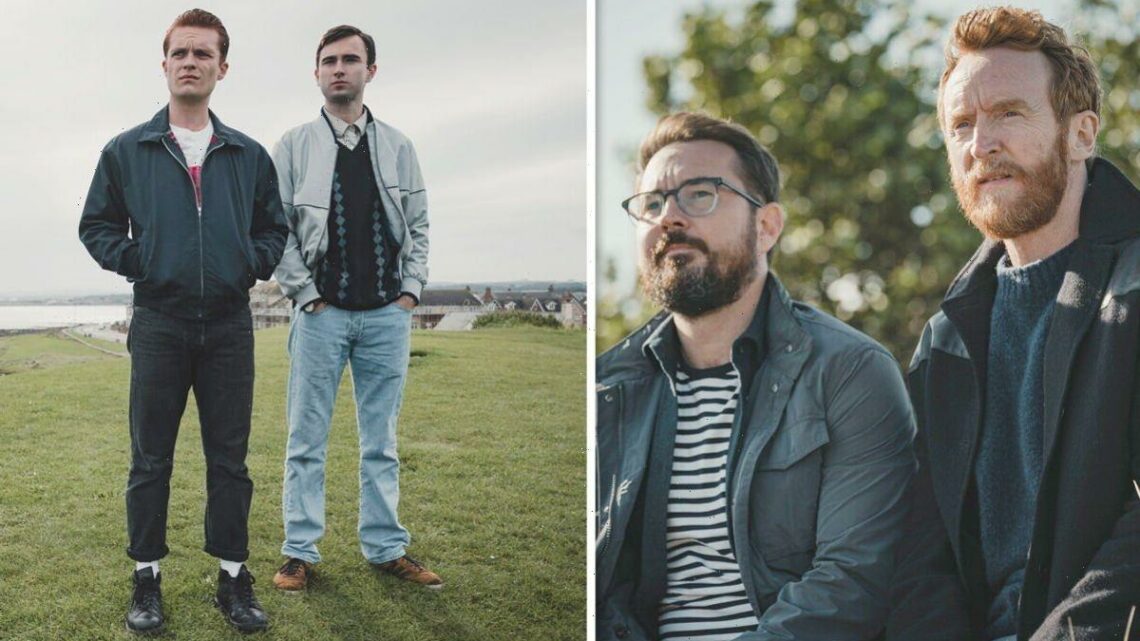 We look at the tragic true story behind BBC drama Mayflies

Mayflies will be airing on BBC One this evening (December 27) at 9pm with the concluding half hitting screens at the same time tomorrow. The mini-series stars Line of Duty’s Martin Compston, Hollywood star Ashley Jensen and Tony Curran and focuses on a 30-year friendship between to Tully Dawson (played by Curran) and Jimmy Collins (Compston). Despite the years and the geographical distance, the pair remain loyal to each other.

When Tully gets a devastating terminal cancer diagnosis Jimmy immediately comes to his side for his friend’s final months.

The drama flits between their hedonistic youth as working-class teens growing up in 1980s Scotland and the present as Tully bids farewell to life.

Their journey is a heartbreaking one and even more so after Tully opts for assisted dying.

Mayflies’ cast and crew recently spoke about the series to media including Express.co.uk at a Royal Television Society Q&A panel.

Is Mayflies based on a true story?

Yes, is the short answer. The two-part drama is an adaptation of author Andrew O’Hagan’s 2020 novel of the same name.

Mayflies is autobiographical with the character of Tully based on O’Hagan’s old friend Keith Martin, with whom the writer had grown up in his native Irvine, Scotland.

Much like the novel, Martin called O’Hagan to tell him the news about his cancer diagnosis with only four months left to live.

Martin died in 2018 aged 51 with O’Hagan’s novel coming out a couple of years later.

Jimmy – much like O’Hagan – is a writer who comes back to Scotland after becoming successful and moving away.

Addressing the real-life story element of Mayflies, actor Compston said: “Playing Jimmy, he’s sort of a version of [author] Andrew in there somewhere and that can be quite intimidating as an actor.”

But Compston said O’Hagan, who also served as an executive producer, was often on set to offer support and advice to him.

While Curran said the relationship between Tully and Jimmy was something of an antidote to toxic masculinity.

“But then, the way that Andrew deals with it is that you see toxic masculinity but then there’s tender masculinity. You don’t see it a lot on television.”

Curran praised the tender relationship between Jimmy and Tully as they battled to say goodbye to each other.

Both the TV series and the novel celebrates the decade with the show boasting an impressive soundtrack evocative of the period.

But Mayflies goes beyond this and taps into being working-class in Scotland from this bygone era.

O’Hagan even makes a cameo in Mayflies in a blink-and-you’ll-miss-it moment in the show.

Producer Claire Mundell commented on changing the format of the story: “The book, as you know, falls into two halves: the young boys’ story and the older men’s story.

“And I think that worked brilliantly in the novel because as the reader you kind of fill in the intervening years, if you like, between the first part of the book and the second part of the book.

“But I think when you’re telling a story on screen, television eats up story and we’re quite unafraid of the non-linear timeline, having made The Cry, which was a non-linear timeline to blow your brains in such a complicated way.”

She went on to say: “But it just felt like the story in the past of young boys provided a context for what is Jimmy is going through in episode one in the sense that Tully had brought him back here to remind him of who he is and where he came from, remind him what they mean to each other and then, of course, to deliver that killer question that he’s for Jimmy.”

Drew Barrymore opens up about a 'cripplingly difficult' year and how she triumphed: 'I've slayed more dragons'
World News