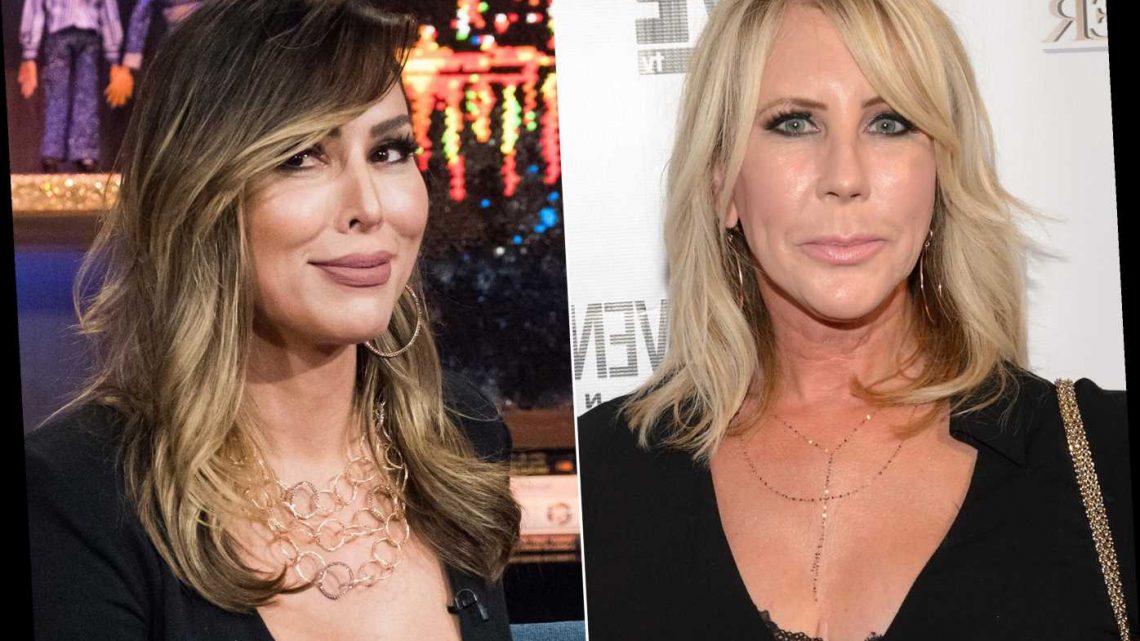 “She has spoken to the producers and has resolved the issues amicably,” says the source close to Gunvalson, 57.

Last week, TMZ reported that Gunvalson was taking legal action against Dodd, 44, after Dodd allegedly made statements that could negatively affect Gunvalson’s reputation and her business. Gunvalson is the president and founder of Coto Insurance & Financial Services, Inc.

According to documents obtained by the outlet, Dodd slammed Gunvalson, who was reduced to a “Friend of the Housewives” this season, while the ladies of OC were shooting in Key West, Florida, allegedly saying, “You prey on older people.”

The lawsuit claimed Dodd also said, “You are a con woman. You engaged in ‘fraud.’ “

In the season 14 first look trailer, Dodd can be heard calling Gunvalson a “con woman.”

According to the legal documents, Gunvalson refuted the claims and explained why they are untrue in writing to producers of the show.

Her reason for previously wanting to take legal action against not only Dodd but also the producers is because Gunvalson believes Dodd’s comments will not be edited out of the show.

“She is tired of the negativity,” says the source.

“Vicki owes a legal and fiduciary obligation to her company, staff and clients. Her intent is to protect Coto Insurance & Financial Services from the meritless accusations from an upcoming episode,” the source says to PEOPLE.

The ladies’ confrontation can be seen in an upcoming episode and the source explains that although Gunvalson is not happy with Dodd’s egregious claims, she ultimately agreed the situation has been resolved.

“Vicki has nothing to hide. She has a lot to say and is attending the reunion taping this week,” the source continues. “She is looking forward to a successful ending of season 14 as it wraps up.”

News of Gunvalson’s lawsuit against Dodd comes after the ladies had an on-screen breakthrough in their ongoing feud in October.

On the episode, the two Orange County Housewives, who saw their close friendship fall apart last season, had a tearful make-up during the cast trip to the Miraval Resort and Spa in Arizona.

Things first started falling apart between the pals when Gunvalson alleged Dodd had a cocaine habit at the RHOC season 13 reunion.

From there, things got even nastier. Gunvalson floated rumors that Dodd had been involved in a “sex train,” and later claimed that Dodd was banned from the school her 13-year-old daughter Jolie attends.

Dodd denied all claims, and retaliated with anger — calling Gunvalson a “liar” and sending her an expletive-packed rant via Apple’s animated emoji feature (Dodd chose the pig, a reference to the Miss Piggy nickname Slade Smiley called Gunvalson back in season 7). She also used a bulldozer to smash a car with Gunvalson’s name on it while visiting the Dig This Amusement Park in Las Vegas, adding a pig drawing to the hood because “that’s exactly what Vicki looks like.”

Nonetheless, their issues seemed to be a thing of the past during the cast’s final dinner in Miraval, where Gunvalson admitted to the table, “I’m ugly.”

She had just heard how Dodd had yet again slammed her appearance by comparing it to a pig. But rather than fight, she told Dodd, “It’s okay.”

Within seconds, both women started crying as they let down their guards and finally looked at one another. “You know what Vicki. I’ve never hurt you,” Dodd said. “I’ve always been on your side. It’s so disheartening for me to sit here and look at you. You don’t know what you’ve done to me. You have no idea and I’ve never done anything to you.”

“I only called you a pig because Slade did and I know that hurts your feelings, but I don’t think that,” Dodd said. “I’ve only been friends with you. I don’t understand it.”

Gunvalson then waved the white flag at Dodd, telling her, “I surrender! I surrender!”

The Olsen Twins Made a Rare Joint Appearance
World News