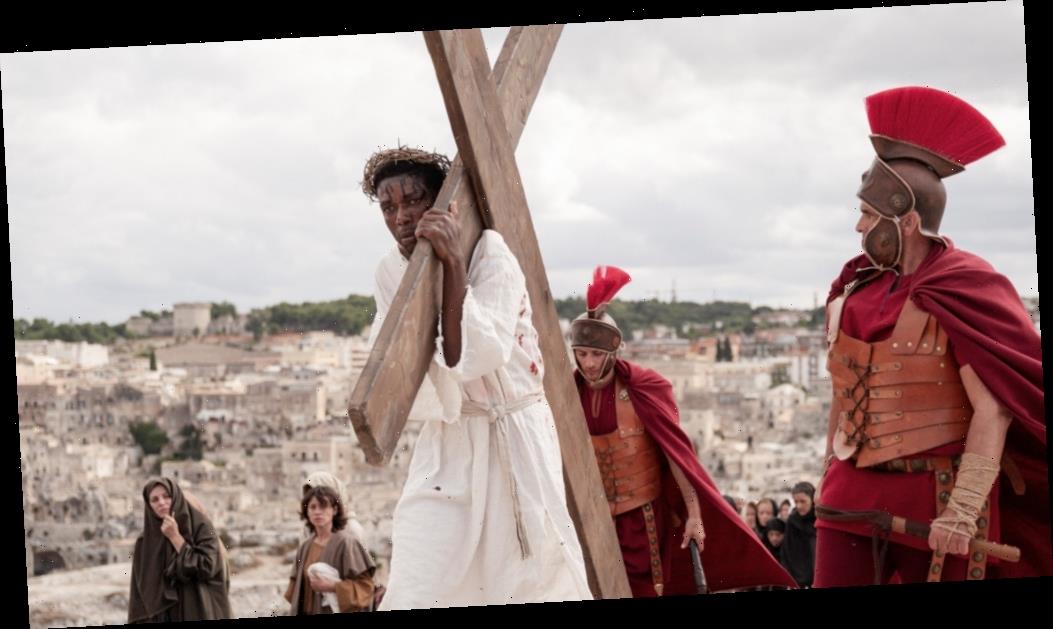 The Bible, according to Milo Rau, “is a book about a guy losing his fight against state power,” but who ultimately prevails by establishing a movement. It is that struggle that he depicts in his new film, “The New Gospel.”

The documentary project is a kind of political Passion Play in which Cameroonian activist Yvan Sagnet portrays a Jesus who leads a revolt for the rights of migrants who have been forced to flee their homelands and cross the Mediterranean only to be “enslaved” on the agricultural fields of southern Italy.

The film, which premieres in Venice Days, is part of Rau’s “Trilogy of Ancient Myths” that began with “Orestes in Mosul” and concludes next year with “Antigone in the Amazon.”

Thematically, “The New Gospel” also follows his 2018 work “The Congo Tribunal,” which examines the causes of the Congolese Civil War, a conflict he describes as the “biggest and bloodiest economic war in human history.”

Speaking to Variety, Rau stresses that the situations in Africa and Europe are “totally interconnected,” noting that we are a “globalized community.” The agrobusiness in southern Italy offers such low-priced fruits and vegetables “because they have the illegal workers that they can exploit,” Rau says.

“These people come from Africa, where we export our chief products and destroy their agriculture. When you go to eastern Congo you will find products from Europe and of course this is absolutely absurd. The people, the farmers that can’t produce there, they come here and then they are enslaved and produce products that destroy their own country. It’s a circle of violence, a circle of exploitation.”

“The New Gospel,” as all of Rau’s works, follows guidelines he introduced in his Ghent Manifesto as artistic director of Beglium’s NTGent theater, foremost of which is “It’s not just about portraying the world anymore. It’s about changing it.”

“I think you can change the world by describing how horrible this world sometimes is, giving insight and empowering the people that are in bad situations, for example by giving them roles in a big production like ‘The New Gospel.’”

“Such projects are having an impact as more and more people learn about how corrupt sectors like Italy’s agrobusiness functions,” Rau adds.

Rau was initially invited by the southern Italian city of Matera to do a project as part of its selection as 2019’s European Capital of Culture. Visiting Matera, Rau discovered the inhumane conditions in nearby refugee camps, corrupt enterprises with links to the mafia and the hundreds of thousands of “slave workers” in the surrounding region.

“Fulfilling the manifesto of NTGhent means to be very honest and to create new ways of producing theater or cinema that empowers the team, the people themselves,” he says.

The production of “The New Gospel” led not only to new housing for the migrant workers but also to a fair trade tomato sauce initiative. A number of factors led to the campaign’s success: structural talks with government officials, support from Pope Francis (who Rau describes as “kind of Marxist”) and the Catholic Church, which is funding the new houses; the fall of former Deputy Prime Minister Matteo Salvini, the rightwing firebrand whose attempt last year to replace Prime Minister Giuseppe Conte failed spectacularly and paved the way for a more liberal government; and the COVID-19 crisis.

In choosing his Jesus, Rau says it had to “be somebody who has the authority to fight for the poor – it can’t be just an actor.” He found a natural talent in Sagnet.

“When I first met him from the first moment I understood that this has to be Jesus because he is the activist leader, but he also has this shy presence.” Like the Jesus of the New Testament, Sagnet is modest, sometimes insecure, but also strong-willed, calculating and politically minded, Rau adds. In organizing the first agrobusiness strikes in southern Italy, Sagnet managed to unite diverse migrant workers by appointing 12 sub-leaders representing 12 communities, like Jesus’ 12 apostles, to create a major solidarity movement of the poor.

“He overcame the divide et impera strategy, he connected all the communities that you have there that are normally divided by politics to make them weak, the Sudanese people, the Congolese people, the people from Romania, the sex workers, even the white Italian farm workers.”

In making “The New Gospel,” Rau also paid tribute to Pier Paolo Pasolini’s 1964 classic “The Gospel According to St. Matthew” and Mel Gibson’s 2004 “The Passion of the Christ,” which also shot in Matera. Rau cast Enrique Irazoqui, who portrayed Jesus in Pasolini’s film, as John the Baptist, and Maia Morgenstern as Mary, the role she played in Gibson’s movie.

Rau’s upcoming projects include a new production of his play “The Repetition,” about the 2012 murder of a gay man in Liège, Belgium; and on Oct. 25 “The Congo Tribunal: Kolwezi Hearings” continues his world economic court of civil society project by putting Swiss mining giant Glencore on trial in Zurich.

He additionally has a book coming out in two weeks, “Why Theater?” in which 100 artists and intellectuals from around the world reflect on the current state of theater.

Rau is also planning to return to Brazil in March for the production of “Antigone in the Amazon,” which will take place in the state of Pará, where state-sponsored mining projects and monoculture soy farming are destroying the Amazon rainforest.