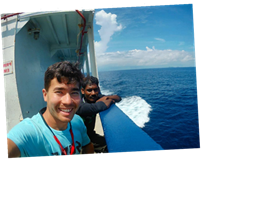 EXCLUSIVE: In November 2018, John Allen Chau was killed by an isolated tribe on an island in the Indian ocean that he was trying to convert to Christianity.

This story is now being developed as a limited TV series by UCP, a division of Universal Studio Group, and Happy! and Dr. Death showrunner Patrick Macmanus.

The studio won the rights, in a competitive situation, to option the rights to J. Oliver Conroy’s 2019 Guardian Observer article, The Life and Death of John Chau, The Man Who Tried To Convert His Killers. Author Conroy is repped by CAA.

The Life and Death of John Allen Chau will tell the story of the 26-year old Chinese American, who believed he was called by God to save the souls of the last ‘uncontacted tribe’ on earth by converting them to Christianity.

The newspaper feature explores how Chau, who regularly blogged his adventures, got to the island and some of his last movements as well as his father’s belief that the American missionary community was “culpable” in his son’s death.

The drama will be exec produced by Macmanus, who has an overall deal with UCP, under his production banner Littleton Road Productions with Kelly Funke. Bernie Cahill, Jon Kanak and Jaime Murray of Activist Artists Management will also executive produce.

It is the latest real life story to be turned into a TV series by UCP, which is also developing Robin Veith’s Candy, based on the true story of killer Candy Montgomery, starring Elizabeth Moss and executive produced by Nick Antosca, and the untitled Jan Broberg project, also from Antosca, based on the saga of the Broberg family, whose daughter Jan was kidnapped multiple times over a period of years by a charismatic, obsessed family friend.

UCP is also producing Peacock’s Dr. Death, based on the Wondery podcast, Hulu’s Elle Fanning-fronted drama The Girl From Plainville, written by Liz Hannah and Macmanus, inspired by the true story of Michelle Carter’s controversial texting-suicide case, and the Joe Exotic limited drama for NBCU’s platforms.

CategoryTV & Movies
TagsThe Life and Death of John All

House of Eleven: Darcey & Stacey explain how they chose the name of their company

How Season 29 of DWTS Will Be Different, from COVID-19 Precautions to a New Host
World News