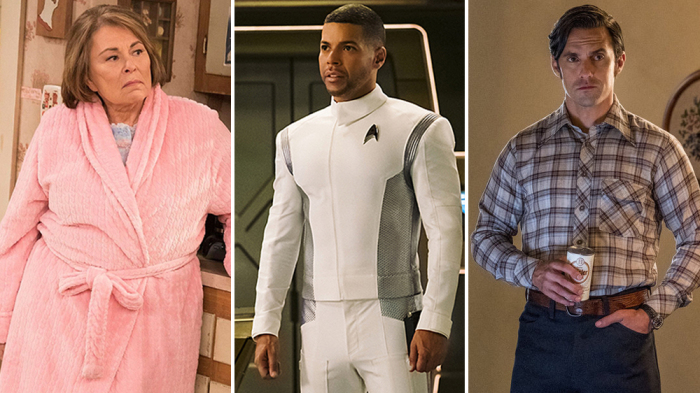 TV’s Most Meaningful Deaths of 2018

To cap off the year in television, Variety selected the series that provided the most impactful losses of prominent characters and proved that saying goodbye can sometimes just mean the start of a new chapter for those left behind.

“American Horror Story: Apocalypse” — Michael Langdon
It shouldn’t be easy to kill the Antichrist, and in all fairness, it didn’t seem to be for the majority of the eighth season of Ryan Murphy’s FX anthology drama. Bullets wouldn’t stop him and spells could only slow him down, so in the end, a combination of manpower and magic was needed to do the deed. Mallory (Billie Lourd) traveled back in time to a moment in Michael’s (Cody Fern) life when he hadn’t come into his full powers yet. Suddenly shot up to his teenage years overnight, he was scared by his abilities and recently cast out into the street — literally — by his grandmother. That’s where Mallory found him, hitting him with a Range Rover, but she didn’t stop there. She backed up, hit him again, and then rolled over him one more time for safety, leaving him to bleed out in front of Murder House, ultimately resetting the timeline so the events of the season never occurred at all.

“Fear the Walking Dead” — Madison Clark and Nick Clark
Midway through the fourth season of AMC’s “The Walking Dead” spinoff it lost two of its original characters and core Clark family members. Nick (Frank Dillane) was the first to go, shot squarely in the chest by a little girl who was working as a mole for the group of hostile survivors (Vultures) who were threatening the new way of life. In many ways it was a surprising end — Nick, after all, had seemed to be immortal with the way he’d slather blood on his face and walk among the undead — but it was also a fitting one, in that it drove home that even with supernatural creatures among them, other humans were still the greatest danger. And just a few episodes later, Nick’s mother Madison (Kim Dickens) came to her own unfortunate end, due in part to those Vultures, who had sent a bunch of zombies in. Seeing her kids trapped in the middle of the walkers, Madison lured a large number of them to the stadium and got trapped inside with them. She chose to burn the place down with her flare, sacrificing herself, as well as part of their new home.

“The Haunting of Hill House” — Nell Crain
Mike Flanagan’s Netflix limited series adaptation of Shirley Jackson’s story featured a lot of dead characters in the forms of “house ghosts,” but it was the loss of the youngest Crain child, Nell (Victoria Pedretti) that provided the biggest emotional punch. Although the action came early in the show’s run, the true understanding of what led to it took a lot longer to unfold, psychologically toying with her family members on-screen and the audience, off. After years of being tormented by visions of the “Bent-Neck Lady,” Nell hanged herself, and that was hard to take by itself. But learning that she, in fact, was the “Bent-Neck Lady,” and what her younger self was seeing were visions of her own fatal future was on a whole other level.

“House of Cards” — Frank Underwood and Doug Stamper
Sure, Frank’s death was off-screen in the wake of sexual assault allegations surfacing against star Kevin Spacey, resulting in him having to be written off the show. But the act still lingered large over the sixth and final season as questions about exactly what befell him rumbled in viewers’ heads. Revealing that his former Chief of Staff Doug (Michael Kelly) was actually the one to take him down was memorable in and of itself for the way it played with his loyalty, but then the show proved fatal for him, too, when Claire (Robin Wright) stabbed him with the very letter opener with which he had been threatening her. Talk about going out with a bang.

“New Girl” — Ferguson Bishop
Winston’s (Lamorne Morris) beloved cat met his end just before the show itself wrapped its seven-season run. Ferguson died of natural causes and certainly left a hole in his BBF’s heart. Although Winston was in a stable romantic partnership, Ferguson was certainly his longest relationship. He cared for that cat like he would a child, which was fitting since in the final season he was actually preparing for the birth of his first (human) child. In many ways saying goodbye to Ferguson was a way to close the chapter on the loft members’ less mature lives and fully throw them into their new adventures as grown adults.

“Roseanne” — Roseanne Conner
ABC’s revival of the classic 1980s and 1990s sitcom was a proven ratings performer for the broadcaster, but when its star sent a racist Tweet aimed at former political aide Valerie Jarrett, she was fired and killed off. The character, who had developed an opioid addiction in its first revival season, succumbed to it off-screen so when the rebranded “The Conners” launched without her, it could do so with some commentary about an epidemic sweeping the country.

“Scandal” — David Rosen
There was only one true, consistent White Hat throughout the seven year run of Shonda Rhimes’ ABC fixer drama — so of course he could not survive. Attorney General David Rosen was poisoned and suffocated by Vice President Cyrus Beene (Jeff Perry), just a few scenes after Jake (Scott Foley) held a gun on David. When he survived that encounter, some viewers may have left out a sigh of relief, but it proved to just be temporary.

“Star Trek: Discovery” — Dr. Hugh Culber
Watching Dr. Hugh Culber (Wilson Cruz) get his neck snapped on the CBS All Access drama came with a double whammy of emotions. While the action proved that he had been correct about Ash Tyler (Shazad Latif) being taken over by a Klingon, it came at the cost of his own life. And it also signified the end of a core couple on the show — notably a same-sex couple, just six months after a study found the “bury your gays” trope had reached an all-time high.

“Supernatural” — Lucifer
Let’s face it, it takes a lot to evoke surprise in viewers who have been watching a show for 14 years, but that is what this long-running CW demon-hunting drama did when it finally killed the devil himself at the end of the 13th season. After years of being taunted by the dark one — and after his portrayer, Mark Pellegrino had just finally been made a series regular — Dean (Jensen Ackles) took him down with a stab of an archangel blade. Despite death being temporary for so many beings on this show, the devil was squashed, and when Season 14 premiered, Pellegrino was back just as the meat suit Lucifer had inhabited for years, a regular ole human named Nick.

“This Is Us” — Jack Pearson
It took a season and a half before NBC’s cry-jerker of a family drama spilled all of the beans about how its patriarch passed away. Jack (Milo Ventimiglia) saved his family from a house fire but ran back in for the dog and some cherished family mementos. This caused him to inhale a lot of smoke, which, combined with a preexisting condition, ultimately led to him having a heart attack at the hospital just a short time later. The question of what took down the seemingly perfect family man had been on viewers’ minds literally for months, and once the answers came, the show was able to move onto other tales from other time periods in the man’s life.

“The Walking Dead” — Carl Grimes
Young Carl (Chandler Riggs) committed an act of mercy in helping a mysterious loner kill a few walkers, and he received his own death sentence as a reward. Bit during a fight with a member of the undead population, Carl reacted quite well to the news that he was not long for the world, though. Perhaps it was because his life had prepared him for such an end, or perhaps it was because he still had some time to say his goodbyes (in person with his sister and father and through notes to friends), but he seemed wise beyond his years in his final moments. And perhaps most importantly, he got to go out on his own terms, shooting himself in the church before he could turn.